Highland Falls, formerly named Buttermilk Falls, is a village in Orange County, New York, United States. The population was 3,900 at the 2010 census. The village was founded in 1906. It is part of the Poughkeepsie–Newburgh–Middletown, NY Metropolitan Statistical Area as well as the larger New York–Newark–Bridgeport, NY-NJ-CT-PA Combined Statistical Area.

Highland Falls is in the Town of Highlands and is adjacent to the United States Military Academy at West Point.

Highland Falls is located at Lua error in Module:Coordinates at line 668: callParserFunction: function "#coordinates" was not found..[1]

There were 1,647 households out of which 29.5% had children under the age of 18 living with them, 40.9% were married couples living together, 14.1% had a female householder with no husband present, and 40.0% were non-families. 34.5% of all households were made up of individuals and 10.9% had someone living alone who was 65 years of age or older. The average household size was 2.37 and the average family size was 3.07. 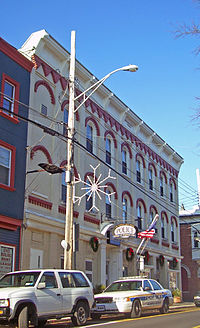 Village Hall, listed on the National Register of Historic Places

There was also a parochial school, Sacred Heart of Jesus School, that served students in grades pre-kindergarten through eight. The school closed in June 2011.

Ladycliff Academy existed in the Village of Highland Falls from 1900 to 1961. Ladycliff College existed on the same campus from 1933 to 1981. This campus was located on lands formerly known as Cranston's Hotel, and before that Cozzen's Hotel on the east side of the village overlooking the Hudson River.