The organisation was created as an executive agency on 30 March 1994.[2] The Chief Executive, Jim O'Sullivan assumed his post on 1 July 2015, replacing Graham Dalton in that role.[3]

Following the announcement made on 27 June 2013 by Danny Alexander, Chief Secretary to the Treasury, it became a government-owned company on 1 April 2015.[4] 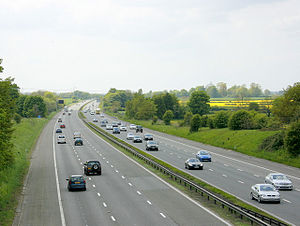 The M4 Motorway is managed by Highways England.

Highways England's operations are split into six regions[5] that are roughly based on the regions of England. These regions are subdivided into 13 operational areas.[6] These areas are each managed and maintained by an area team and a contractor, known respectively as the Managing Agent (MA) and the Managing Agent Contractor (MAC). In addition, there are a number of sections of road that are managed under DBFO contracts separately from the area teams.[6]

The £57 million service is based at Quinton, Birmingham and is responsible for providing accurate, historical, real-time and predictive traffic and incident information to businesses, the travelling public and Highways England's operations.[20] It collects real-time traffic information from over 10,000 fixed sites on the motorway and all-purpose trunk road network from MIDAS and Traffic Monitoring Unit (TMU) electronic loops in the road surface and automatic number plate recognition (ANPR) cameras at the roadside. Additionally it uses anonymous floating vehicle traffic data (FVD) from vehicles to supplement the fixed traffic monitoring sites.[citation needed] NTIS also has access to nearly 2,000 CCTV cameras,[21] 300 weather stations, 4,600 roadside electronic signs, 16,000 roadside electronic matrix signals and incident data from over 250 operational partners including the police and local authorities.[22]

It then processes this data to create useful intelligence for operational decision making and dissemination of current and predictive information to the public using the 4,600 roadside variable-message signs,[23] the Highways England website[24] (including a mobile version), social media channels such as Twitter and the telephone-based Highways England customer contact centre[25] as well as distributing information to the media and business through a number of data feeds[21][26] These feeds are widely used by organisations such as the BBC and local newspaper websites for their own traffic information. Services such as Google maps and satnav operators also make use of Highways England's data for their traffic information.

The motorway network is divided into "Areas". They are contracts that are awarded by the Department for Transport. The Area Teams work alongside the Highways England Traffic Officer Service – providing incident support, emergency traffic management and infrastructure maintenance. They are responsible for the management and operation of the roads in their area.[27] In 2009, fleet tracking has been deployed to assist area teams to manage their specialist winter maintenance vehicles during the Cold Snap.[28]

Highways England employs uniformed traffic officers; on-road and control room, as well as specialist staff for work in engineering, surveying, accountancy, and administration. There is a graduate entry scheme, with general entry and specialist engineering entry options.[29] For the Traffic Officer Service each team is supervised by a team manager, one of between six and eight such managers generally working together, to ensure 24-hour management cover.

Traffic England is a website[30] that gives information about the latest traffic conditions as well as details of any roadworks or events that may cause congestion.[31] By selecting current motorway information users can see the average speed between individual motorway junctions, what is being displayed on all the variable-message signs, and images from traffic cameras.[31] The website is run by Highways England's National Traffic Information Service.

The Survive Group is a partnership between Highways England, the Association of Chief Police Officers (ACPO), the breakdown/recovery industry and other road service providers. The Survive Group has been established to improve the safety of those who work on the road network and the travelling public and is also dedicated to the promotion of driving safety. The name Survive comes from Safe Use of Roadside Verges in Vehicular Emergencies.

The Survive Group website holds information on the Survive Group membership details and activities being undertaken by the working groups. It also supplies advice on how to drive safely in a wide range of driving conditions, advice on planning journeys. Survive also provides publications and new guidance produced by the Survive members plus news on new initiatives and forthcoming road safety events.[32]

In 2013, Highways England took over responsibility for the Historical Railways Estate from BRB (Residuary) Limited.[33]