Hilda of Whitby or Hild of Whitby (c. 614–680) is a Christian saint and the founding abbess of the monastery at Whitby, which was chosen as the venue for the Synod of Whitby. An important figure in the conversion of Anglo-Saxon England to Christianity, she was abbess at several monasteries and recognized for the wisdom that drew kings to her for advice.

The source of information about Hilda is The Ecclesiastical History of the English by the Venerable Bede in 731, who was born approximately eight years before her death. He documented much of the Christian conversion of the Anglo-Saxons.

According to Bede, Hilda was born in 614, into the Deiran royal household. She was the second daughter of Hereric, nephew of Edwin of Northumbria, and his wife Breguswith.[1]

When Hilda was still an infant, her father was poisoned while in exile at the court of the British King of Elmet in what is now West Yorkshire. In 616 CE, Edwin killed the son of Aethelric, Aethefrith, in battle. He created the kingdom of Northumbria and took the throne.[1] Hilda was brought up at King Edwin's court.

In 625, the widowed Edwin married the Christian princess, Æthelburh of Kent, daughter of King Æthelberht of Kent and the Merovingian princess Bertha of Kent. As part of the marriage contract, Aethelburgh was allowed to continue her Roman Christian worship and was accompanied to Northumbria with her chaplain, Paulinus of York, a Roman monk sent to England in 601 to assist Augustine of Canterbury. Augustine's mission in England was based in Kent, and is referred to as the Gregorian mission after the pope who sent him.[2] As queen, Æthelburh continued to practice her Christianity and no doubt influenced her husband's thinking as her mother Bertha had influenced her father.

In 627 King Edwin was baptised on Easter Day, 12 April, along with his entire court, which included the thirteen-year-old Hilda,[2] in a small wooden church hastily constructed for the occasion near the site of the present York Minster.

In 633 Northumbria was overrun by the neighbouring pagan King of Mercia, at which time King Edwin fell in battle. Paulinus accompanied Hilda and Queen Ethelburga and her companions to the Queen's home in Kent. Queen Ethelburga founded a convent at Lyminge and it is assumed that Hilda remained with the Queen-Abbess.[3] Hilda's elder sister, Hereswith, married Ethelric, brother of King Anna of East Anglia, who with all of his daughters became renowned for their saintly Christian virtues. Later, Hereswith became a nun at Chelles Abbey in Gaul (modern France). Bede resumes Hilda's story at a point when she was about to join her widowed sister at Chelles Abbey. At the age of 33, Hilda decided instead to answer the call of Bishop Aidan of Lindisfarne and returned to Northumbria to live as a nun.[1] 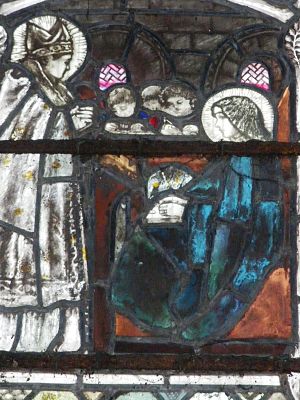 Hilda's original convent is not known except that it was on the north bank of the River Wear. Here, with a few companions, she learned the traditions of Celtic monasticism, which Bishop Aidan brought from Iona. After a year Aidan appointed Hilda as the second Abbess of Hartlepool Abbey.[4] No trace remains of this abbey, but its monastic cemetery has been found near the present St Hilda's Church, Hartlepool.

In 657 Hilda became the founding abbess of Whitby Abbey, then known as Streoneshalh; she remained there until her death.[5] Archaeological evidence shows that her monastery was in the Celtic style, with its members living in small houses, each for two or three people. The tradition in double monasteries, such as Hartlepool and Whitby, was that men and women lived separately but worshipped together in church. The exact location and size of the church associated with this monastery is unknown.

Bede states that the original ideals of monasticism were maintained strictly in Hilda's abbey. All property and goods were held in common; Christian virtues were exercised, especially peace and charity. Everyone had to study the Bible and do good works.

Five men from this monastery later became bishops[4] and two also join Hilda in being revered as saints - John of Beverley, Bishop of Hexham, and Wilfrid, Bishop of York. They rendered untold service to the church at this critical period of the struggle with paganism.

Bede describes Hilda as a woman of great energy, who was a skilled administrator and teacher. As a landowner she had many in her employ to care for sheep and cattle, farming and woodcutting. She gained such a reputation for wisdom that kings and princes sought her advice.[4] She also had a concern for ordinary folk such as Cædmon, however. He was a herder at the monastery, who was inspired in a dream to sing verses in praise of God. Hilda recognized his gift and encouraged him to develop it. Bede writes, "All who knew her called her mother because of her outstanding devotion and grace".[5]

The Synod of Whitby

The prestige of Whitby is reflected in the fact that King Oswiu chose Hilda's monastery as the venue for the Synod of Whitby,[2] the first synod of the Church in his kingdom. He invited churchmen from as far away as Wessex to attend the synod. Most of those present, including Hilda, accepted the King's decision to adopt the method of calculating Easter currently used in Rome, establishing Roman practice as the norm in Northumbria. The monks from Lindisfarne, who would not accept this, withdrew to Iona and later, to Ireland.

Hilda suffered from a fever for the last seven years of her life, but she continued to work until her death on 17 November 680 AD, at what was then the advanced age of sixty-six. In her last year she set up another monastery, fourteen miles from Whitby, at Hackness. She died after receiving viaticum, and her legend holds that at the moment of her death the bells of the monastery of Hackness tolled. A nun there named Begu claimed to have witnessed Hilda's soul being borne to heaven by angels.[6]

A local legend says that when sea birds fly over the abbey they dip their wings in honour of Saint Hilda. Another legend tells of a plague of snakes which Hilda turned to stone, supposedly explaining the presence of ammonite fossils on the shore; heads were carved onto these 'petrified snakes' to honour this legend.[7] In fact, the ammonite genus Hildoceras takes its scientific name from St. Hilda. It was not unknown for local “artisans” to carve snakes' heads onto ammonites, and sell these “relics” as proof of her miracle. The coat of arms of nearby Whitby includes three such 'snakestones', and depictions of ammonites appear in the shield of the College of St Hild and St Bede, Durham.[8] A carved ammonite stone is set into the wall by the entrance to the former chapel of St Hild's College, Durham, which later became part of the College of St Hild and St Bede.

The veneration of St. Hilda from an early period is attested by the inclusion of her name in the calendar of St. Willibrord, written at the beginning of the eighth century. According to one tradition, her relics were translated to Glastonbury by King Edmund, Another tradition holds that St. Edmund brought her relics to Gloucester. [9]

Hilda is considered one of the patron saints of learning and culture, including poetry, due to her patronage of Cædmon. St. Hilda is the patron saint of the National Cathedral School for Girls in Washington, D.C.

In addition, St. Hilda's College Oxford University, established in 1893 for female students, remained with that status for over 100 years, before turning co-educational when it was deemed that the percentage of women studying at Oxford had risen to near 50 percent. The symbol of the college is the ammonite of St Hilda and during the centenary, 100 silver amonites were created; now proudly owned by alumni of the college in honour of St. Hilda's achievements - and those of the first 100 years of female students at the College.

St Hilda is generally depicted with a pastoral staff and carrying an abbey church. Often, there are ammonites at her feet.[5] 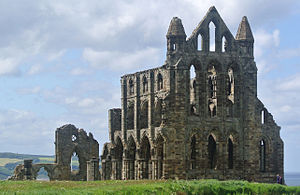 Hilda was succeeded as abbess by Eanflæd, widow of King Oswiu, and their daughter, Ælfflæd. From then onward we know nothing about the abbey at Whitby until it was destroyed by the Danish invaders in 867. After the Norman conquest of England that began in 1066 AD, monks from Evesham re-founded the abbey as a Benedictine house for men. Thus it continued until the Dissolution of the Monasteries by King Henry VIII in 1539.

There is said to be the wraith of St Hilda, who appears in the ruins wrapped in a shroud, and the bells of the Abbey can be heard ringing under the water, where they sank with the ship taking them to London after the Abbey was dismantled.[10]

Two churches in Whitby, (Roman Catholic[11] and Anglican), have been dedicated under her patronage and another, in Bilsborrow, Lancashire.

There is an Anglican church named after St. Hilda in the Cross Green area of Leeds. It was opened in September 1882. There is a statue of St. Hilda in the nave, depicting her as the Mother of her Abbey at Whitby. She also appears in a stained glass window at the east end of the church. The church still is active and a sung mass is held there every Sunday. Several small streets in the immediate area are named after the church - St. Hilda's Mount, St. Hilda's Road, among them.

A community of Anglican sisters, the Order of the Holy Paraclete was founded in 1915 at St. Hilda's Priory, [12] on the western edge of Whitby town. More recently, the Community of St. Aidan and St. Hilda has been founded on Lindisfarne.

St. Hilda has become the patron of many schools and colleges all over the world. The College of St Hilda and St Bede, Durham, St Hild's Church of England School, Hartlepool, St Hilda's College, Oxford and St Hilda's Collegiate School, Dunedin are named after Saint Hilda. A stone from the thirteenth century ruins of Whitby Abbey where St Hilda founded the Monastery of Streoneshalh c657AD was donated to St Hilda's College (University of Melbourne) by the Whitby Urban Council. This stone is located at the College entrance.[10]

St. Hilda's College, University of Toronto is the women's college of University of Trinity College. Saint Hilda is honoured as co-patron (with Our Lady). Daily services are held in the Lady Chapel by Trinity's Faculty of Divinity.

There are two schools situated in Australia in recognition of St. Hilda. They are both 'St. Hilda's Anglican School for Girls' which is an independent, girls' school in Southport,[14] South-East Australia and Mosman Park, Western Australia.[15]

On the upper west side of Manhattan in New York City is St. Hilda's and St. Hugh's School, an independent Episcopal day school that opened its doors in 1950. The school is coeducational and includes toddlers through grade eight.

St. Hilda is honoured in Singapore in the St. Hilda's Primary and Secondary schools.

Another novel of 2015 is "The Abbess of Whitby" by Jill Dalladay.

She appears as a main character in Absolution for Murder, the first book in Peter Tremayne's Sister Fidelma mysteries.