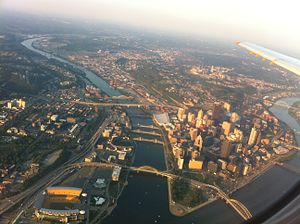 The Hill District is the largely green area visible above downtown Pittsburgh in this aerial photo.

The Hill District is a historic African-American collection of neighborhoods in the City of Pittsburgh, Pennsylvania. Beginning in the years leading up to World War I "the Hill" was the cultural center of African-American life in the city and a major center of jazz.[1] Despite its cultural and economic vibrancy, in the mid-1950s a substantial area was slated for "redevelopment," displacing about 8000 individuals and leading to the neighborhood's dramatic economic decline.

The boundaries of the Hill District have shifted over the years. As of 2010 the area comprises Census Tracts 305 (Crawford Roberts, "Lower Hill"), 501 (Crawford-Roberts, "Middle Hill), 506 (Upper Hill), 509 (Bedford Dwellings), 510 and 511 (Terrance Village).[3] is bordered by the Downtown on the west, the Strip District and Polish Hill on the north, the Bluff (Uptown) on the southwest, and Oakland on the east and southeast.

For over two centuries, the African-American community of Hill District has had a direct relationship with Haitian descendants, as the oldest black community in Pittsburgh was called "Little Haiti" in the early nineteenth century and consisted of a middle-class of free blacks.[4][5]

Beginning in the 1910s, the Hill attracted populations from elsewhere in the United States (particularly from the American South) and from abroad, creating a vibrant and diverse social landscape, and leading to its popular image as "the crossroads of the world."[6] That phrase, attributed to Harlem Renaissance poet Claude McKay,[7] was popularized by radio DJ Mary Dee (Mary Dee Dudley), of WHOD Radio,[8] Pittsburgh's only black radio station.[9]

Despite this cultural vibrancy, and the substantial presence of successful entertainment venues and black-owned business, 95 acres fell victim to post-war redevelopment plans. In an article from 1943, George E. Evans, a member of City Council, reasoned that public-private redevelopment could provide significant employment to returning war veterans, while ameliorating what he saw as an area beset by deterioration and urban blight. He wrote, "The Hill District of Pittsburgh is probably one of the most outstanding examples in Pittsburgh of neighborhood deterioration... There are 7,000 separate property owners; more than 10,000 dwelling units and in all more than 10,000 buildings. Approximately 90 per cent of the buildings in the area are sub-standard and have long outlived their usefulness, and so there would be no social loss if they were all destroyed."[10]

In expressing this opinion, Evans was merely representing the majority view of Pittsburgh politicians, including, oddly, Homer S. Brown. Born in West Virginia, Brown was the third African-American to graduate from the University of Pittsburgh law school and was active in civic affairs. He established a law practice, became president of the local NAACP and served in state legislature, with the support of black and white voters. In the 1940s, working with David Lawrence, Richard King Mellon, and other business leaders, he drafted legislation that opened the way to "urban renewal" in the Hill District, and in the next decade, authorized the removal of 1,500 black families, making way for the Civic Arena.[11]

In the summer of 1956 1,300 structures were razed displacing about 1,500 families (over 8000 residents), the great majority of which were black.[1] This strategy cleared the way for the construction of the Civic Arena and adjacent parking, but severed the Hill District from surrounding neighborhoods, leading to its dramatic economic decline. This structural problem was exacerbated by the decline of Pittsburgh's population more genearlly. Between 1950 and 1990, the Hill lost 71% of its residents (over 38,000 individuals) [12] and about 400 businesses [13]

Many displaced people moved into the East Liberty and Homewood-Brushton neighborhoods, causing middle-class families (white and black) to flee these areas.[14][15]

Recent initiatives have aimed to redestroy the area, which has struggled for decades with varying levels of dilapidation and crime.[16] About 40 percent of the Hill District's residents live below poverty level, and the vast majority of residents are black or African American; about 6 percent of the population is white.[17]

A project to open a new grocery store — the neighborhood lacked one for 30 years — came to fruition in late 2013.[18] The YMCA is building a $9 million branch in the neighborhood, complete with a rooftop garden. A group of investors have gathered to restore the New Granada Theater, a historic jazz club where Ella Fitzgerald and Duke Ellington once performed.[16] Local college Duquesne University opened a new pharmacy in the neighborhood in December 2010,[19] the first university-operated community pharmacy in the US.[20]

In art and popular culture

The Hill District was the setting for nine of the 10 plays in August Wilson's Pittsburgh Cycle.[21]

The TV Show Hill Street Blues ties its name origin back to the Hill District. Steven Bochco, a series writer for the show, attended college at the nearby Carnegie Institute of Technology (now Carnegie Mellon University) and based the show on the neighborhood.[22]