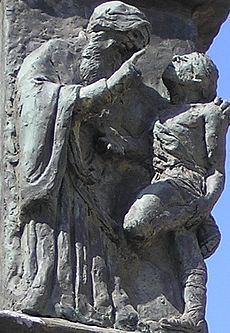 Detail of the Knesset Menorah, Jerusalem: Hillel the Elder teaching a man the meaning of the whole Torah while he stands on one foot

Hillel (Hebrew: הלל; variously called Hillel HaGadol, or Hillel HaZaken, Hillel HaBavli[1] or HaBavli;[2] born according to tradition in Babylon c. 110 BCE, died 10 CE[3] in Jerusalem) was a famous Jewish religious leader, one of the most important figures in Jewish history. He is associated with the development of the Mishnah and the Talmud. Renowned within Judaism as a sage and scholar, he was the founder of the House of Hillel school for Tannaïm (Sages of the Mishnah) and the founder of a dynasty of Sages who stood at the head of the Jews living in the Land of Israel until roughly the fifth century of the Common Era.

He is popularly known as the author of two sayings: (1) "If I am not for myself who is for me? And being for my own self, what am 'I'? And if not now, when?"[4] and (2) the expression of the ethic of reciprocity, or "Golden Rule": "That which is hateful to you, do not do to your fellow. That is the whole Torah; the rest is the explanation; go and learn."[5]

Hillel lived in Jerusalem during the time of King Herod and the Roman emperor Augustus. In the Midrash compilation Sifre (Deut. 357), the periods of Hillel's life are made parallel to those in the life of Moses. Both lived 120 years (Deut. 34:7), and at the age of forty Hillel went to the Land of Israel; forty years he spent in study; and the last third of his life he was the spiritual head of the Jewish people. A biographical sketch can be constructed; that Hillel went to Jerusalem in the prime of his life and attained a great age. His activity of forty years likely covered the period of 30 BCE to 10 CE.

"Do not judge your fellow until you are in his place."

Hillel the Elder on being judgmental.[7][8]

Hillel was born in Babylon and, according to the Iggeret of Rav Sherira Gaon (a comprehensive history of the composition of the Talmud from the 10th century), Hillel descended from the Tribe of Benjamin on his father's side, and from the family of David on his mother's side.[9]

When Josephus ("Vita," § 38) speaks of Hillel's great-grandson, Rabban Shimon ben Gamliel I, as belonging to a very celebrated family (γένους σφόδρα λαμπροῦ), he probably refers to the glory the family owed to the activity of Hillel and Rabban Gamliel Hazaken. Only Hillel's brother Shebna is mentioned; he was a merchant, whereas Hillel devoted himself to studying the Torah whilst also working as a woodcutter (Hertz 1936).

According to the Mishnah Hillel went to Jerusalem with the intention of studying biblical exposition and tradition at the age of 40 in 70 BCE. The difficulties Hillel had to overcome to gain admittance to the school of Sh'maya and Abtalion, and the hardships he suffered while pursuing his aim, are told in a touching passage (Talmud, tractate Yoma 35b), the ultimate purpose of which is to show that poverty cannot be considered an obstacle to the study of Torah. Some time later, Hillel succeeded in settling a question concerning the sacrificial ritual in a manner that showed his superiority over the Benei Betheira (literally, sons of Betheira), who were at that time the heads of the Sanhedrin. On that occasion, it is narrated, they voluntarily resigned their position as Nasi (President) in favor of Hillel. After the resignation of the Benei Betheira, Hillel was recognized as the highest authority among the Pharisees (predecessors to Rabbinic Judaism). Hillel was the head of the great school, at first associated with Menahem the Essene, who might be the same Menahem the Essene as the one mentioned by Flavius Josephus in relation to king Herod, afterward with Shammai, Hillel's peer in the teaching of Jewish Law.

Whatever Hillel's position, his authority was sufficient to introduce those decrees handed down in his name. The most famous of his enactments was the Pruzbul, (προσβολή), an institution that, in spite of the law concerning cancellation of debts in the Sabbatical year (Deut. xv) ensured the repayment of loans. The motive for this institution was the "repair of the world", i.e., of the social order, because this legal innovation protected both the creditor against the loss of his property, and the needy against being refused the loan of money for fear of loss. A likewise tendency is found in another of Hillel's institutions, having reference to the sale of houses. These two are the only institutions handed down in Hillel's name, although the words that introduce the pruzbul show that there were others. Hillel's judicial activity may be inferred from the decision by which he confirmed the legitimacy of some Alexandrians whose origin was disputed, by interpreting the marriage document (ketubah) of their mother in her favor (Tosef., Ket. iv 9; B. M. 104a). Of other official acts no mention is found in the sources.

The saying of Hillel that introduces the collection of his maxims in the Mishnaic treatise Pirkei Avoth mentions Aaron HaKohen (the high priest) as the great model to be imitated in his love of peace, in his love of man, and in his leading mankind to a knowledge of the Law (Pirkei Avoth 1:12).

In mentioning these characteristics, which the Haggadah attributes to Moses' brother, Hillel stated his own prominent virtues. He considered "love of man" the kernel of Jewish teaching.

The comparative response to the challenge of a Gentile who asked that the Torah be explained to him while he stood on one foot, illustrates the character differences between Shammai and Hillel. Shammai dismissed the man. Hillel accepted the question but gently chastised the man:

"What is hateful to you, do not do to your fellow: this is the whole Torah; the rest is the explanation; go and learn"[10]

From the doctrine of man's likeness to God, Hillel deduced man's duty to care for his own body. According to Midrash Leviticus rabbah he said "As in a theater and circus the statues of the king must be kept clean by him to whom they have been entrusted, so the bathing of the body is a duty of man, who was created in the image of the almighty King of the world." In this work, Hillel calls his soul a guest upon earth, toward which he must fulfill the duties of charity.

In Avot, Hillel stated "If I am not for myself, who is for me? And when I am for myself, what am "I"? And if not now, when?"[4] The third part contains the admonition to postpone no duty, the same admonition he gave with reference to study (Avot 2:4): "Say not, 'When I have free time I shall study'; for you may perhaps never have any free time."

The precept that one should not separate oneself from the community, Hillel paraphrases, with reference to Eccl. iii. 4, in the following saying (Tosef., Ber. ii.): "Appear neither naked nor clothed, neither sitting nor standing, neither laughing nor weeping." Man should not appear different from others in his outward deportment; he should always regard himself as a part of the whole, thereby showing that love of man Hillel taught. The feeling of love for one's neighbor shows itself also in his exhortation (Avot ii. 4).

Hillel’s awareness of his own insufficiency is expressed in the following maxim: "Don't trust yourself until the day you die." How far his love of man went may be seen from an example that shows that benevolence must be given with regard to the needs of the poor. Thus, Hillel provided to a man of good family who became poor, a riding horse, in order that he not be deprived of his customary physical exercise, and a slave, that he might be served (Tosef., Peah, iv. 10; Ket. 67b).

The exhortation to love peace emanated from Hillel's most characteristic traits—from that proverbial meekness and mildness—as in the saying: "Let a man be always humble and patient like Hillel, and not passionate like Shammai" (Shab. 30b; Ab. R. N. xv.). Hillel's gentleness and patience are illustrated in an anecdote that describes how two men made a wager on the question of whether Hillel could be made angry. Though they questioned him and made insulting allusions to his Babylonian origin, they were unsuccessful (ib.).

The study of Torah

The many anecdotes according to which Hillel made proselytes, correspond to the third part of his maxim: "Bring men to the Law." A later source (Ab. R. N.) gives the following explanation of the sentence: Hillel stood in the gate of Jerusalem one day and saw the people on their way to work. "How much," he asked, "will you earn to-day?" One said: "A denarius"; the second: "Two denarii." "What will you do with the money?" he inquired. "We will provide for the necessities of life." Then said he to them: "Would you not rather come and make the Torah your possession, that you may possess both this and the future world?"

This narrative has the same points as the epigrammatic group of Hillel's sayings (Avot. 2:7) commencing: "The more flesh, the more worms," and closing with the words: "Whoever has acquired the words of the Law has acquired the life of the world to come." In an Aramaic saying Hillel sounds a warning against neglect of study or its abuse for selfish purposes: "Whoever would make a name (i.e. glory) loses the name; he who increases not [his knowledge] decreases; whoever learns not [in Ab. R. N. xii.: "who does not serve the wise and learn"] is worthy of death; whoever exploits for his own use the crown (of Torah) perishes" (Avot. 1:13).

Hillel's influence: "House of Hillel" vs. "House of Shammai" 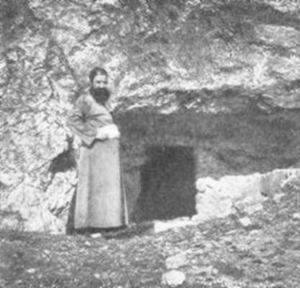 Hillel's disciples are generally called the "House of Hillel", in contrast to Shammai's disciples, the "House of Shammai". Their controversies concern all branches of the Jewish law. Only a few decisions have been handed down under Hillel's name; but there can be no doubt that much of the oldest anonymous traditional literature was due directly to him or to the teachings of his masters. The fixation of the norms of the Midrash and of halakhic Scripture exposition was first made by Hillel, in the "seven rules of Hillel," which, as is told in one source, he applied on the day on which he overcame the Benei Betheira (Tosef., Sanh. vii., toward the end; Sifra, Introduction, end; Ab. R. N. xxxvii.). On these seven rules rest the thirteen of R. Ishmael; they were epoch-making for the systematic development of the ancient Scripture exposition.

At least two other notable Hillels are known. Some scholars have suggested that some sayings attributed to "Hillel" in some texts may be from other Hillels.[11]

During the Passover Seder (the annual commemoration of the Exodus from Egypt), one re-enacts ancient customs in the Haggadah. In the section of Korech, or 'sandwich', participants are instructed to place bitter herbs between two pieces of matzo and eat them after saying in Hebrew: This is a remembrance of Hillel in Temple times—This is what Hillel did when the Temple existed: He enwrapped the Paschal lamb, the matzo and the bitter herbs to eat them as one, in fulfillment of the verse, "with matzot and maror they shall eat it."(Numbers 9:11) This sandwich apparently refers to traditional soft matzot rather than modern crisp matzot, and so would have borne a striking resemblance to a modern shawarma.[12] In modern times, when there is no paschal lamb, Ashkenazi practice is to emulate this by making a matzo, maror, (horseradish or lettuce) sandwich. Philo has called this sandwich a "moral migration from wickedness to virtue. Repentant sinners at first brood bitterly (maror) over their past misdeeds. Then matzah, the healing food, brings them to humility and contentment."[12]