From Infogalactic: the planetary knowledge core
Jump to: navigation, search
For other uses, see Hillman (disambiguation). 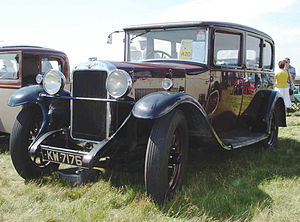 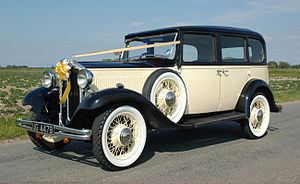 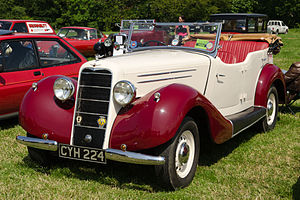 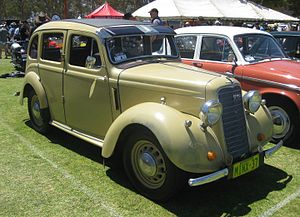 Hillman is a British automobile marque created by the Hillman Motor Car Company, founded in 1907. The company was based in Ryton-on-Dunsmore, near Coventry, England. Before 1907 the company had built bicycles. Although the Hillman company was acquired by Humber in 1929, Hillman was used as the primary marque of the Rootes Group from 1931, following its acquisition of Humber, until 1967, when Chrysler in turn took over Rootes. The marque continued to be used under Chrysler until 1976.

In 1857 Josiah Turner and James Starley formed the Coventry Sewing Machine Company,[1] and recruited skilled engineers from the London area to join them, one of whom was William Hillman. In 1869 the firm changed its name to the Coventry Machinists Company, and like many other manufacturers in the area embarked on producing velocipedes. In 1870 Hillman and Starley patented a new bicycle called the "Ariel" and by 1885 Hillman was a partner of the bicycle manufacturer Hillman Herbert and Cooper, producing a bicycle called the Kangaroo. Hillman's new company soon established itself, and before the turn of the 20th century, Hillman was a millionaire. With wealth came the means to fulfil Hillman's next ambition, to become a car producer. Hillman had moved into Abingdon House in Stoke Aldermoor near Coventry and decided that a sensible plan would be to set up a car factory in its grounds. in 1907 Hillman-Coatalen, was founded by William Hillman with the Breton Louis Coatalen as designer and chief engineer. They launched the 24HP Hillman-Coatalen (named after its designer), which was entered into that year's Tourist Trophy. The car was put out of the race by a crash, but it had made a splash. Coatalen left in 1909 to join Sunbeam and the company was re-registered as the Hillman Motor Car Company in 1910.

The first cars were large, featuring a 9.76-litre 6-cylinder engine or a 6.4-litre four. A smaller car, the 9 hp of 1913 with a 1357 cc side-valve four-cylinder engine, was the first to sell in significant numbers and was re-introduced after the First World War as the 11 hp, having grown to 1600 cc. The big seller was the 14 hp introduced in 1925, and the only model made until 1928. Following the fashion of the time a Straight Eight of 2.6 litres and Hillman's first use of overhead valves came in 1928 but soon gained a reputation for big-end problems.

In 1928 Hillman fell under the control of the Rootes brothers and then merged with Humber. The Rootes brothers obtained further backing from Prudential Assurance during 1931 and brought their holding up to 60 per cent of Humber. Then, in stages, Hillman was switched to manufacturing small cars and became the best known brand within the Rootes empire alongside Humber, Sunbeam and, in the Rootes Group's final decade, Singer.

After the war the Minx was reintroduced with the same 1185 cc engine. It went through a series of models given Phase numbers and the Phase VIII of 1955 saw the arrival of an overhead-valve engine 1390cc, the Mk 8. The later 1956 Two Tone version of this model was called the "Gay Look" or Mk 8A model, showing how the meaning of words can change, and led to the advertising slogan "As Gay as a Mardi Gras". A smaller car, the Husky with van like body and using the old side-valve engine, was also new for 1954. The floor pan of this model was later to form the basis for the Sunbeam Alpine, Sunbeam also being part of the Rootes empire. A complete departure in 1963 was the Hillman Imp using a Coventry Climax all alloy, 875 cc rear engine and built in a brand new factory in Linwood, Scotland. The location was chosen under government influence to bring employment to a depressed area. A fastback version, the Californian, and an estate re-using the Husky name were also made. A new car called the Hunter was introduced in 1966 with, in 1967, a smaller-engined standard version using the old Minx name. These are frequently given their factory code of "Arrow", but this name was never officially used in marketing.

Chrysler had assumed complete control of Rootes by 1967, and the first new Hillman model whose development was financed by the American giant was the Avenger of 1970. 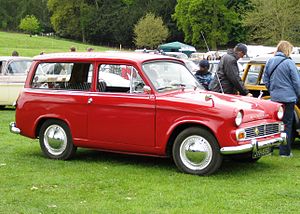 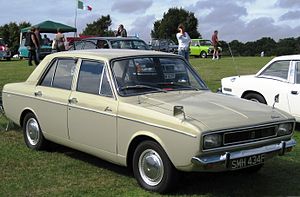 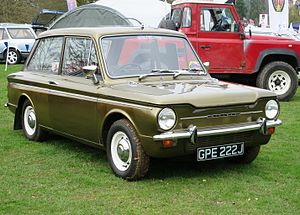 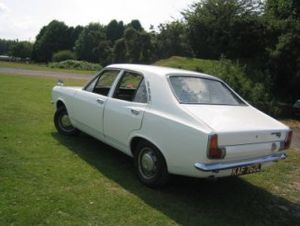 The Avenger and Hunter ranges were rebadged as Chryslers until 1979 when Chrysler sold its European division to Peugeot. At this point, Hunter production was shelved and the Avenger was rebadged as a Talbot until it was finally withdrawn from sale at the end of 1981.

Hillman's Ryton factory, which had assembled various Peugeot models for the European market, closed in 2007.[2] The French company still owns the rights to the Hillman name.