From Infogalactic: the planetary knowledge core
Jump to: navigation, search
This article is about the roof shapes involving a hip. For other uses, see Rafter.

A ranch-style house in Chicago with a hipped roof 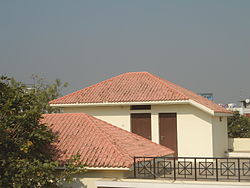 A hip roof, hip-roof[1] or hipped roof, is a type of roof where all sides slope downwards to the walls, usually with a fairly gentle slope (although a tented roof by definition is a hipped roof with steeply pitched slopes rising to a peak). Thus a hipped roof house has no gables or other vertical sides to the roof.

A square hip roof is shaped like a pyramid. Hip roofs on houses could have two triangular sides and two trapezoidal ones. A hip roof on a rectangular plan has four faces. They are almost always at the same pitch or slope, which makes them symmetrical about the centerlines. Hip roofs often have a consistent level fascia, meaning that a gutter can be fitted all around. Hip roofs often have dormer slanted sides.

A hip roof on a rectangular plan

A square hip roof (also known as a "pyramid roof")
File:Rf-iso1.gif
A hip roof on a varied plan, "h" denotes a hip, "v" denotes a valley

Hip roofs are more difficult to construct than a gabled roof, requiring more complex systems of rafters or trusses. Although the roof itself is harder to construct, the walls that carry the roof are easier to build, being all one level. Hip roofs can be constructed on a wide variety of plan shapes. Each ridge is central over the rectangle of the building below it. The triangular faces of the roof are called the hip ends, and they are bounded by the hips themselves. The "hips" and hip rafters sit on an external corner of the building and rise to the ridge. Where the building has an internal corner, a valley makes the join between the sloping surfaces. They have the advantage of giving a compact, solid appearance to a structure. The roof pitch (slope) may vary.

In modern domestic architecture, hip roofs are commonly seen in bungalows and cottages, and have been integral to styles such as the American Foursquare. However, the hip roof has been used in many different styles of architecture and in a wide array of structures.

A hip roof is self-bracing. It does not need the same amount of diagonal bracing (wind bracing) that a gable roof requires.

Hip roofs are much better suited for hurricane regions than gable roofs. Hip roofs have no large, flat, or slab-sided ends to catch wind and are inherently much more stable than gable roofs. However, for a hurricane region, the roof also has to be steep-sloped; at least 35 degrees from horizontal or steeper in slope is preferred. When wind flows over a shallow sloped hip roof, the roof can behave like an airplane wing. Lift is then created on the leeward side. The flatter the roof, the more likely this will happen. A steeper pitched hip roof tends to cause the wind to stall as it goes over the roof, breaking up the effect. If the roof slopes are less than 35 degrees from horizontal, the roof will be subject to uplift. Greater than 35 degrees, and not only does wind blowing over it encounter a stalling effect, but the roof is actually held down on the wall plate by the wind pressure.

A possible disadvantage of a hip roof, compared with a gable roof on the same plan, is that there is less room inside the roof space; access is more difficult for maintenance; hip roofs are harder to ventilate; and there is not a gable with a window for natural light. [2][3] and have a lower profile.

A mansard roof is a variation on a hip roof, with two different roof angles, the lower one much steeper than the upper.

A tented roof is a type of polygonal hipped roof with steeply pitched slopes rising to a peak or intersection.

Another variation is the gablet (UK terminology) or Dutch gable roof (U.S. and Australasian terminology), which has a hip with a small gable (the gablet) above it. This type simplifies the construction of the roof; no girder trusses are required, but it still has level walls and consistent eaves.

A half-hip, clipped-gable or jerkin head roof has a gable, but the upper point of the gable is replaced by a small hip, squaring off the top of the gable. The lower edge of the half-hip may have a gutter which leads back on to the remainder of the roof on one or both sides. Both the gablet roof and the half-hipped roof are intermediate between the gabled and fully hipped types: the gablet roof has a gable above a hip, while a half-hipped roof has a hip above a gable.

Half-hipped roofs are very common in Denmark, Germany and especially in Austria and Slovenia. They are also typical of traditional timber frame buildings in the Wealden area of South East England.

Half hip roofs are sometimes referred to as "Dutch hip", but this term is easily confused with "Dutch gable".

A hip roof on a square structure typically found topping gazebos and other pavilion structures, also known as a pyramid roof.

A pointed roof seen on a spire or a tower, oriented so that it has four gable ends. See Church of St Mary the Blessed Virgin, Sompting, Speyer Cathedral, or Limburg Cathedral.