From Infogalactic: the planetary knowledge core
Jump to: navigation, search
For other uses, see Hiroshima (disambiguation).

listen (help·info)) is the capital of Hiroshima Prefecture, and the largest city in the Chūgoku region of western Honshu, the largest island of Japan. The city's name, 広島, means "Wide Island" in Japanese. Hiroshima gained city status on April 1, 1889. On April 1, 1980, Hiroshima became a designated city. As of 2006, the city had an estimated population of 1,154,391. Kazumi Matsui has been the city's mayor since April 2011.

Hiroshima is best known as the first city in history to be targeted by a nuclear weapon when the United States Army Air Forces (USAAF) dropped an atomic bomb on the city at 8:15 a.m. on August 6, 1945, near the end of World War II.[1] 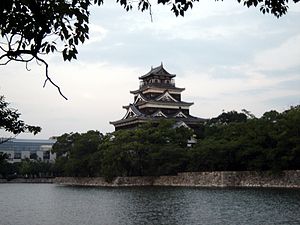 Hiroshima was established on the river delta coastline of the Seto Inland Sea in 1589 by the powerful warlord Mōri Terumoto, who made it his capital after leaving Kōriyama Castle in Aki Province.[2][3] Hiroshima Castle was quickly built, and in 1593 Terumoto moved in. Terumoto was on the losing side at the Battle of Sekigahara. The winner of the battle, Tokugawa Ieyasu, deprived Mori Terumoto of most of his fiefs including Hiroshima and gave Aki Province to Masanori Fukushima, a daimyo who had supported Tokugawa.[4] 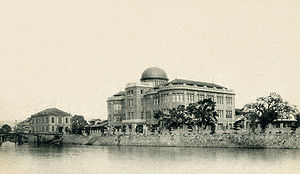 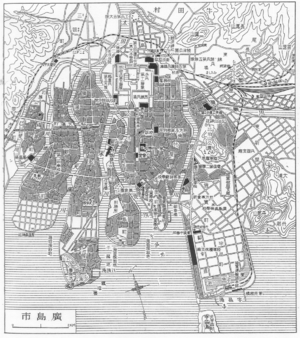 Map of Hiroshima City in the 1930s (Japanese edition)

After the han was abolished in 1871, the city became the capital of Hiroshima Prefecture. Hiroshima became a major urban center during the imperial period, as the Japanese economy shifted from primarily rural to urban industries. During the 1870s, one of the seven government-sponsored English language schools was established in Hiroshima.[5] Ujina Harbor was constructed through the efforts of Hiroshima Governor Sadaaki Senda in the 1880s, allowing Hiroshima to become an important port city.

The Sanyo Railway was extended to Hiroshima in 1894, and a rail line from the main station to the harbor was constructed for military transportation during the First Sino-Japanese War.[6] During that war, the Japanese government moved temporarily to Hiroshima, and Emperor Meiji maintained his headquarters at Hiroshima Castle from September 15, 1894 to April 27, 1895.[6] The significance of Hiroshima for the Japanese government can be discerned from the fact that the first round of talks between Chinese and Japanese representatives to end the Sino-Japanese War was held in Hiroshima, from February 1 to February 4, 1895.[7] New industrial plants, including cotton mills, were established in Hiroshima in the late 19th century.[8] Further industrialization in Hiroshima was stimulated during the Russo-Japanese War in 1904, which required development and production of military supplies. The Hiroshima Prefectural Commercial Exhibition Hall was constructed in 1915 as a center for trade and exhibition of new products. Later, its name was changed to Hiroshima Prefectural Product Exhibition Hall, and again to Hiroshima Prefectural Industrial Promotion Hall.[9]

During World War I, Hiroshima became a focal point of military activity, as the Japanese government entered the war on the Allied side. About 500 German prisoners of war were held in Ninoshima Island in Hiroshima Bay.[10] The growth of Hiroshima as a city continued after the First World War, as the city now attracted the attention of the Catholic Church, and on May 4, 1923, an Apostolic Vicar was appointed for that city.[11]

During World War II, the 2nd General Army and Chugoku Regional Army were headquartered in Hiroshima, and the Army Marine Headquarters was located at Ujina port. The city also had large depots of military supplies, and was a key center for shipping.[12]

The bombing of Tokyo and other cities in Japan during World War II caused widespread destruction and hundreds of thousands of deaths.[13] For example, Toyama, an urban area of 128,000 people, was nearly destroyed, and incendiary attacks on Tokyo claimed the lives of 100,000 people. There were no such air raids on Hiroshima. However, a real threat existed and was recognized. In order to protect against potential firebombings in Hiroshima, school children aged 11–14 years were mobilized to demolish houses and create firebreaks.[14]

The public release of film footage of the city following the attack, and some of the Atomic Bomb Casualty Commission research, about the human effects of the attack, was restricted during the occupation of Japan, and much of this information was censored until the signing of the San Francisco Peace Treaty in 1951, restoring control to the Japanese.[17]

As Ian Buruma observes, “News of the terrible consequences of the atom bomb attacks on Japan was deliberately withheld from the Japanese public by US military censors during the Allied occupation—even as they sought to teach the natives the virtues of a free press. Casualty statistics were suppressed. Film shot by Japanese cameramen in Hiroshima and Nagasaki after the bombings was confiscated. "Hiroshima", the famous account written by John Hersey for The New Yorker, had a huge impact in the US, but was banned in Japan. As [John] Dower says: ‘In the localities themselves, suffering was compounded not merely by the unprecedented nature of the catastrophe…but also by the fact that public struggle with this traumatic experience was not permitted.’” The US occupation authorities maintained a monopoly on scientific and medical information about the effects of the atomic bomb through the work of the Atomic Bomb Casualty Commission, which treated the data gathered in studies of hibakusha as privileged information rather than making the results available for the treatment of victims or providing financial or medical support to aid victims. The US also stood by official denial of the ravages associated with radiation. Finally, not only was the press tightly censored on atomic issues, but literature and the arts were also subject to rigorous control prior.[18]

The book Hiroshima written by Pulitzer Prize winner John Hersey, was originally featured in article form and published in the popular magazine The New Yorker,[19] on 31 August 1946. It is reported to have reached Tokyo, in English, at least by January 1947 and the translated version was released in Japan in 1949.[20] Despite the fact that the article was planned to be published over four issues, "Hiroshima" made up the entire contents of one issue of the magazine.[21][22] Hiroshima narrates the stories of six bomb survivors immediately prior to and for months after the dropping of the Little Boy bomb.[19][23]

The oleander is the official flower of the city of Hiroshima because it was the first to bloom again after the explosion of the atomic bomb in 1945.[24] 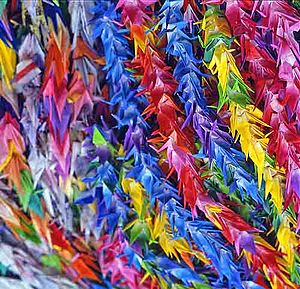 On September 17, 1945, Hiroshima was struck by the Makurazaki Typhoon (Typhoon Ida). Hiroshima prefecture suffered more than 3,000 deaths and injuries, about half the national total.[25] More than half the bridges in the city were destroyed, along with heavy damage to roads and railroads, further devastating the city.[26] 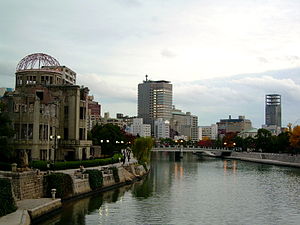 The peace park also contains a Peace Pagoda, built in 1966 by Nipponzan-Myōhōji. Uniquely, the pagoda is made of steel, rather than the usual stone.[citation needed]

Hiroshima was proclaimed a City of Peace by the Japanese parliament in 1949, at the initiative of its mayor, Shinzo Hamai (1905–1968). As a result, the city of Hiroshima received more international attention as a desirable location for holding international conferences on peace as well as social issues. As part of that effort, the Hiroshima Interpreters' and Guide's Association (HIGA) was established in 1992 in order to facilitate interpretation for conferences, and the Hiroshima Peace Institute was established in 1998 within the Hiroshima University. The city government continues to advocate the abolition of all nuclear weapons and the Mayor of Hiroshima is the president of Mayors for Peace, an international mayoral organization mobilizing cities and citizens worldwide to abolish and eliminate nuclear weapons by the year 2020.[29][30]

Hiroshima is situated on the Ōta River delta, on Hiroshima Bay, facing the Seto Inland Sea on its south side. The river's six channels divide Hiroshima into several islets.

Hiroshima has a humid subtropical climate characterized by mild winters and hot humid summers. Like much of the rest of Japan, Hiroshima experiences a seasonal temperature lag in summer, with August rather than July being the warmest month of the year. Precipitation occurs year-round, although winter is the driest season. Rainfall peaks in June and July, with August experiencing sunnier and drier conditions. 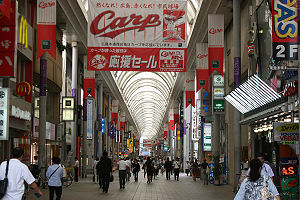 Hiroshima has a train station in Minami-ku, where the Sanyo Shinkansen, the Sanyo Main Line, the Kabe Line, the Kure Line, and the Geibi Line, all of the West Japan Railway Company, have a stop. (In fact, the station is a terminal station for many of those lines.) 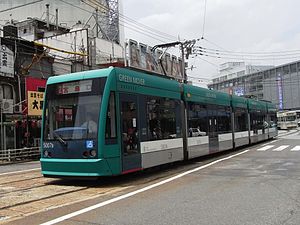 Hiroshima is notable, in Japan, for its light rail system, nicknamed Hiroden, and the "Moving Streetcar Museum." Streetcar service started in 1912,[36] was interrupted by the atomic bomb, and was restored as soon as was practical. (Service between Koi/Nishi Hiroshima and Tenma-cho was started up three days after the bombing.[37])

Streetcars and light rail vehicles are still rolling down Hiroshima's streets, including nuked streetcars 651 and 652, which are among the older streetcars in the system. When Kyoto and Fukuoka discontinued their trolley systems, Hiroshima bought them up at discounted prices, and, by 2011, the city had 298 streetcars, more than any other city in Japan.[37] 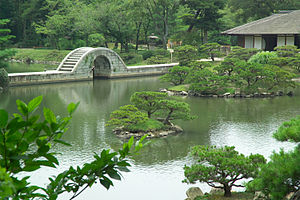 Hiroshima's rebuilt castle (nicknamed Rijō, meaning Koi Castle) houses a museum of life in the Edo period. Hiroshima Gokoku Shrine is within the walls of the castle. Other attractions in Hiroshima include Shukkei-en, Fudōin, Mitaki-dera, and Hijiyama Park. 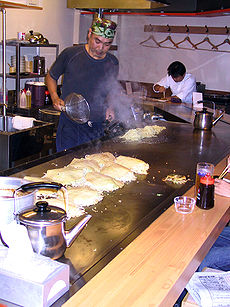 A man prepares okonomiyaki in a restaurant in Hiroshima

Hiroshima is known for okonomiyaki, a savory (umami) pancake cooked on a hot-plate, usually in front of the customer. It is cooked with various ingredients, which are layered rather than mixed together as done with the Osaka version of okonomiyaki. The layers are typically egg, cabbage, bean sprouts (moyashi), sliced pork/bacon with optional items (mayonnaise, fried squid, octopus, cheese, mochi, kimchi, etc.), and noodles (soba, udon) topped with another layer of egg and a generous dollop of okonomiyaki sauce (Carp and Otafuku are two popular brands). The amount of cabbage used is usually 3 to 4 times the amount used in the Osaka style, therefore arguably a healthier version. It starts out piled very high and is generally pushed down as the cabbage cooks. The order of the layers may vary slightly depending on the chef's style and preference, and ingredients will vary depending on the preference of the customer. 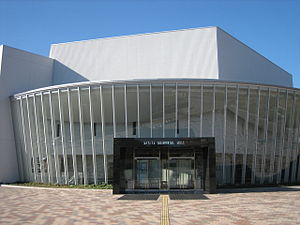 Hiroshima has several professional sports clubs. The city's main football club are Sanfrecce Hiroshima, who play at the Hiroshima Big Arch. As Toyo Kogyo Soccer Club, they won the Japan Soccer League five times between 1965 and 1970 and the Emperor's Cup in 1965, 1967 and 1969. After adopting their current name in 1992, the club won the J. League in 2012 and 2013. The city's main women's football club is Angeviolet Hiroshima. Defunct clubs include Rijo Shukyu, who won the Emperor's Cup in 1924 and 1925, and Ẽfini Hiroshima.

Hiroshima Toyo Carp are the city's major baseball club, and play at the Mazda Stadium. Members of the Central League, the club won the Japan Series in 1979, 1980 and 1984. Other sports clubs include Hiroshima Dragonflies (basketball), Hiroshima Maple Reds (handball) and JT Thunders (volleyball).

The Woodone Open Hiroshima was part of the Japan Golf Tour between 1973 and 2007. The city also hosted the 1994 Asian Games, using the Big Arch stadium, which is now used for the annual Mikio Oda Memorial International Amateur Athletic Game.

Within Japan, Hiroshima has a similar relationship with Nagasaki.