His Majesty's Declaration of Abdication Act 1936 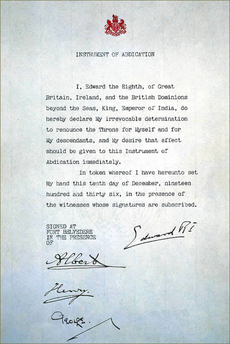 His Majesty's Declaration of Abdication Act 1936 (1 Edw. 8 & 1 Geo. 6 c. 3) was the Act of the Parliament of the United Kingdom that recognised and ratified the abdication of King Edward VIII and passed succession to his brother Prince Albert, Duke of York (who subsequently became King George VI). The act also excluded any possible future descendants of Edward from the line of succession. Edward VIII abdicated in order to marry his lover, Wallis Simpson, after facing opposition from the governments of the United Kingdom and the Dominions.

Although Edward VIII had signed a declaration of abdication the previous day—10 December 1936—he remained king until giving Royal Assent to His Majesty's Declaration of Abdication Act, which he did on 11 December.[1]

The act was passed through the British Houses of Parliament in one day, with no amendments. As the Statute of Westminster 1931 stipulated that the line of succession must remain the same throughout the Crown's realms, the governments of some of the British Dominions—Canada, Australia, the Union of South Africa, and New Zealand—requested and gave their permission for the act to become part of the law of their respective realms.

The Canadian parliament later passed the Succession to the Throne Act 1937 to ratify changes to the rules of succession in Canada and ensure consistency with the changes in the rules then in place in the United Kingdom. South Africa passed His Majesty King Edward the Eighth's Abdication Act, 1937, which declared the abdication to have taken effect on 10 December 1936. Australia and New Zealand did not adopt the Statute of Westminster 1931 until the 1940s and did not pass their own legislation. In the Irish Free State, which was independent from the United Kingdom since 1922 and the monarch still had some diplomatic functions, parliament passed the Executive Authority (External Relations) Act 1936, recognising the Duke of York as king from 12 December 1936.

The act was necessary for two main reasons.

First, there was no provision in British law for a sovereign to abdicate. To abdicate the king had first formally to sign an instrument declaring his irrevocable intent to abdicate. This was also signed by witnesses. Then Parliament had to pass a bill to ratify this instrument and declare that he was no longer king. Finally the king had to give royal assent to the legislation, which only then became a law. (This process had to be repeated in the parliaments of the Dominions which had enacted the Statute of Westminster 1931: Canada and South Africa.)

Second, the act ensured that any descendants of Edward VIII would have no claim to the throne, and that the Royal Marriages Act 1772 would not apply to them.

Upon the royal assent being communicated to Parliament on the king's behalf, the act came into effect and Edward VIII ceased to be king. The throne immediately passed to his brother, Prince Albert, who was proclaimed King George VI the next day at St. James's Palace, London.