Historic England (officially the Historic Buildings and Monuments Commission for England) is an executive non-departmental public body of the British Government sponsored by the Department for Culture, Media and Sport (DCMS). It is tasked with protecting the historical environment of England by preserving and listing historic buildings, ancient monuments and advising central and local government.

The body was officially created by the National Heritage Act 1983 and from foundation until April 2015 was completed under the name of English Heritage.[2] Following the changes to English Heritage's structure that moved the protection of the National Heritage Collection into the voluntary sector the body that remained was rebranded as Historic England.[3] Historic England has a similar remit to and complements the work of Natural England which aims to protect the natural environment.

The body also inherits the Historic England Archive from the old English Heritage, and projects linked to the archive such as Britain from Above, which saw the archive work with RCAHMW and RCAHMS to digitise, catalogue and put online 96,000 of the oldest Aerofilms images. The archive also holds various nationally important collections and the results of older projects such as the work of the National Buildings Record, later absorbed by the Royal Commission on the Historical Monuments of England and the Images of England project which set out to create a freely accessible online database of the 370,000 listed properties in England at a snapshot in time at the turn of the millennium. 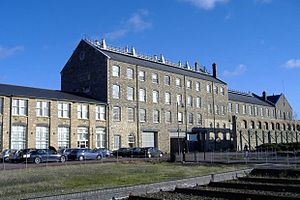 Historic England's Swindon Office and home to their Archives.

Historic England inherits English Heritage's position as the UK government's statutory adviser and a statutory consultee on all aspects of the historic environment and its heritage assets.[4] This includes archaeology on land and under water, historic buildings sites and areas, designated landscapes and the historic elements of the wider landscape.[5] It monitors and reports on the state of England's heritage and publishes the annual the Heritage at Risk survey which is one of the UK Government's Official statistics. It is tasked to secure the preservation and enhancement of the man-made heritage of England for the benefit of future generations.[5]

It is not responsible for approving alterations to listed buildings. The management of listed buildings is the responsibility of local planning authorities and the Department for Communities and Local Government.[10]

It also owns the National Heritage Collection of nationally important historic sites, currently in public care. However they do not run these sites as this function is instead carried out by the English Heritage Trust under license until 2023.[11]