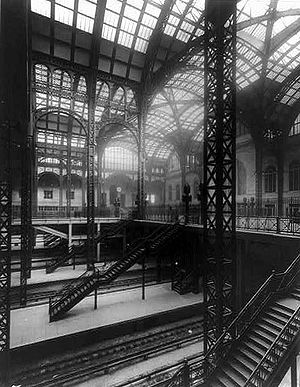 In England, antiquarian interests were a familiar gentleman's pursuit since the mid 17th century, developing in tandem with the rise in scientific curiosity. Fellows of the Royal Society were often also Fellows of the Society of Antiquaries[citation needed].

Many historic sites were damaged as the railways began to spread across the UK; including Trinity Hospital and its church in Edinburgh, Furness Abbey, Berwick and Northampton Castle, and the ancient walls of York, Chester and Newcastle. In 1833 the Berkhamsted Castle became the first historic site in England to be officially protected by statute under the London and Birmingham Railway Acts of 1833-37, though the new railway line in 1834 did demolish the castle's gatehouse and outer earthworks to the south.[2] By the mid 19th century, Britain's unprotected cultural heritage was being slowly destroyed. Even well-meaning archaeologists like William Greenwell excavated sites with virtually no attempt at their preservation. 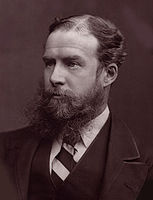 John Lubbock, MP was a moving force behind the implementation of the Ancient Monuments Protection Act 1882.

Stonehenge came under increasing threat by the 1870s. Tourists were chipping off parts of the stones or carving their initials into the rock. The private owners of the monument decided to sell the land to the London and South-Western Railway as the monument was "not the slightest use to anyone now"[citation needed]. John Lubbock, an MP and botanist emerged as the champion of the country's national heritage. In 1872 he personally bought private land that housed ancient monuments in Avebury, Silbury Hill and elsewhere, from the owners who were threatening to have them cleared away to make room for housing. Soon, he began campaigning in Parliament for legislation to protect monuments from destruction. This finally led to the legislative milestone under the Liberal government of William Gladstone of the Ancient Monuments Protection Act 1882. The first government appointed inspector for this job was the archaeologist Augustus Pitt-Rivers. This legislation was regarded by conservative political elements as a grave assault on the individual rights of property of the owner, and consequently, the inspector only had the power to identify endangered landmarks and offer to purchase them from the owner with his consent. The Act only covered ancient monuments and explicitly did not cover historic buildings or structures. In 1877 the Society for the Protection of Ancient Buildings was founded by the Arts and Crafts designer William Morris to prevent the destruction of historic buildings, followed by the National Trust in 1895 that bought estates from their owners for preservation.[3] 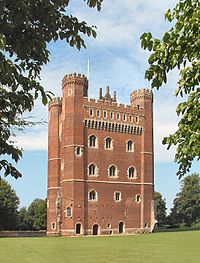 Tattershall Castle, Lincolnshire, a medieval manor house had been put up for sale in 1910 with its greatest treasures, the huge medieval fireplaces, still intact. However, when an American bought the house they were ripped out and packaged up for shipping. The former viceroy of India, George Curzon, 1st Marquess Curzon of Kedleston, was outraged at this cultural destruction and stepped in to buy back the castle and reinstall the fireplaces. After a nationwide hunt for them they were finally found in London and returned.[4] He restored the castle[5] and left it to the National Trust on his death in 1925. His experience at Tattershall influenced Lord Curzon to push for tougher heritage protection laws in Britain, which saw passage as the Ancient Monuments Consolidation and Amendment Act 1913.

The new structure involved the creation of the Ancient Monuments Board to oversee the protection of such monuments. Powers were given for the Board, with Parliamentary approval, to issue preservation orders to protect monuments, and extended the public right of access to these. The term "monument" was extended to include the lands around it, allowing the protection of the wider landscape.[6]

The National Trust was founded in 1894 by Octavia Hill, Sir Robert Hunter and Hardwicke Canon Rawnsley as the first organisation of its type in the world. Its formal purpose is:

In the early days, the Trust was concerned primarily with protecting open spaces and a variety of threatened buildings; its first property was Alfriston Clergy House and its first nature reserve was Wicken Fen. Its first archaeological monument was White Barrow. The focus on country houses and gardens, which now comprise the majority of its most visited properties, came about in the mid 20th century, when it was realised that the private owners of many of these properties were no longer able to afford to maintain them.

The Town and Country Planning Act 1944, and the Town and Country Planning Act 1990, took steps toward historic preservation on an unprecedented scale.[citation needed] Concern about the demolition of historic buildings arose in institutions such as the pressure group the Society for the Preservation of Historic Buildings, which appealed against demolition and neglect on a case by case basis.[7] 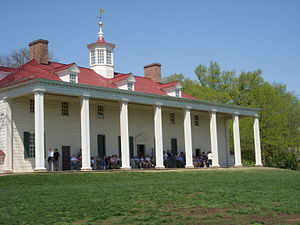 In the United States one of the first historic preservation efforts was the Washington's Headquarters State Historic Site, in Newburgh, New York. This property has the distinction of being the first-ever property designated and operated as a historic site by a U.S. state, having been so since 1850.

Charles E. Peterson was an influential figure in the mid-20th century establishing the Historic American Buildings Survey (HABS), advising on the establishment of Independence National Historical Park, helping with the first graduate degree program in historic preservation in the United States at Columbia University, and author.

The architectural firm of Simons & Lapham (Albert Simons and Samuel Lapham) was an influential supporter of the nation's first historic preservation ordinance in Charleston, South Carolina in 1930, affording that city a regulatory means by which to prevent the destruction of its historic building stock. In 1925, efforts to preserve the historic buildings of the French Quarter in New Orleans led to the creation of the Vieux Carré Commission and later, to the adoption of a historic preservation ordinance.[11][12]

The preservation of this historic building in Washington, D.C. resulted in an award for Excellence in Historic Preservation by the local government.[13]

The US National Trust for Historic Preservation, another privately funded non-profit organization, began in 1949 with a handful of structures and has developed goals that provide "leadership, education, advocacy, and resources to save America's diverse historic places and revitalize our communities" according to the Trust's mission statement. In 1951 the Trust assumed responsibility for its first museum property, Woodlawn Plantation in northern Virginia. Twenty-eight sites in all have subsequently become part of the National Trust, representing the cultural diversity of American history. In New York City, the destruction of Pennsylvania Station in 1964 shocked many nationwide into supporting preservation. On an international level, the New York-based World Monuments Fund was founded in 1965 to preserve historic sites all over the world.

In Canada, the phrase "heritage preservation" is sometimes seen as a specific approach to the treatment of historic places and sites, rather than a general concept of conservation. "Conservation" is taken as the more general term, referring to all actions or processes that are aimed at safeguarding the character-defining elements of a cultural resource so as to retain its heritage value and extend its physical life.

Historic objects in Canada may be granted special designation by any of the three levels of government: the central government, the provincial governments, or a municipal government. The Heritage Canada Foundation acts as Canada's lead advocacy organisation for heritage buildings and landscapes. 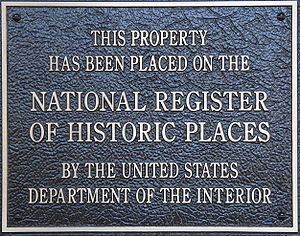 A historic district in the United States is a group of buildings, properties, or sites that have been designated by one of several entities on different levels as historically or architecturally significant. Buildings, structures, objects and sites within a historic district are normally divided into two categories, contributing and non-contributing. Districts greatly vary in size, some having hundreds of structures while others have just a few.

The U.S. federal government designates historic districts through the U.S. Department of Interior, under the auspices of the National Park Service. Federally designated historic districts are listed on the National Register of Historic Places.[18] Historic districts allows rural areas to preserve their characters through historic preservation programs. These include "Main Street" programs that can be used to redevelop rural downtowns. Using historic preservation programs as an economic development tool for local governments in rural areas has enabled some of those areas to take advantage of their history and develop a tourism market that in turn provides funds for maintaining an economic stability that these areas would not have seen otherwise.[19][20]

A similar concept exists in the United Kingdom: a Conservation area is designated in accordance with the Planning (Listed Buildings and Conservation Areas) Act 1990 in order to protect a zone in which there are buildings of architectural or cultural heritage interest.

In 1835, the English poet William Wordsworth described the Lake District as a[21]

It was, however, the United States that led the world in the creation of National Parks, areas of unspoiled natural wilderness, where the intrusion of civilization are intentionally minimal.[citation needed]

The department of the interior designated several areas of Morristown, New Jersey as the first historic park in the United States national park system. It became designated as the Morristown National Historical Park.[22] The community had permanent settlements that date to 1715, is termed the military capital of the American Revolution, and contains many designations of sites and locations. The park includes three major sites in Morristown.

In the United Kingdom, James Bryce the ambassador to the US praised the system of National Parks and campaigned to have them introduced in Great Britain. Little came of it until mounting public pressure during the early 20th century from the Ramblers' Association and other groups led to the National Parks and Access to the Countryside Act 1949.

Landscapes and sites of outstanding universal value can be designated as World Heritage Sites. A requirement of such designation is that the designating nation has appropriate legislation in place to preserve them.

Architectural conservator
Focus specifically on the physical conservation of building materials.
Architectural historian/historian
Primarily researches and writes statements expressing the historical significance of sites.
Historic preservation planner
Most are employed by local, county, state or federal government planning agencies to administer tax abatement programs, ensure compliance with local ordinances and state and Federal legislation, and conduct design reviews to ensure that proposed projects will not harm historic and archaeological resources. At the state level, they are known as a State Historic Preservation Officer while at other levels of government they may be known as a Federal or Tribal Historic Preservation Officer. Some may also serve as consultants to local governments, conducting Section 106 reviews in accordance with the National Historic Preservation Act of 1966.
Preservation architect
Design and develop architectural conservation plans and work specifications in consultation with Engineers, Historians and Planners, ensuring compliance with local design guidelines to protect sensitive historic building fabric. Most are employed by private architecture firms though some find work with government agencies.
Preservation craftsperson/traditional trades practitioner
Employs knowledge of traditional building techniques and contemporary conservation technologies to complete the conservation, repair or restoration of historic buildings.
Preservation engineer
Work with Architects to devise conservation solutions of a structural or material -specific nature. Most are employed by private architecture and/or engineering firms.
Public historian/resource interpreters
Most are employed by government agencies and private foundations to interpret the significance of historic resources for the general public.
Historic site administrator
Non-profit sector careers
Engage in a variety of activities concerned with historic preservation advocacy, easements, and private foundations at the local, regional, statewide, or national levels.