The 41 județe (English: counties) and the municipality of Bucharest comprise the official administrative divisions of Romania. They also represent the European Union' s NUTS-3 geocode statistical subdivision scheme of Romania.

The earliest organization into județe of the Principalities of Wallachia, respectively ținuturi of Moldavia, dates back at least to the late 14th century.[1] Each județ, respectively ținut, was ruled by a jude, respectively pârcălab, an officially appointed person who had administrative and judicial functions in a manner inspired from the organization of the late Byzantine Empire. Transylvania, when it was part of the historic Kingdom of Hungary (in the Middle Ages), an independent Principality or a Habsburg domain (in the modern era until World War I) was divided into royal counties (Latin: comitatus), headed by comes (royal counts) with administrative and judicial functions. The term județ started to be used in Romanian as a general term for all administrative divisions since the mid 19th century.

When modern Romania was formed in 1859 through the union of Wallachia and rump Moldavia, and then extended in 1918 through the union of Transylvania, as well as Bukovina and Bessarabia (parts of Moldavia temporarily acquired by the Habsburgs, 1775–1918, respectively the Russian Tsars, 1812–1917), the administrative division was modernized using the French departments system as model. With the exception of the Communist period, this system remained in place. A prefect (from the Latin praefectus) is appointed for each județ. The prefect is the representative of the government in the county and the head of the local administration in the areas not devolved to local authorities. Until 1950, each județ was divided into a number of plăși (singular plasă), each administered by a pretor (from the Latin praetor), appointed by the prefect. Currently, Romania has no NUTS-4 units, the counties being composed directly of cities (with or without municipality status) and communes.

As in all modern democracies, the political power in Romania is divided into three independent branches: legislative, executive, and judicial. The prefect and his administration have only executive prerogatives. However, the territorial districts of the Romanian judicial system overlap with county borders, thus avoiding further complication. At the same time with local elections (of mayors and councilors for the cities and communes), a County Council (Consiliu judeţean) is directly elected for each county, and, since 2008, the President of the County Council is also elected by direct vote. As of now, the legislative powers of county councils are quite reduced, but there are plans for more decentralization. (These plans, however, call for introduction of Regional Councils for the 8 development regions of the NUTS-2 level.)

After independence, the Romanian Old Kingdom was divided into 33 counties, with the following seats:

After the Second Balkan War, Romania was awarded the southern part of Dobrudja, between Danube, Beli Lom River, Kamchiya River and Black Sea, which was divided into two counties:

File:Judete 1919-25.png
Counties of the Kingdom of Romania in 1918-1925
File:Propunere judete si regiuni 1920.png
The original proposal for the administrative unification of interwar Romania (Simion Mehedinți Commission, 1920) aimed to create 48 counties and 9 regions[2] 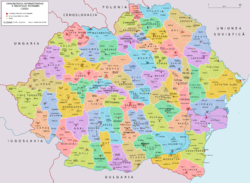 Between 1918 and 1925 the specifics of the administrative organization in the new territories were kept. It consisted of about 76 counties or parts of counties.[3] In 1923 Romania adopted a new Constitution, and it unified the traditional administrative systems of Transylvania, Bukovina and Bessarabia with that of the Romanian Old Kingdom. County borders were kept largely intact, with only a couple minor adjustments. As a result of the 1925 administrative unification law, the territory was divided into 71 counties, 489 districts (plăși) and 8,879 communes.

Some of the 71 județe still exist today, a number were lost during World War II, and some became defunct. The latter ones are:

In 1938, King Carol II promulgated a new Constitution, and subsequently he had the administrative division of the Romanian territory changed. 10 ținuturi (approximate translation: "lands") were created (by merging the counties) to be ruled by rezidenți regali (approximate translation: "Royal Residents") - appointed directly by the King - instead of the prefects. This administrative change was short-lived: due to World War II, the Second Vienna Award, the Ribbentrop-Molotov pact and the loss of territory that they incurred, this administrative reform did not last and the counties were re-established after the fall of Carol's regime.

Main article: Administrative divisions of the Kingdom of Romania (1941–44) 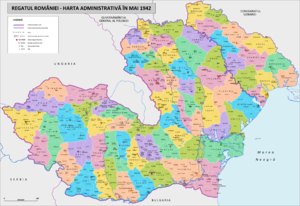 Administrative divisions of Romania in 1942

This territory was administered by Romania briefly in 1941-1944, when the country was governed by a military dictatorship allied with Nazi Germany. It consisted of formerly proper Soviet territory between Dniester and Southern Bug rivers. Nowadays, most of it is in Ukraine, with small parts in the Republic of Moldova (Transnistria). This territory was kept under Romanian military occupation, and was not annexed by Romania. It was divided into 13 counties:

Lost during and after the war

In 1913, as a result of the Second Balkan War, Romania acquired Southern Dobruja from Bulgaria, annexing this historical region within Romania's borders. In 1940, Nazi Germany and Fascist Italy forced Romania to return it to Bulgaria (see Treaty of Craiova). Romania did not reclaim this area neither after the end of World War II nor at the fall of communism.

To the Soviet Union

In 1940, Soviet Union occupied Bessarabia, northern Bukovina, and Hertza region (the latter a part of the Dorohoi County of rump Moldavia). Since the fall of the Soviet Union in 1991, these territories have been part of the newly independent Moldova and Ukraine.

See also: Administrative divisions of the People's Republic of Romania

In 1951, the Communist Party changed the administrative division of Romania to the Soviet model (regions and raions), but reverted to the county system in 1968, although county borders were quite different from the interwar period. A small adjustment was performed in 1981: former counties of Ilfov and Ialomița were reorganized into the present-day counties of Giurgiu, Călărași, Ialomița and Ilfov.

A new law on the administrative division from September 6, 1950, abolished the 58 remaining counties (as well as the 424 plăși and the 6,276 urban and rural communes), replacing them with 28 regions composed of 177 raions, 148 cities and 4,052 communes.[4] In 1952 the number of regions was reduced to 18: Arad, Bacău, Baia Mare, Bârlad, București, Cluj, Constanța, Craiova, Galați, Hunedoara, Iași, Oradea, Pitești, Ploiești, Stalin, Suceava, Timișoara, and for the first time and autonomous administrative unit based on ethnic criteria, Magyar Autonomous Region (Regiunea Autonomă Maghiară).[5] In 1956 the regions of Arad and Bârlad were also dismantled.[6] In 1960, the Hungarian autonomous unit was renamed to Regiunea Mureș-Autonomă Maghiară (Mureș-Hungarian Autonomous Region) along with changes in its territory. The final number of regions was 16.

In February 1968, the old administrative division of județ was reinstated. On January 14, 1968 the law proposal included 35 counties. The final result was substantially different from the situation existent before 1950. This included 39 counties, municipality of Bucharest, 236 cities, out of which 47 were municipalities, and 2706 communes comprising 13149 villages.[7] There were several reasons for restoring the județe. For one, the Nicolae Ceaușescu regime wished to distance itself from the Soviet Union, and discarding the Soviet administrative model was a means of achieving that. For another, the regime had a nationalist outlook, and bringing back an old Romanian system fit with the prevailing ideology. Finally, during his first years, Ceaușescu was preoccupied with replacing functionaries named by his predecessor Gheorghe Gheorghiu-Dej and creating his own power base; dismissing the regional administrations and naming his own county officials was a step in that process.[8]

In 1981 the Ilfov County was divided into a so-called "Agricultural Sector" of Ilfov (Sectorul Agricol Ilfov) and the newly created Giurgiu County, and Călăraṣi County was created by detaching the southern part of the Ialomiṭa County. The county borders introduced in 1968 are largely in place at present, but administrative reforms during the 1990s have devolved the functions of different authorities in line with transition from a totalitarian communist system to a modern democracy. The only territorial adjustment after 1989 occurred in 1995, when Ilfov County was formed out of the so-called "agricultural sector" of the Municipality of Bucharest (Sectorul Agricol Ilfov). With Romania's integration into the European structures, its counties became NUTS level 3 divisions of the European Union.

As of 2009, Romania is divided into 41 counties and one municipality, as follows:

As of 2010-2011 there have been several proposals for the administrative reorganization of Romania made by the presidential commission tasked with the analysis of the current political and constitutional system.[9] Most of these recommendations aim for the partial reestablishment of the counties in their pre-1950 form (NUTS III level). If this reform were adopted, the counties would be grouped into several regions (9 to 15) based on common historical and economic characteristics (NUTS II level). The regions will be in their turn clustered into 4-6 macroregions (NUTS I level). Furthermore, a NUTS IV level division, called plasă or canton, would probably be added in order to meet the EU statistical and administrative requirements.[10]

Another proposal, based on 15 autonomous euro-regions (amongst them one ethnic-based region with a consistent Hungarian majority consisting of the existing Mureş, Harghita and Covasna counties) grouped into 5 statistical macroregions (NUTS I), was made by the Democratic Union of Hungarians in Romania.[11]