Asian American history is the history of an ethnic and racial groups in the United States who are immigrants or descendants of persons from the continent of Asia. Spickard (2007) shows that "'Asian American' was an idea invented in the 1960s to bring together Chinese, Japanese, and Filipino Americans for strategic political purposes. Soon other Asian-origin groups, such as Korean, Vietnamese, Hmong and South Asian Americans, were added."[1] They had arrived as unskilled workers in significant numbers 1850–1905, and largely settled in Hawaii and California. They were the subject of intense hostility on the mainland into the 1940s.[2] Since the change in the immigration laws in 1965, middle class Asians from many countries arrived in large numbers as college students, engineers and businessmen.[3] Their image of success was often portrayed with headlines of the "Model Minority".[4] For the contemporary situation see Asian American. 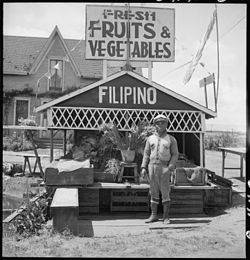 The Chinese arrived in the U.S. in large numbers on the West Coast in the 1850s and 1860s to work in the gold mines and railroads. They encountered very strong opposition—violent as riots and physical attacks forced them out of the gold mines (citation needed). The Central Pacific railroad hired thousands, but after the line was finished in 1869 they were hounded out of many railroad towns in states such as Wyoming and Nevada. Most wound up in Chinatowns—areas of large cities which the police largely ignored. The Chinese were further alleged to be "coolies" and were said to be not suitable for becoming independent thoughtful voters because of their control by tongs. The same negative reception hit the Asians who migrated to Mexico and Canada.[5][6]

The Japanese arrived in large numbers 1890–1907, many going to Hawaii (an independent country until 1898), and others to the West Coast. Hostility was very high on the West Coast, but not especially violent. Hawaii was a multicultural society in which the Japanese experienced about the same level of distrust as other groups. Indeed, they were the largest population group by 1910, and after 1950 took political control of Hawaii. The Japanese on the West Coast of the U.S. (as well as Canada and Latin America) were interned during World War II, but very few on Hawaii at the Honouliuli Internment Camp.

According to Chan (1996), the historiography of Asians in America falls into four periods. The 1870s to the 1920s saw partisan debates over curtailing Chinese and Japanese immigration; "Yellow Peril" diatribes battled strong, missionary-based defenses of the immigrants. Studies written from the 1920s to the 1960s were dominated by social scientists, who focused on issues of assimilation and social organization, as well as the World War II internment camps. Activist revisionism marked the 1960s to the early 1980s as a new wave of Asian-American scholars rejected the dominant assimilationist paradigm, and instead turned to classical Marxism and internal colonialist models. Starting in the early 1980s there was an increased stress on human agency. Only after 1990 has there been much scholarship by professional historians.

Major milestones according to standard reference works[7] are: