The history of Canada (1992–present) refers to the period immediately following the late 1980s, until present.

In 1992 Prime Minister Brian Mulroney's Fisheries and Oceans Minister John Crosbie declared a moratorium on the northwestern Atlantic cod fishery, which had dominated the Newfoundland and Labrador economy for 500 years and provided sustenance for generations of residents. The moratorium was declared after cod biomass levels dropped to 1% of its historical level.[1]The moratorium resulted in a loss of 35,000 jobs in 400 coastal communities in Newfoundland and Labrador, the largest one day job loss in Canadian history. [2]

The failure of the Meech Lake Accord and the animosity towards Prime Minister Brian Mulroney, his government and his Goods and Services Tax (GST) played a significant role in the defeat of the 1992 referendum on the Charlottetown Accord, another package of proposed constitutional amendments. These setbacks, along with the deep recession of the late 1980s and early 1990s forced Mulroney to resign in 1993. He was replaced, albeit only briefly from June to November 1993, by Kim Campbell, Canada's first, and so far only female Prime Minister.

Jean Chrétien became prime minister in the 1993 election, pledging to repeal the GST, although this proved unfeasible due to the economic circumstances at the time (or, apparently, any time during his prime ministership, showing the new source of income was needed, as the outgoing Progressive Conservative party had claimed).[neutrality is disputed] By 1995, however, Canada had eliminated the federal deficit, becoming the only G7 country to have a budget surplus.

Some of the problems faced by the Chrétien government included the debate over the universal health care system, as well as military spending, which Chrétien's government decreased significantly throughout its term. Canada did not play as large a role in United Nations peacekeeping as it once had, and Chrétien faced some criticism for not participating in the 2003 invasion of Iraq, most notably from Opposition Leader Stephen Harper and the United States government. However, with the mounting criticisms about the false pretences for that war and the United States' troubled occupation of Iraq, Chrétien was hailed for keeping the nation out of the affair. The value of the Canadian dollar was greatly weakened during Chrétien's time as Prime Minister, dropping as low at 67 cents; although in 2003, it regained about 20% of its value during the year due to the declining economic situation in the United States—such a dramatic climb that industry leaders worried that the high currency would harm exports.

The "Turbot War" of 1990 was an international fishing dispute between Canada and the European Union which ended in the Canadian Department of Fisheries and Oceans boarding a Spanish fishing trawler, the Estai, in international waters and arresting its crew. Canada claimed that European Union factory fishing trawlers were illegally overfishing the nose and tail of the Grand Banks, just outside Canada's declared 200 nautical mile (370 km) Exclusive Economic Zone (EEZ).[3]

The Spanish ship's crew had been using a net with a mesh size that was smaller than permitted (larger mesh sizes permit juvenile fish to escape and grow). The 17 story net was shipped to New York City and hung from a crane on the East River where federal Minister of Fisheries and Oceans, Brian Tobin called an international press conference outside the United Nations headquarters.[4] Spain never denied that the net was from the Estai but continued to protest Canada's use of "extra-territorial force". The Spanish government asked the International Court of Justice in The Hague, Netherlands for leave to hear a case claiming Canada had no right to arrest the Estai. However, the court later refused the case.[5]

In October 1995, Canada faced its second Quebec referendum on sovereignty. The federal Bloc Québécois and the provincial Parti Québécois favoured separation from Canada. Federalists rallied to keep Quebec as part of Canada and claimed the referendum question ("Do you agree that Quebec should become sovereign after having made a formal offer to Canada for a new economic and political partnership within the scope of the bill respecting the future of Quebec and of the agreement signed on June 12, 1995?") was vague and confusing. After large campaigns from both the "'oui" and "non" sides, the referendum was defeated by the narrowest of margins: a victory for those opposed to secession, with 50.58% of the vote. [6] 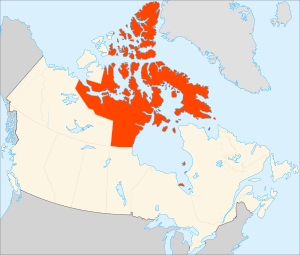 Nunavut on the map of Canada

In April 1982, a majority of Northwest Territories residents voted in favour of a division of the area, and the federal government gave a conditional agreement seven months later. After a long series of land claim negotiations between the Inuit Tapirisat of Canada and the federal government (begun earlier in 1976), an agreement was reached in September 1992. In June 1993, the Nunavut Land Claims Agreement Act and the Nunavut Act[7] were passed by the Canadian Parliament, and the transition to the new territory of Nunavut was completed on April 1, 1999.

After the end of the Cold War, the frequency of international peacekeeping missions and humanitarian interventions grew dramatically and Canadian participation grew along with it. In the 1990s, Canadians were active in United Nations peacekeeping missions in Western Sahara, Cambodia, the former Yugoslavia, Haiti, East Timor and Sierra Leone. During the US-led humanitarian mission to Somalia in 1993, Canadian soldiers tortured a Somali teenager to death, leading to the Somalia Affair. Following an inquiry, the elite Canadian Airborne Regiment was disbanded and the reputation of the Canadian Forces suffered within Canada.

Following the resignation of Prime Minister Chrétien at the end of 2003, Canadian Auditor General Sheila Fraser released a report in February 2004 which revealed that $100 million was mishandled by government officials in the purchasing of advertisements under the Chrétien government.[8] The opposition was quick to make charges of corruption in what become known as the Sponsorship Scandal.

Owing in large part to the scandal, the Liberal Party (by this time, led by Paul Martin) lost its majority in the 2004 election, but was able to form a minority government. The 38th Canadian Parliament successfully passed the Civil Marriage Act, legalizing same-sex marriage in Canada, despite the opposition of the newly formed Conservative Party of Canada. Ultimately, the Liberals fell to a motion of no confidence in November 2005, leading to another election after only two years.

Stephen Harper's Conservatives were able to secure minority governments in the 2006 and 2008 federal elections. In December 2008, a parliamentary dispute began when the Liberal leader Stéphane Dion and the New Democratic Party leader Jack Layton announced an agreement to form a coalition government with the support of the Bloc Québécois if they were successful in ousting the Conservative minority government in a confidence vote. Governor General Michaëlle Jean, however, granted the Conservatives' request to prorogue parliament until January 26, 2009, thereby avoiding the confidence vote.

The succession of minority governments ended on May 2, of 2011 when Stephen Harper and his Conservative party won the 41st Canadian federal election with a majority of seats (166 of a total of 308 seats) over Jack Layton's New Democratic Party (which formed the official opposition, with 103 seats, after winning all but four of the seats formerly held by the Bloc Québécois in Quebec and making gains elsewhere in Canada) while the Liberals under Michael Ignatieff finished third for the first time in that party's history, with 34 seats.