The history of the German language as separate from common West Germanic begins in the Early Middle Ages with the High German consonant shift. Old High German, Middle High German and Early Modern High German span the duration of the Holy Roman Empire. The 19th and 20th centuries saw the rise of Standard German and a decrease of dialectal variety.

The earliest testimonies of Old High German are from scattered Elder Futhark inscriptions, especially in Alemannic, from the 6th century, the earliest glosses (Abrogans) date to the 8th and the oldest coherent texts (the Hildebrandslied, the Muspilli and the Merseburg Incantations) to the 9th century.

Middle High German (MHG, German Mittelhochdeutsch) is the term used for the period in the history of the German language between 1050 and 1350. It is preceded by Old High German and followed by Early New High German. In some older scholarship, the term covers a longer period, going up to 1500.

When Martin Luther translated the Bible (the New Testament in 1522 and the Old Testament, published in parts and completed in 1534) he based his translation mainly on this already developed language, which was the most widely understood language at this time. This language was based on Eastern Upper and Eastern Central German dialects and preserved much of the grammatical system of Middle High German (unlike the spoken German dialects in Central and Upper Germany that at that time had already begun to lose the genitive case and the preterite). In the beginning, copies of the Bible had a long list for each region, which translated words unknown in the region into the regional dialect. Roman Catholics rejected Luther's translation at first and tried to create their own Catholic standard (gemeines Deutsch) — which, however, differed from 'Protestant German' only in some minor details. It took until the middle of the 18th century to create a standard that was widely accepted, thus ending the period of Early New High German.

Low German, being at the crossroads between High German, Anglo-Frisian and Low Franconian has a less clear-cut linguistic history, epitomizing that the West Germanic group is really a dialect continuum. It was strongly influenced by Anglo-Frisian in Early Medieval times, and by High German during the duration of the Holy Roman Empire. After the end of the Hanseatic League in the 17th century, Low German was marginalized to the status of local dialects.

Old Saxon, also known as Old Low German, is a West Germanic language. It is documented from the 9th century until the 12th century, when it evolved into Middle Low German. It was spoken on the north-west coast of Germany and in Denmark by Saxon peoples. It is closely related to Old Anglo-Frisian (Old Frisian, Old English), partially participating in the Ingvaeonic nasal spirant law.

The Middle Low German language is an ancestor of the modern Low German. It was spoken from about 1100 to 1500, splitting into West Low German and East Low German. The neighbour languages within the dialect continuum of the West Germanic languages were Middle Dutch in the West and Middle High German in the South, later substituted by Early New High German. Middle Low German was the lingua franca of the Hanseatic League, spoken all around the North Sea and the Baltic Sea. Based on the language of Lübeck, a standardized written language was developing, though it was never codified.

German was the language of commerce and government in the Habsburg Empire, which encompassed a large area of Central and Eastern Europe. Until the mid-19th century it was essentially the language of townspeople throughout most of the Empire. It indicated that the speaker was a merchant, an urbanite, not his nationality. Some cities, such as Budapest (Buda, German: Ofen), were gradually Germanized in the years after their incorporation into the Habsburg domain. Others, such as Bratislava (German: Pressburg), were originally settled during the Habsburg period and were primarily German at that time. A few cities such as Milan (German: Mailand) remained primarily non-German. However, most cities were primarily German at least during the early part of the century, such as Prague, Budapest, Bratislava, Zagreb (German: Agram), and Ljubljana (German: Laibach), though they were surrounded by territory where other languages were spoken.

Media and written works are almost all produced in standard German (often called Hochdeutsch in German), which is understood in all German-speaking areas (except by pre-school children in areas where only dialect is spoken, for example Switzerland — but in this age of TV, even they now usually learn to understand Standard German before school age).

The first dictionary of the Brothers Grimm, which was issued in 16 parts between 1852 and 1860, remains the most comprehensive guide to the lexicon of the German language. 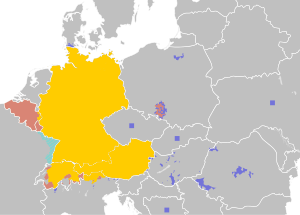 Spread of the German language since 1950

In 1880, grammatical and orthographic rules first appeared in the Duden Handbook. In 1901, this was declared the standard definition of the German language. Standard German orthography subsequently went essentially unrevised until 1998, when the German spelling reform of 1996 was officially promulgated by government representatives of Germany, Austria, Liechtenstein, and Switzerland. Since the reform, German spelling underwent an eight-year transitional period, during which the reformed spelling is taught in most schools, while traditional and reformed spelling co-exist in the media.