This article covers the history of London of the early 20th century, from 1900 to the outbreak of World War II in 1939. London entered the 20th century at the height of its influence as the capital of the largest empire in history, but the new century was to bring many challenges. London was the largest city in the world from about 1825 until it was overtaken by New York in 1925.[1]

Round About a Pound a Week, a report by the Fabian Society of an intervention between 1909 and 1913, describes the lives of the "respectable poor"; one in five of their children died in the first year, and hunger, illness, and colds were the norm.

During World War I, London experienced its first bombing raids, carried out by German zeppelin airships and later by aeroplanes. On 31 May 1915 the first aerial bombing raid on London was carried out by a zeppelin, which dropped high explosives over the East End and the docks, killing seven people. There were a further ten airship raids over London during 1915 and 1916 and a further one in 1917.

By 1917, British success at shooting down airships persuaded the German military to instead use aeroplanes to attack London. The first attack by bombers occurred in May 1916 when a single plane attacked the East End. By May 1917 a squadron of Gotha biplanes was assembled. On 13 June 1917 the largest World War I air raid on London was carried out, resulting in about 160 deaths. In this raid fourteen Gotha bombers bombed numerous targets in the City and the East End, including the Fenchurch Street/Aldgate area, Royal Albert Dock, Liverpool Street Station and Upper North Street School in Poplar. Sixteen children were killed at the school, causing public outrage. Further raids followed during 1917 and 1918. However, by May 1918 British air defences had improved sufficiently to start inflicting heavy German losses, and this persuaded Germany to call the raids off.

These air raids killed around 670 people, injured 1,960 and caused great terror among London's population, though of far greater impact was the number of Londoners who were killed in combat: about 124,000 young men never returned from the war.

The largest explosion in London's history, the Silvertown explosion, occurred during World War I. A munitions factory containing 50 tons of TNT exploded, killing 73 and injuring 400.

The early 20th century, especially during the interwar years of the 1920s and 1930s, saw the geographical extent of London's urban area grew faster than at any point before or since. Most of the development was of suburban expansion into the neighbouring counties of Essex, Hertfordshire, Kent, Middlesex and Surrey. A preference for lower density suburban housing, typically semi-detached, by Londoners seeking a more "rural" lifestyle, superseded Londoners' old predilection for terraced houses. The rapid expansion of London during this period swallowed up large swathes of countryside. Fears over the loss of countryside led eventually to the introduction of the Metropolitan Green Belt, restricting urban growth. 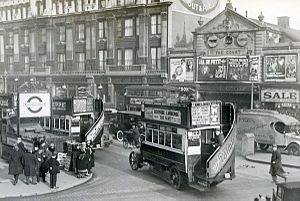 This meant that London outgrew the boundaries of the County of London, which led to calls by the London County Council for the creation of a single Greater London authority covering the entire urban area, although this was rejected by a Royal Commission in 1921.

The rapid growth of London during this period was facilitated by a rapid expansion and modernisation of transport networks. A large tram network was constructed by the London County Council, through the LCC Tramways. And the first motorbus service began in the 1900s (decade).

Large scale electrification of London's commuter railways took place during the interwar period, mostly by the Southern Railway, and the London Underground system was expanded to London's northern outer suburbs. In 1933, the London Passenger Transport Board was created to coordinate transport over a large area of south-east England. The road network was modernised with a network of arterial roads being constructed in the 1920s.

The population of London's urban area reached its all time peak of about 8.6 million in 1939. All of this growth occurred outside of the boundaries of the County of London; the population of which actually fell during the interwar years from 4.5 to 4 million.

Large numbers of Jewish immigrants fleeing from Nazi Germany, settled in London during the 1930s, mostly in the West End.

Prior to World War One, Britain was the world’s economic superpower.[2] Despite its flourishing economy, Britain was simply not prepared for the economic impact that the war would have.[2] While London remained fairly prosperous relative to the rest of Britain during the interwar years, their economy still experienced an inevitable decline. After the beginning of World War One in 1914, Britain experienced a massive financial crisis due to market panic.[2] There were several reasons why London was able to remain relatively prosperous throughout the interwar years. One major reason was the significant amount of population growth London experienced during these years. In fact, London’s population increased from 7.25 million in 1911 to 8.73 million in 1939.[3] Another major aspect that helped fuel the economy was the Pax Britannica, which brought business through an increase in shipping, imports, and even investments.[3]

Obviously, London was faced with the huge economic demand of war. In fact, Britain spent over 3,251,000,000 euros from 1914-1918.[2] The government took action in order to raise money and revive the economy; Government officials raised direct taxes of property and income, took out large international loans, and increased the printing of money.[2] And while these economic tactics were ultimately successful for all of Britain, London still had to endure rising unemployment and was forced to adapt its workforce. In fact, the unemployment rate for those workers who were covered by national insurance in London increased from 7 percent to 10 percent just from July to August 1914.[4] A major reason why unemployment didn’t get too high during the interwar years was due to the significant increase of women in the workforce. While there was a relatively high number of women in the workforce prior to the war, the number continued to rise; “Women’s employment went from 23.6% of the working age population in 1914 to between 37.7% and 46.7% in 1918”.[5] The largest employer of women was the munitions industries – which were primarily employed by women at the time. By 1917, the munition factories in Britain accounted for 80 percent of all weapons and shells used by the British Army. Despite the huge role women played in the maintenance of the economy, they still only received around two-thirds of the pay that men received for the same jobs.[5] “At the end of the first world war the combination of pent-up consumer demand, high money income, a large volume of liquid or near-liquid assets and a backlog of investment fuelled a boom in economic activity which lasted roughly one year, from March 1919 to April 1920”.[4]

London managed to escape the worst effects of the Great Depression – which spanned from 1929 until 1939. “Even in the dark days of the 1930s unemployment barely bit because London, unlike the industrial North, had never become dangerously over dependent on the Empire, but the Empire was in tact”.[3] Despite the fact that most parts of the United Kingdom were facing rising unemployment rates and widespread poverty even as early as 1929, London only had an unemployment rate of 5.6 percent.[6] The areas that were hit the hardest that were the ones that most reliant on heavy industry – such as Northern Ireland, Scotland and Wales.[7] London, on the other hand, had relatively little business in the heavy industry and was more involved in some of the light industries – such as chemicals, electrical goods and automobiles.[7]

In 1934 the Labour Party led by Herbert Morrison won control of the LCC for the first time. The Labour Party would dominate the council until its abolition and replacement by the Greater London Council in 1965.

In the East End during the 1930s, politically extreme parties of both right and left flourished. The Communist Party of Great Britain won a seat in the House of Commons, and the far-right British Union of Fascists received extensive support. Clashes between right and left culminated in the Battle of Cable Street in 1936.