Portsmouth is an island port city situated on Portsea Island in the county of Hampshire, England. Its history has been influenced by its association with the sea, and its proximity to London, and mainland Europe.

Portus Adurni which later became known as Portchester Castle, was one of the Saxon Shore Forts and was a major base of the Classis Britannica and possibly its Headquarters.

Although there have been settlements in the area since before Roman times, mostly being offshoots of Portchester, Portsmouth is commonly regarded as having been founded in 1180 by John of Gisors (Jean de Gisors). Most early records of Portsmouth are thought to have been destroyed by Norman invaders following the Norman Conquest. The earliest detailed references to Portsmouth can be found in the Southwick Cartularies.[1]

However, the Oxford Dictionary of British Place Names gives the Anglo-Saxon name "Portesmūða" as late as the 9th century, meaning "mouth [of the harbour called] Portus" (from Latin). In Anglo-Saxon times a folk etymology "[harbour] mouth belonging to a man called Port" arose, which caused a statement in the Anglo-Saxon Chronicle that in 501 AD "Port and his 2 sons, Bieda and Mægla, came with 2 ships to Britain at the place which is called Portsmouth". It has been suggested that this is more likely to refer to the area around Portchester.[1]

In the Domesday Book there is no mention of Portsmouth. However, settlements that later went on to form part of Portsmouth are listed. These are Buckland, Copnor, Fratton on Portsea Island and Cosham, Wymering and Drayton on the mainland. At this time it is estimated the Portsmouth area had a population not greater than two or three hundred.

While in the primary diocese of Portsea there was a small church prior to 1166 (now St Mary's in Fratton) Portsmouth's first real church came into being in 1181 when John of Gisors granted an acre (4,000 m²) of land to Augustinian monks at the Southwick Priory to build a chapel dedicated to Thomas Becket. This chapel continued to be run by the monks of Southwick Priory until the Reformation after which its possession was transferred to Winchester College. The modern Portsmouth Anglican Cathedral is built on the original location of the chapel.[1] The original grant referred to the area as Sudewde however a later grant a few years later used the name Portsmouth.[1]

Growth of the city

In 1194, after he returned from being held captive by Duke Leopold V of Austria, King Richard I (The Lionheart) set about summoning a fleet and an army to Portsmouth, which he had taken over from John of Gisors.[2] On 2 May 1194 the king gave Portsmouth its first Royal Charter granting permission for the city to hold a fifteen-day annual fair (which became known as the Free Market Fair), weekly markets (on Thursdays), to set up a local court to deal with minor matters,[2] and exemption from paying the annual tax ("farm") of £18 a year—instead the money would be used for local matters. The actual physical charter was handed over by the Bishop of Ely William de Longchamps.[2] The present location of the charter is currently unknown but its text survives, as when later royal charters were granted to the city reaffirming and extending its privileges large parts of the original charter were quoted verbatim.

As a crescent and an eight-point star (as appear on the city's coat of arms) were to be found on both the seals of King Richard and William de Longchamps it is commonly thought that this may have been the source of them, although there is no known documentary evidence for this.

King Richard later went on to build a number of houses and a hall in Portsmouth.[3] The hall is thought to have been at the current location of the Clarence Barracks (the area was previously known as Kingshall Green).

In 1200 King John issued another charter to Portsmouth reaffirming the rights and privileges awarded by King Richard.[3] Acquiring this second charter cost Portsmouth ten marks and a type of riding horse known as a Palfrey.[3] King John's desire to invade Normandy resulted in the establishment of Portsmouth as a permanent naval base.[4]

In 1212 William of Wrotham (Archdeacon of Taunton, Keeper of the King's Ships) started constructing the first docks of Portsmouth. At about the same time Pierre des Roches, Bishop of Winchester, founded Domus Dei (Hospital of St Nicholas) which performed its duties as an almshouse and hospice until 1540 when like other religious buildings it was seized by King Henry VIII.

During the 13th century, Portsmouth was commonly used by King Henry III and Edward I as a base for attacks against France.

In 1265, the city was on the receiving end of a serious raid by the Barons of the Cinque Ports.[5] After scattering the defenders, they seized various ships and cargo and burned the town.[5]

By the 14th century, commercial interests had grown considerably, despite rivalry with the dockyard of nearby Southampton. Common imports included wool, grain, wheat, woad, wax and iron, however the ports largest trade was in wine from Bayonne and Bordeaux.

In 1313, the town received a charter from Edward II.[6] This is the oldest of the city's charters that is known to have survived[6]

In 1338, a French fleet led by Nicholas Béhuchet arrived at Portsmouth docks flying English flags before anyone realised that they were a hostile force. The French burned down most of the buildings in the town; only the local church and Domus Dei survived. The population was subjected to rape and slaughter. As a result of this, King Edward III gave the remaining townsfolk exemption from national taxes so that they could afford to rebuild the town.

Only ten years after this devastation, the town for the first time was struck by the plague known as the Black Death. In order to prevent the regrowth of Portsmouth as a threat, the French again sacked the city in 1369, 1377 and 1380.

In 1418, King Henry V ordered a wooden Round Tower be built at the mouth of the harbour, which was completed in 1426.

In 1450, Adam Moleyns Bishop of Chichester was murdered while in Portsmouth.[7] 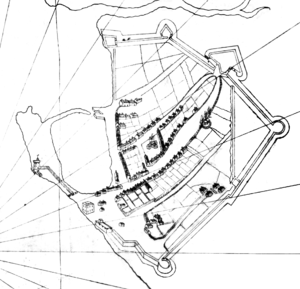 Portsmouth in the early Tudor period

Through the Tudor period, Portsmouth's fortification's were subject to almost continuous reworking. Under King Henry VIII the Round Tower was rebuilt out of stone and a Square Tower was raised. It was at this time that Robert Brygandine and Sir Reginald Bray, with the support of the king, commenced the building in Portsmouth of the country's first dry dock. In 1527 with some of the money obtained from the dissolution of the monasteries Henry VIII built the fort which became known as Southsea Castle. In 1545, he saw his vice-flagship Mary Rose founder off Southsea Castle, with a loss of about 500 lives, while going into action against the French fleet. It was during the Tudor period that the town gained its first military governor.[8] The role of managing military operations in Portsmouth had previously been the duty of the constable of Portchester Castle.[8]

It was also in the Tudor period that two mills were established at the end of the creek just above the town.[10] The creek later developed into the body of water known as the mill pond.[10]

During the English civil war, the city was initially held by the royalist faction before falling to parliament after the Siege of Portsmouth.[11]

In 1665, Charles II of England ordered Bernard de Gomme to begin the reconstruction of Portsmouth's fortifications a process which was to take many years.[12]

Portsmouth's overland links to London started to be improved with an early turnpike trust being set up to improve the road where it passed Butser Hill.[13]

In 1714, the crown purchase the two mills at the entrance to the millpond.[10] 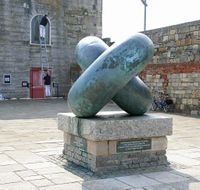 The First Fleet memorial in Portsmouth.

In 1774, the two mills at the entrance to the millpond were rebuilt as one mill known as the Kings's mill.[10]

On 13 May 1787 the First Fleet of ships left Portsmouth Harbour bound for Australia, taking the first British settlers there. They would arrive in Botany Bay on 18 January 1788. A memorial, officially unveiled by HM The Queen on 11 July 1980, commemorates the First Fleet, with a similar memorial in Sydney, New South Wales.[15]

Admiral Nelson left Portsmouth for the final time in 1805 to command the fleet that would defeat the larger Franco-Spanish fleet at Trafalgar.[16] The Royal Navy's reliance on Portsmouth led to the city becoming the most fortified in Europe, with a network of forts circling the city.[citation needed]

From 1808, the Royal Navy's West Africa Squadron, who were tasked to stop the slave trade, operated out of Portsmouth.

The King's mill burned down in 1868 and over the next decade land was reclaimed from the millpond until it ceased to exist.[10]

On 21 December 1872 a major scientific expedition, the Challenger Expedition, was launched from Portsmouth.

While an extensive number of subscription libraries were formed in Portsmouth in the early part of the 19th century Portsmouth was trailed many other cities in the provision of public libraries the first not being opened until 1884.[20] 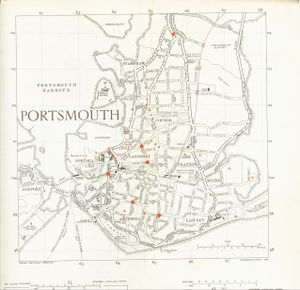 The city in the form of Portsmouth Corporation Transport purchased the private horse-drawn tram lines in 1901.

In 1904, the boundaries of Portsmouth were extended to finally include the whole of Portsea Island. The boundaries were further extended in 1920 and 1932, taking in areas of the mainland.

In 1916, the city experience its first aerial bombardment when a Zeppelin airship bombed it during the First World War.[21]

As a major Naval Base and Dockyard the city was bombed extensively during the Second World War. Nazi German Luftwaffe night-time air raids began on 24 August 1940 when 1,320 of high explosive bombs, 38,000 incendiary devices were dropped on the city, damaging the Guildhall, 30 churches, 8 schools, 1 hospital and over 80,000 homes. 930 people were killed and 1,216 people were injured. While most of the city has since been rebuilt, to this day developers still occasionally find unexploded bombs.

Southsea beach and Portsmouth Harbour were military embarkation points for the D-Day landings on 6 June 1944. Southwick House, just to the north of Portsmouth, had been chosen as the headquarters for the Supreme Allied Commander, US General Dwight D. Eisenhower, during D-Day.

After the war, much of the city's housing stock was damaged and more was cleared in an attempt to improve the quality of housing. Those people affected by this were moved out from the centre of the city to new developments such as Paulsgrove and Leigh Park. On 4 July 1968, an estimated 250,000 people witnessed the return of Alec Rose, a greengrocer in Osborne Road, after he completed his single-handed circumnavigation in Lively Lady; he was immediately knighted and made a Freeman of the city. 400 motor-boats, yachts, catamarans and canoes welcomed him into harbour.

The University of Portsmouth gained university status in 1992

In 2003 erection was started of a 552 feet high Spinnaker Tower sited at Portsmouth Harbour, and celebrating the city's maritime tradition. Completed in 2005, the tower has twin concrete legs meeting at half height to form a single column from which steel sails are mounted; an observation deck at the top provides a view of the city and harbour for tourists.

In late 2004, the Tricorn Centre, dubbed "The ugliest building in the UK" was finally demolished after years of delay and wrangling over the cost of doing so, and controversy as to whether it was worth preserving as an example of 1960s Brutalist architecture.[22]

In 2005, Portsmouth was a focus for Sea Britain, a series of events to mark the 200th anniversary (bicentenary) of Lord Nelson's victory at the Battle of Trafalgar. In particular, in June, there was the massive Fleet Review, by HM Queen Elizabeth II and a mock battle (son et lumière) that evening, after dark.