History of Roman Catholicism in Italy

The History of Roman Catholicism in Italy is part of the history of the Catholic Church, under the spiritual leadership of the Pope, curia in Rome, and the Conference of Italian Bishops. In addition to Italy, two other sovereign nations are included in Italian-based dioceses, San Marino and Vatican City. There are 225 dioceses in the Italian Catholic Church, see further in this article and in the article List of the Roman Catholic dioceses in Italy.

The pope resides in the Vatican City, in Rome. Rome, and Italy, have been major centres for Christian pilgrimage since the Roman Empire, and Rome is commonly regarded as the "home of the Roman Catholic Church", since it is where St Peter traveled, ministered, served as bishop, and died.[1] 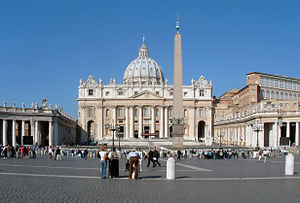 Christianity arrived on the Italian peninsula in the first century, probably by unknown travelers, traders or soldiers. Letter to the Romans of Paul the Apostle is addressed and attests to the presence of Roman Christians in the first century. Christians in Rome were also in touch with St. Peter and St. Paul the Apostle, both of whom went to Rome on mission and were eventually martyred there. One of the first Italian bishops and popes was Clement of Rome who wrote a letter to the Christian community in Corinth (1 Clement) around AD 96.

Around 85% of the Italian population is Catholic, of which one-third are active members[2] Italy has 225 dioceses and archdioceses, more than any other country in the world with the exception of Brazil. It also has the largest number of parishes (25,694), female (102,089) and male (23,719) religious, and priests (44,906 including secular (i.e. diocesan) and religious (those belonging to a male religious institute)).[citation needed]

Map of the 16 Italian ecclesiastical regions

The Primate of Italy is the Bishop of Rome, who is also ex officio Pope of the Catholic Church. The Apostolic Nuncio to Italy is also the nuncio to San Marino; the incumbent is Italian Archbishop Giuseppe Bertello, who has held the office since January 2007.

There are two Catholic particular churches in Italy:

The Latin Church in Italy is organized into: