St Albans is in southern Hertfordshire, England, around 22 miles (35 km) north of London, beside the site of a Catuvellauni settlement and the Roman town of Verulamium and on the River Ver. St Albans is Hertfordshire's oldest town, a modern city shaped by over 2000 years of continuous human occupation.

The town is first recorded as Verulamium, a Celtic British Iron Age settlement whose name means 'the settlement above the marsh'. After the Roman conquest of Britain in AD 43, it developed as Verulamium and became one of the largest towns in Roman Britain and the capital city . Built mainly of wood, it was destroyed during the revolt of Boudica in AD 60-61, but was rebuilt and grew to feature many impressive town houses and public buildings. It was encircled by gated walls in AD 275.

The Roman City of Verulamium slowly declined and fell into decay after the departure of the Roman Army in AD 410. However, its ruined buildings provided building materials to build the new monastic and market settlement of St Albans which was growing on the hill above, close to the site of Saint Alban's execution. In the Norman Abbey tower, you can still see the Roman bricks removed from Verulamium.

Much of the post-Roman development of St Albans was in memorial to Saint Alban, the earliest known British Christian martyr, executed in AD 250 (the exact date is unknown, with scholars suggesting dates of 209, 254 and 304). The town itself was known for some time by the Saxon name 'Verlamchester'. A shrine was built on the site of his death following Emperor Constantine's adoption of Christianity as the religion of the Roman Empire. In the 5th century a Benedictine monastic church was constructed.

The Abbey is founded

Another abbey was founded by King Offa of Mercia in 793. The settlement grew up around the precincts of another It was 350 feet (110 m) long with a tower and seven apses.

A nunnery, Sopwell Priory, was founded nearby in 1140 by Abbot Geoffrey de Gorham.

The head of the abbey was confirmed as the premier abbot in England in 1154. The abbey was extended by John of Wallingford (also known as John de Cella) in the 1190s, and again between 1257 and 1320 but financial constraints limited the effectiveness of these later additions.

In August 1213 the first draft of Magna Carta was drawn up in St Albans Abbey.

The Liberty of St Albans was given palatine status by Edward I. In 1290 the funeral procession of Eleanor of Castile stopped overnight in the town and an Eleanor cross was put up at a cost of £100 in the Market Place. The cross, which stood for many years in front of the 15th century Clock Tower, was demolished in 1701.

A market was running outside the abbey from the 10th century; it was confirmed by King John of England in 1202 and by a Royal Charter of Edward VI in 1553. 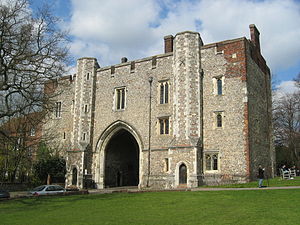 Abbey Gateway from the 1360s

During the 14th century the Abbey came into increasing conflict with the townsfolk of St Albans, who demanded rights of their own. This led, among other things, to the construction of a large wall and gate surrounding the Abbey (for instance, the Great Gatehouse, the "Abbey Gateway", which is the only surviving monastic building other than the Abbey Church, dates from 1365).

Richard of Wallingford, a local landowner, who had presented demands to Richard II on behalf of Wat Tyler in London, brought news of this to St Albans and argued with the abbot over the charter. However, this was short lived. Once the 14-year-old king had regained control of the capital and then the whole country, Grindcobbe was tried in the Moot Hall (on the site of the present-day W H Smith stationery shop, where a plaque commemorates the event) and adjudged a 'traitor' alongside John Ball ('the mad priest of Kent', one of the rebel leaders who had escaped from Smithfield, London to Coventry) and more than a dozen others. He was hanged, drawn and quartered in July 1381.

Another notable building dating from around this time, the Clockhouse belfy or Clock Tower, built between 1403 and 1412, seems to have been intended both as a visible and audible statement of the town's continuing civic ambitions against the power of the Abbot.

Following the Reformation, the Abbey was dissolved in 1539 and the Abbey Church sold to the town in 1553 for £400: it became a Protestant parish church for the borough and the Lady Chapel was used as a school. The Great Gatehouse was used as a prison until the 19th century, when it was taken over by St Albans School. In May 1553, in response to a public petition, the first royal charter for the town was issued by King Edward VI, granting it the status of borough. The charter defined the powers of the mayor and councillors, then known as burgesses, as well as specifying the Wednesday and Saturday market days which continue to this day.

In 1555, during the reign of Queen Mary I, a Protestant Yorkshire baker, George Tankerfield, was brought from London and burnt to death on Romeland because of his refusal to accept the Roman Catholic doctrine of transubstantiation.

During the English Civil War (1642–45) the town sided with parliament but was largely unaffected by the conflict.

Three main roads date from the medieval period - Holywell Hill, St Peter's Street, and Fishpool Street. These remained the only major streets until around 1800 when London Road was constructed, to be followed by Hatfield Road in 1824 and Verulam Road in 1826.

Verulam Road was created specifically to aid the movement of stage coaches, since St Albans was the first major stop on the coaching route north from London. The large number of coaching inns is, in turn, one reason why the City has so many pubs today (another being that it was, and remains, a major centre for Christian pilgrimage).

The railway arrived in 1868, off-setting the decline in coaching since the 1840s.

In 1877, in response to a public petition, Queen Victoria issued the second royal charter, which granted city status to the borough and Cathedral status to the former Abbey Church. The new diocese was established in the main from parts of the large Diocese of Rochester. Lord Grimthorpe financed a £130,000 renovation and rebuilding of the then dilapidated cathedral, which is most apparent in his generally poorly regarded Neo-Gothic rebuild of the west front (1880–1883). However, without Grimthorpe's money, it seems reasonable to assume that the Abbey Church would now almost certainly be a ruin, like many other former monastic churches, despite the work performed under Sir George Gilbert Scott in the years 1860 to 1877.

Ralph Chubb, the poet and printer, lived on College Street in St Albans from 1892 to 1913, and attended St Albans School. His work frequently references the Abbey of St Albans, and he ascribed mystical significance to the geography and history of the town.

In September 1916, following an attack on St Albans, the German Airship SL 11 became the first airship to be brought down over England. But when London Colney was attacked, the nation was so angered it became united in its battle.

File:St Albansmap 1944.jpg
St Albans on the 1 inch to the mile map Ordnance Survey map of 1944

In the inter-war years St Albans, in common with much of the surrounding area, became a centre for emerging high-technology industries, most notably aerospace. Nearby Radlett was the base for Handley Page Aircraft Company, while Hatfield became home to de Havilland. St Albans itself became a centre for the Marconi plc company, specifically, Marconi Instruments. Marconi (later part of the General Electric Company) remained the city's largest employer (with two main plants) until the 1990s. A third plant - working on top secret defence work - also existed. Even Marconi staff only found out about this when it closed down. All of these industries are now gone from the area.

In 1936 St Albans was the last but one stop for the Jarrow Crusade.

The City was expanded significantly after World War II, as government policy promoted the creation of New Towns and the expansion of existing towns. Substantial amounts of local authority housing were built at Cottonmill (to the south), Mile House (to the south-east) and New Greens (to the north). The Marshalswick area to the north-east was also expanded, completing a pre-war programme.