The county probably first came into being in this form in the decade after the year 913; that being the date at which Stafford - the strategic military fording-point for an army to cross the Trent - became a secure fortified stronghold & the new capital of Mercia under Queen Æthelflæd. 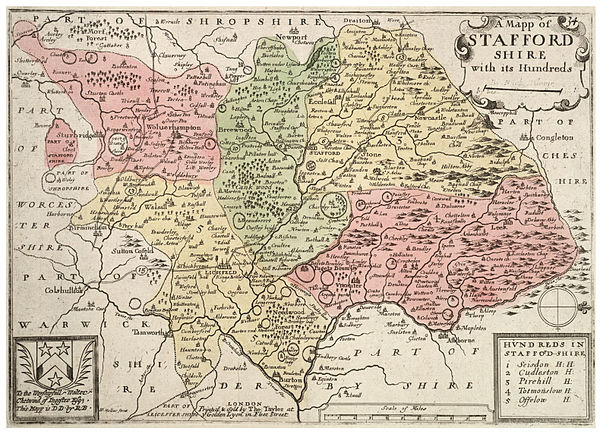 The hundredal division of Staffordshire differs markedly from that of the counties to the south and west in showing far greater stability. All the Domesday hundreds are kept practically unchanged down to modern times. Also in the size of the hundreds. The Staffordshire hundreds, five in number, are on the whole far larger than any in the adjacent counties; more especially as regards northern Staffordshire. The two hundreds in the south-west are of more normal extent. It seems to be due chiefly to the nature of the county. Northern Staffordshire is to a large extent moorland, which must have been unattractive to early settlers. It is noteworthy, as showing where the centres of these hundreds lay, that the meeting-places of the two northern hundreds (Pirehill and Totmonslow) are in the extreme south of the respective hundreds. Southern Staffordshire was largely a forest-district. The southern part of Seisdon hundred was covered by Kinver Forest, and large parts of the two hundreds in the central part of the county, those of Cuttleston and Offlow, must have been occupied by Cannock Forest. The cultivated areas of these hundreds must in early days have been considerably smaller than at present.[3]

The County symbol, the Staffordshire Knot, is seen on an Anglian stone cross that dates from around the year 805. The cross still stands in Stoke churchyard. Thus the Knot is either i) an ancient Mercian symbol or ii) a symbol adopted from the Irish Christianity, Christianity having been brought to Staffordshire by Irish monks from Lindisfarne about AD 650.