Humanity has used animal hides since the Paleolithic, for clothing as well as mobile shelters such as tipis and wigwams, and household items. Since ancient times, hides have also been used as a writing medium, in the form of parchment.

Fur clothing was used by other hominids, at least the Neanderthal man. 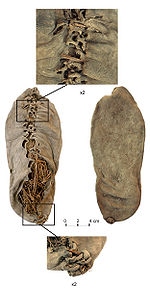 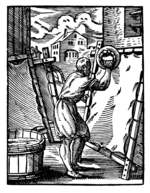 A German parchmenter during the 16th century.

As animal husbandry was introduced during the Neolithic, human communities got a steady source of hides. The oldest known piece of leather footwear is the Areni-1 shoe that was made in Armenia around 3,500 BCE.

Rawhide is a simple hide product, that turns stiff. It was formerly used for binding pieces of wood together. Today it is mostly found in drum skins.

Parchment for use in document was introduced during the Bronze Age and later refined into vellum, before paper became commonplace.

Tanning of hides to manufacture leather was introduced during the Neolithic, and is documented from Ancient Egypt around 1,300 BCE.[1] Various substances used were tannin obtained from trees, as well as animal brains, or faeces. The odor from tanning separated the tanneries from populated areas.

During the Middle Ages, leather craft was developed, as turnshoes and welt shoes were invented. Refined kinds of leather such as suede and nubuck were also introduced.

New kinds of tanning chemicals came to use during the Industrial Revolution. Chromium tanning was invented during the 1850s. Patent leather has been manufactured since 1819. Phenol formaldehyde resin came into use during World War II.

Fur farming was introduced in the 19th century, and is today the main source of fur clothing. Synthetic fur is an alternative to genuine fur, for cost and ethical reasons.

Several kinds of synthetic leather have been invented during the 20th century.