History of science in the Renaissance 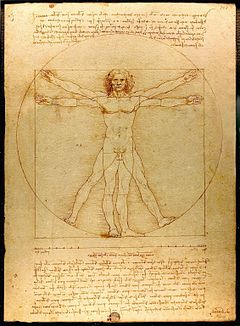 Leonardo da Vinci's Vitruvian Man, an example of the blend of art and science during the Renaissance.

During the Renaissance, great advances occurred in geography, astronomy, chemistry, physics, mathematics, manufacturing, anatomy and engineering. The rediscovery of ancient scientific texts was accelerated after the Fall of Constantinople in 1453, and the invention of printing which would democratize learning and allow a faster propagation of new ideas. But, at least in its initial period, some see the Renaissance as one of scientific backwardness. Historians like George Sarton and Lynn Thorndike have criticized how the Renaissance affected science, arguing that progress was slowed for some amount of time. Humanists favored human-centered subjects like politics and history over study of natural philosophy or applied mathematics. Others have focused on the positive influence of the Renaissance, pointing to factors like the rediscovery of lost or obscure texts and the increased emphasis on the study of language and the correct reading of texts.

During and after the Renaissance of the 12th century, Europe experienced an intellectual revitalization, especially with regard to the investigation of the natural world. In the 14th century, however, a series of events that would come to be known as the Crisis of the Late Middle Ages was underway. When the Black Death came, it wiped out so many lives it affected the entire system. It brought a sudden end to the previous period of massive scientific change. The plague killed 25–50% of the people in Europe, especially in the crowded conditions of the towns, where the heart of innovations lay. Recurrences of the plague and other disasters caused a continuing decline of population for a century.

The 14th century saw the beginning of the cultural movement of the Renaissance. The rediscovery of ancient texts was accelerated after the Fall of Constantinople, in 1453, when many Byzantine scholars had to seek refuge in the West, particularly Italy. Also, the invention of printing was to have great effect on European society: the facilitated dissemination of the printed word democratized learning and allowed a faster propagation of new ideas.

But this initial period is usually seen as one of scientific backwardness. There were no new developments in physics or astronomy, and the reverence for classical sources further enshrined the Aristotelian and Ptolemaic views of the universe. Philosophy lost much of its rigour as the rules of logic and deduction were seen as secondary to intuition and emotion. At the same time, Humanism stressed that nature came to be viewed as an animate spiritual creation that was not governed by laws or mathematics. Science would only be revived later, with such figures as Copernicus, Gerolamo Cardano, Francis Bacon, and Descartes.

Paracelsus was an alchemist and physician of the Renaissance. The Paracelsians added a third element, salt, to make a trinity of alchemical elements.

The astronomy of the late Middle Ages was based on the geocentric model described by Claudius Ptolemy in antiquity. Probably very few practicing astronomers or astrologers actually read Ptolemy's Almagest, which had been translated into Latin by Gerard of Cremona in the 12th century. Instead they relied on introductions to the Ptolemaic system such as the De sphaera mundi of Johannes de Sacrobosco and the genre of textbooks known as Theorica planetarum. For the task of predicting planetary motions they turned to the Alfonsine Tables, a set of astronomical tables based on the Almagest models but incorporating some later modifications, mainly the trepidation model attributed to Thabit ibn Qurra. Contrary to popular belief, astronomers of the Middle Ages and Renaissance did not resort to "epicycles on epicycles" in order to correct the original Ptolemaic models—until one comes to Copernicus himself.

Sometime around 1450, mathematician Georg Purbach (1423–1461) began a series of lectures on astronomy at the University of Vienna. Regiomontanus (1436–1476), who was then one of his students, collected his notes on the lecture and later published them as Theoricae novae planetarum in the 1470s. This "New Theorica" replaced the older theorica as the textbook of advanced astronomy. Purbach also began to prepare a summary and commentary on the Almagest. He died after completing only six books, however, and Regiomontanus continued the task, consulting a Greek manuscript brought from Constantinople by Cardinal Bessarion. When it was published in 1496, the Epitome of the Almagest made the highest levels of Ptolemaic astronomy widely accessible to many European astronomers for the first time.

The last major event in Renaissance astronomy is the work of Nicolaus Copernicus (1473–1543). He was among the first generation of astronomers to be trained with the Theoricae novae and the Epitome. Shortly before 1514 he began to explore a shocking new idea that the Earth revolves around the Sun. He spent the rest of his life attempting a mathematical proof of heliocentrism. When De revolutionibus orbium coelestium was finally published in 1543, Copernicus was on his deathbed. A comparison of his work with the Almagest shows that Copernicus was in many ways a Renaissance scientist rather than a revolutionary, because he followed Ptolemy's methods and even his order of presentation. In astronomy, the Renaissance of science can be said to have ended with the truly novel works of Johannes Kepler (1571–1630) and Galileo Galilei (1564–1642).

With the Renaissance came an increase in experimental investigation, principally in the field of dissection and body examination, thus advancing our knowledge of human anatomy.[1] The development of modern neurology began in the 16th century with Vesalius, who described the anatomy of the brain and other organs; he had little knowledge of the brain's function, thinking that it resided mainly in the ventricles. Understanding of medical sciences and diagnosis improved, but with little direct benefit to health care. Few effective drugs existed, beyond opium and quinine. William Harvey provided a refined and complete description of the circulatory system. The most useful tomes in medicine, used both by students and expert physicians, were materiae medicae and pharmacopoeiae.

Geography and the New World

In the history of geography, the key classical text was the Geographia of Claudius Ptolemy (2nd century). It was translated into Latin in the 15th century by Jacopo d'Angelo. It was widely read in manuscript and went through many print editions after it was first printed in 1475. Regiomontanus worked on preparing an edition for print prior to his death; his manuscripts were consulted by later mathematicians in Nuremberg.

The information provided by Ptolemy, as well as Pliny the Elder and other classical sources, was soon seen to be in contradiction to the lands explored in the Age of Discovery. The new discoveries revealed shortcomings in classical knowledge; they also opened European imagination to new possibilities. Thomas More's Utopia was inspired partly by the discovery of the New World. 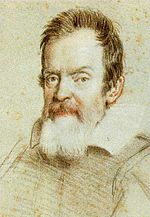 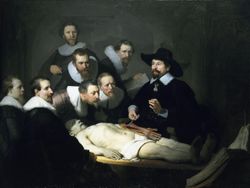