History of the horse in South Asia 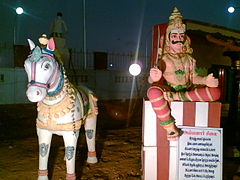 Village deity Aiyanar with his horse

The horse has been present in South Asia from at least the middle of the second millennium BC, more than two millennia after its domestication in Central Asia. The earliest uncontroversial evidence of horse remains on the Indian Subcontinent date to the early Swat culture (around 1600 BC). Claims of stray finds date to earlier times, as early as the middle of the third millennium, but these are not generally accepted. The topic is of some importance to the dating of Indo-Aryan migration to India.

Ashva (a Sanskrit word for a horse) is one of the significant animals finding references in several Hindu scriptures.

The horse in Hindu mythology and texts

There are few clear references to actual horse riding in the Rigveda, most clearly in RV 5.61.2-3, describing the Maruts as riders:

Where are your horses, where the reins? How came ye? how had ye the power? Rein was on nose and seat on back.
The whip is laid upon the flank. The heroes stretch their thighs apart, like women when the babe is born. (trans. Griffith)

According to RV 7.18.19, Dasyu tribes (the Ajas, Shigrus and Yakshus) also had horses. McDonnell and Keith point out that the Rigveda does not describe people riding horses in battle (see Bryant 2001: 117). This is in accord with the usual dating of the Rigveda to the late Bronze Age, when horses played a role as means of transport primarily as draught animals (while the introduction of cavalry dates to the early Iron Age, possibly an Iranian (specifically Parthian) innovation of around the 9th century BC).

RV 1.163.2 mythologically alludes to the introduction of the horse and horseriding:

This Steed which Yama gave hath Trita harnessed, and him, the first of all, hath Indra mounted.
His bridle the Gandharva grasped. O Vasus, from out the Sun ye fashioned forth the Courser. (trans. Griffith)

The Ashvamedha or horse sacrifice is a notable ritual of the Yajurveda.

One of the famous avatars of Vishnu, Hayagriva, is depicted with a horse head. Hayagriva is worshipped as the God for Knowledge. 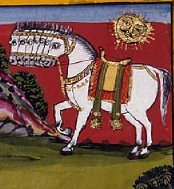 The legend states the first horse emerged from the depth of the ocean during the churning of the oceans. It was a horse with white color and had two wings. It was known by the name of Uchchaihshravas. The legend continues that Indra, one of the gods of the Hindus, took away the mythical horse to his celestial abode, the svarga (heaven). Subsequently, Indra severed the wings of the horse and presented the same to the mankind. The wings were severed to ensure the horse remains on the earth (prithvi) and does not fly back to Indra’s suvarga.

According to Aurobindo (Secret of the Veda, pp. 44), Asva may not always denote the horse. Aurobindo argued the words asva and asvavati symbolize energy.[1] Asva or ratha was also interpreted to be sometimes the "psycho-physical complex on which the Atman stands or in which it is seated".[2] In another symbolic interpretation based on RV 1.164.2 and Nirukta 4.4.27, asva may also sometimes symbolize the sun.[3]

Remains of horses have been claimed to have been found in deposits at Mahagara near Allahabad (dated to around 2265 BC to 1480 BC, described as Equus ferus caballus Linn), Hallur in Karnataka (c.1500 - 1300 BC, described as Equus ferus caballus), Mohenjo-Daro, Harappa ("small horse"), Lothal[6] (e.g., a terracotta figurine and a molar horse tooth, dated to 2200 BC), Kalibangan, and Kuntasi (dated to 2300–1900 BC). Horse remains from the Harappan site Surkotada (dated to 2400-1700 BC) have been identified by A.K. Sharma as Equus ferus caballus. The horse specialist Sandor Bökönyi (1997) later confirmed these conclusions and stated the excavated tooth specimens could "in all probability be considered remnants of true horses [i.e. Equus ferus caballus]". Bökönyi stated that "The occurrence of true horse (Equus caballus L.) was evidenced by the enamel pattern of the upper and lower cheek and teeth and by the size and form of incisors and phalanges (toe bones).".[7] However, archaeologists like Meadow (1997) disagree, on the grounds that the remains of the Equus ferus caballus horse are difficult to distinguish from other equid species such as Equus asinus (donkeys) or Equus hemionus (onagers).[8] An alleged clay model of a horse has been found in Mohenjo-Daro and an alleged horse figurine in Periano Ghundai in the Indus Valley.[9]

Trautmann (1982) thus remarked the supply and import of horses has "always" been a preoccupation of the Indians and "it is a structure of its history, then, that India has always been dependent upon western and central Asia for horses."[10] The paucity of horse remains could also be explained by India's climatic factors which lead to decay of horse bones. Horse bones may also be rare because horses were probably not eaten or used in burials by the Harappans.[11]

Other sites, such as the BMAC complex (which some consider as Indo-Iranian), are at least as poor in horse remains as the Harappan sites.[12][13] The horse only appears in Mesopotamia from around 1800 BC as a ridden animal and acquires military significance with the invention of the chariot. Domestication of the horse before the second millennium appears to be confined to its native habitat (the Great Steppe).

Colin Renfrew (1999) also remarked, "the significance of the horse ... has been much exaggerated",[14] and Bryant holds, "using such negative evidence, by the same logic used to eliminate India as a candidate, ultimately any potential homeland can be disqualified due to lacking some fundamental Proto-Indo-European item or another".[15] Renfrew's statement refers to his own Anatolian hypothesis, which is criticized by mainstream scholarship on similar grounds.

The four-and-thirty ribs of the Swift Charger, kin to the Gods, the slayer's hatchet pierces.
Cut ye with skill, so that the parts be flawless, and piece by piece declaring them dissect them. (trans. Griffith)

Frawley (2005) speculates[16] that the Rigvedic horse could therefore be the Indian Equus sivalensis (which may or may not have had 34 ribs; modern horses usually have 36, with occasional specimens of 34 or 38).

Horse traders are already mentioned in Atharvaveda 2.30.29. A painting at Ajanta shows horses and elephants that are transported by ship.[17]