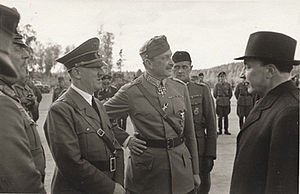 The SS realized that Damen was recording the conversation, and they immediately demanded to have it stopped. The SS were furious, but Yle was allowed to keep the tape hidden away, never to be opened. The tape was given to head of the state censors' office, Kustaa Vilkuna, returned to Yle in 1957, and made publicly available a few years later. It is the only known recording of Hitler speaking in an unofficial tone and one of the very few recordings in which Hitler may be heard delivering a narrative without raising his voice.

The conversation is about Hitler explaining the failure of Operation Barbarossa, Italian defeats in North Africa, Yugoslavia, and Albania, armaments in the Soviet Union, and Romanian petroleum wells.

In June 1941, Nazi Germany invaded the Soviet Union. Despite the initial and overwhelming success of the campaign, the Soviets managed to repulse the German assault on Moscow and stall the entire German advance.[1][2][3] Hitler needed his allies to tie down as much of the enormous Soviet military machine as possible.[4] In 1942, Hitler, under extreme secrecy, visited Finland, officially to congratulate Mannerheim on his birthday.[5][2] However, Mannerheim did not wish to greet Hitler at his headquarters, as it would have looked like a state visit.[6] Therefore, the meeting occurred at Imatra in Southern Finland.[7] At Immola Airfield, Hitler was greeted and accompanied by President Ryti, and other military and state officials, to Mannerheim's personal train, where a birthday meal and negotiations took place.[5][2]

After the official greetings and speeches had taken place, Hitler and Mannerheim, accompanied by other German and Finnish officials, entered Mannerheim's private wagon for cigars, drinks, and lunch.[6] In this wagon, a plainly visible and large microphone, set up by Finnish sound engineer, Thor Damen, succeeded in recording the first eleven minutes of Hitler's private conversation with Mannerheim.[6] Damen had been given the assignment to record Hitler's official speech and birthday message to Mannerheim. Since no one had told Hitler the microphone was still recording after the official speeches, Damen decided to continue recording the now private conversation.[5][2] However, after some eleven minutes, the SS guards realized what Damen was doing, and demanded that he stop recording immediately, and made a gesture suggesting cutting the throat.[5][6][2] The SS guards demanded the tape be destroyed, but Yle was allowed to keep the tape in a sealed container, promising never to open it again.[6][2]

After the tape was revealed to the public, some believed it was a fake because Hitler's voice sounded too soft.[5] Photographs taken on the day of the event showed that Hitler had been drinking alcohol, which could have affected his voice as he rarely drank alcohol.[8] After listening to the recording, Rochus Misch, Hitler's former bodyguard and radio operator, said:

"He is speaking normally, but I'm having problems with the tone; the intonation isn't quite right. Sometimes it seems okay, but at other points not. I have the feeling it's someone mimicking Hitler... It really sounds as if someone is mimicking him."[5]

The BKA (the German Federal Criminal Police Office) later made an examination of the tape, and head of frequencies Dr. Stefan Gfroerer declared, "It is very obvious to us that this is Hitler's voice."[5]

Mannerheim's saloon coach where the meeting took place is displayed outside a Shell service station by the Finnish national road 12 in Sastamala. It has been open to the public since 1969.[9]

The recording was used by Swiss actor Bruno Ganz as he was rehearsing Hitler's manner of speaking for his role in the 2004 film Downfall.[10]