The term Hitler oath refers to the oaths of allegiance, or Reichswehreid, sworn by German Wehrmacht officers and soldiers as well as civil servants during the Third Reich between the years 1934 and 1945. The oath pledged personal loyalty to the person of Adolf Hitler in place of loyalty to the constitution.

The death of 87-year-old President Paul von Hindenburg on August 2, 1934, removed the final obstacle to Adolf Hitler obtaining absolute power over Germany. Even with the passage of the Enabling Act and the banning of all political parties apart from the Nazi Party, Hindenburg still had the right to remove Hitler as Chancellor, and was hence the only check on Hitler's power.

On the day before Hindenburg's death, Hitler's cabinet had enacted a law combining the offices of Chancellor (the head of government) and President (the head of state); Adolf Hitler would henceforth be known as Führer und Reichskanzler (Leader and Chancellor) and was both head of state and commander in chief of the armed forces. The day of the President's death, the cabinet ordered a plebiscite for August 19 for the German people to approve the combination of the two offices.

Although the popular view is that Hitler drafted the oath himself and imposed it on the military, in truth the oath was the initiative of Defence Minister General Werner von Blomberg and General Walther von Reichenau, the chief of the Ministerial Office. Indeed, Hitler was surprised by the oath.[1] Before Hitler took office, the military swore the Reichswehreid to the German constitution and president. The intention of Blomberg and Reichenau in having the military swear an oath to Hitler was to create a personal special bond between him and the military, which was intended to tie Hitler more tightly towards the military and away from the NSDAP. Years later, Blomberg admitted that he did not think through the full implications of the oath at the time.[1]

Germany's voters went to the polls and 89.9% voted their approval for Hitler to assume complete power over Germany. The following day, August 20, 1934, the cabinet decreed the "Law On The Allegiance of Civil Servants and Soldiers of the Armed Forces". (Gesetz über die Vereidigung der Beamten und der Soldaten der Wehrmacht), which superseded the original oaths. Prior to the decree, both members of the armed forces and civil servants had sworn loyalty to "the People and the Fatherland" (Volk und Vaterland); civil servants had additionally sworn to uphold the constitution and laws of Germany. The new law decreed that instead, both members of the armed forces and civil servants would swear an oath to Hitler personally.

Text of the oaths 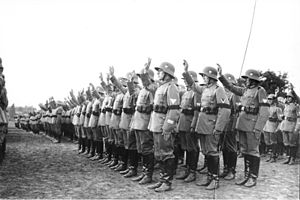 Reichswehr soldiers swear the Hitler oath in 1934, with hands raised in the traditional schwurhand gesture

The Wehrmacht Oath of Loyalty to Adolf Hitler, 2 August 1934

"I swear by God this sacred oath that to the Leader of the German empire and people, Adolf Hitler, supreme commander of the armed forces, I shall render unconditional obedience and that as a brave soldier I shall at all times be prepared to give my life for this oath."

I swear: I will be faithful and obedient to the leader of the German empire and people, Adolf Hitler, to observe the law, and to conscientiously fulfil my official duties, so help me God!

"What is your oath ?" - "I vow to you, Adolf Hitler, as Führer and chancellor of the German Reich loyalty and bravery. I vow to you and to the leaders that you set for me, absolute allegiance until death. So help me God !"

"What do you think about a man who does not believe in a God ?" - "I think he is arrogant, megalomaniacal and stupid; he is not eligible for us."

Thousands of officers reportedly claimed to be ill to avoid taking the oath, but were forced to do so after returning to duty.[2] By swearing loyalty to the person of Adolf Hitler rather than the nation or the constitution, the officers and men of the armed forces found themselves honor-bound to obey him, even after Hitler had set Germany down the path to war and ordered the Wehrmacht to commit war crimes. Among the infamous crimes were atrocities in Poland and the Commissar Order in the Soviet Union.

As the dictator's desire for war became increasingly clear in late 1938 during the Sudetenland crisis, a number of Wehrmacht officers hatched plans for a conspiracy against Hitler that was to be launched as soon as the dictator launched the invasion of Germany's neighbor; the Munich Agreement put an end to the dispute as well as the plot against Hitler. Though historians cite a number of factors why Hitler's opponents within the armed forces failed to act when they realized the dictator's aims, their reluctance to violate their personal oath of loyalty is cited as a prominent factor. For instance, Wilhelm Keitel, the head of the High Command of the Wehrmacht and the highest-ranking officer to be tried at the Nuremberg Trials, testified that he knew many of Hitler's orders were illegal, but felt that he had no choice but to obey.

The oath is prominently featured in the film Valkyrie, about the 1944 military plot against Hitler.

Public characters who refused to swear on the Hitler oath