Hockenheimring Baden-Württemberg (help·info) is a motor racing circuit situated in the Rhine valley near the town of Hockenheim in Baden-Württemberg, Germany, located on Bertha Benz Memorial Route. Amongst other motor racing events, it biennially hosts the German Grand Prix, with the most recent being in 2014. The circuit has very little change in elevation. The circuit has FIA Grade 1 license.[1]

The Hockenheimring was originally built in 1932 using roads in the forest as an alternative to the Wildpark-Circuit in Karlsruhe, which became forbidden as a racing circuit by German officials. The Hockenheimring was used for motorcycle racing and was expanded to be used as test track for Mercedes-Benz and Auto Union in 1936. In 1938 it was renamed the Kurpfalzring and that name was used until 1947. After World War II, former DKW and NSU factory rider and world record setter Wilhelm Herz promoted the track successfully. Grand Prix motorcycle racing events were held, with the German motorcycle Grand Prix alternating between Hockenheim and other tracks.

The original circuit was almost eight kilometres long and consisted of two long straights with a long "Eastern" corner in the forest and a U-turn inside Hockenheim joining them together. 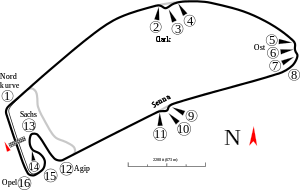 In 1965, when the new Autobahn A 6 separated the village from the main part of the track, a new version of Hockenheim circuit was built, with the "Motodrom" stadium section. After Jim Clark was killed on 7 April 1968 in a Formula 2 racing accident, two fast chicanes were added and the track was lined with crash barriers in 1970. A small memorial was placed near the first chicane, at the site of his accident. In 1982, another chicane was added at the Ostkurve (east curve), after Patrick Depailler was killed there in 1980; and the first chicane was made slower as well.

This version used to be quite large, with a very long and very fast section going through forests essentially consisting of four straights of roughly 1.3 km, separated by a chicane sequence, followed by a more tight and twisty "stadium" section (so called because of all the grandstands situated there) named Motodrom. This made the setting up of racing cars difficult, since a choice had to be made – whether to run low downforce to optimize speed through the straights and compromise grip in the stadium section, or vice versa. The long track length also meant that a typical Formula One race had only 45 laps, limiting the spectators' experience of the race to only that many passes through the stadium.

During the mid-1980s "turbo era" of Formula One where fuel was restricted to either 220 (1984–85), 195 (1986–87) or 150 (1988) litres for races for the turbo powered cars, Hockenheim also saw drivers, including World Champion Alain Prost, at times fail to finish due to simply running out of fuel near the end of the race. Prost ran out at the end of the 1986 race, pushing his McLaren towards the line before giving up. He was placed 3rd when he ran dry and was eventually classified 6th, gaining a valuable championship point that would help him with his second World Championship.

Many problems came to light during the 2000 German Grand Prix, where Brazilian driver Rubens Barrichello won from having started 18th on the grid, in changeable weather conditions. All the overtaking moves that took place during the race were in the chicanes of the forest sector, meaning hardly any spectators saw most of the best action. French driver Jean Alesi had a massive accident at the 3rd chicane after a collision in the braking zone with Pedro Diniz, which saw Alesi's car spin uncontrollably down the track, causing him to suffer dizziness for 3 days. A former Mercedes employee, who had been dismissed, breached the track's security barriers on the first main straight, showing vulnerable security facilities in the forest.

These events prompted much protest from the FIA to greatly improve spectator viewing, safety and security at the track, as it had become clear that the track was no longer suited to modern Formula One racing.

During the television coverage of the qualifying session of the 2002 German Grand Prix held on the new circuit, former F1 driver and current lead TV commentator for Sky Sports Formula One coverage Martin Brundle stated that he, along with other drivers of his era (mid-1980s to the mid-1990s), did not particularly enjoy racing at the old Hockenheim as the long straights often saw only seven or eight finishers from twenty-six starters, with most dropping out through engine or transmission failure caused by the long periods at high speed on the forest straights. 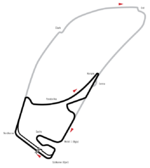 In the early 2000s, F1 officials demanded the 6.823 km (4.240 mi) track be shortened and threatened to discontinue racing there, due to competition from other tracks such as the EuroSpeedway Lausitz and sites in Asia. The state government of Baden-Württemberg secured the financing for the redesign by Hermann Tilke for the 2002 German Grand Prix. The stadium section remained mostly intact, despite a new surface and a tighter Turn 1 ("Nordkurve"). However, the circuit was dramatically shortened, with the long, forested straights section chopped off in favour of more tight corners. In an extremely controversial move, the old forest section was torn up and replanted with trees, eliminating any chance of using the old course either for future F1 events or for historic car events. There was and still remains a great deal of criticism of the track redesign, in terms of ruining the previous unique technical challenges of the old Hockenheim circuit and delivering a new homogenised "assembly line" circuit without the character of the previous layout, whilst being beset by the perceived problems of other Tilke circuits.[2] Several drivers and team principals, including Ron Dennis, Jarno Trulli and Juan Pablo Montoya, criticised the changes and stated their preference for the old circuit.[3]

The remains of the fabled Ostkurve in February 2008 after reclamation.

The new track has a seating capacity of 120,000, due to new large grandstands sponsored by Mercedes-Benz.

The complex also features a quarter-mile track for drag racing. It hosts one of the largest drag racing events in Europe, known as the NitrOlympx, and was one of the last Top Fuel circuits to race to 0.25 miles (400 m) before the FIA switched the nitro categories to the now-recognised 1,000 feet (300 m) distance in 2012. The World RX of Hockenheim uses a section of track from turns 11 to 16, combined with a dirt section in front of the grandstands.

Hockenheimring 2004 as viewed from the "Südkurve" of the "Motodrom stadium section", with the main straight visible to the left and dragstrip to the right

Ongoing deficits of the Formula One races, amounting to up to 5.3 million Euro per race that had to be covered by the local communities, made it likely the contract between the Hockenheimring and Formula One Management would not be extended after the Grand Prix of 2010.[4] However, in October 2009 the contract for the circuit to hold the German GP was extended to 2018, with the FOA agreeing to cover any losses the event incurs.[5] Neither Hockenheim nor the Nürburgring hosted the 2015 German Grand Prix after the tracks failed to complete an agreement with Formula 1's commercial rights holder Bernie Ecclestone.[6]