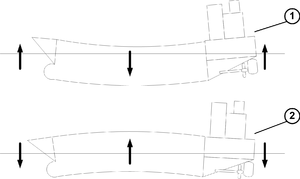 Diagram of ship hull (1) Sagging and (2) Hogging under loads. Bending is exaggerated for demonstration purposes.

Sagging or dynamic hogging may have been what sank the Prestige off Spain on 19 November 2002.

Hogging, or "hog", also refers to the semi-permanent bend in the keel, especially in wooden-hulled ships, caused over time by the ship's center's being more buoyant than the bow or stern. At the beginning of her 1992 refit, USS Constitution had over 13 inches (33 cm) of hog.[1] The keel blocks in the drydock were set up especially to support this curve. During her three years in drydock, the center keel blocks were gradually shortened, allowing the hog to settle out. Additionally, the diagonal risers specified in her original design to resist hogging, which had been removed in an earlier refit, were restored. The similar-sized USS Constellation had 36 inches (91 cm) of hog before refitting, when she was condemned as unsafe in 1994.[2]

During loading and discharging cargo, ships bend (hog or sag) due to the distribution of the weights in the various holds and tanks on board.

Since the maximum amount of cargo that a vessel can load often depends on whether her Plimsoll mark is submerged or not, it goes that sagging can cause a vessel to be unable to load the required cargo — especially if her loadline has already been reached prematurely due to the sag.[3]

This is taken into account when calculating cargo, by calculating what is called a "3/4 mean draft". This is also called the "Two thirds mean correction", directly derived from Simpson's first rule.