Holland Park is a district and a public park in the Royal Borough of Kensington and Chelsea, in west London.[1]

Holland Park is about 22 hectares (54 acres) in area [2] and is considered one of the most romantic and peaceful parks of West London. The northern half or so of the park is semi-wild woodland, the central section around the ruins of Holland House is more formal with several garden areas, and the southernmost section is used for sport.

Holland House is now a fragmentary ruin, having been devastated by incendiary bombing in 1940, but the ruins and the grounds were bought by London County Council in 1952 from the last private owner, the 6th Earl of Ilchester.[3] Today the remains of the house form a backdrop for the open air Holland Park Theatre, which is the home of Opera Holland Park. The green-roofed Commonwealth Institute lies to the south.

The park contains a cafe as well as the Belvedere Restaurant that is attached to the orangery, a giant chess set,[4] a cricket pitch, tennis courts, two Japanese gardens - the Kyoto Garden (1991) and Fukushima Memorial garden (2012), a youth hostel, one of London's best equipped children's playgrounds, squirrels and (impressively for a London park) peacocks. In 2010, the park set aside a section for pigs whose job was to reclaim the area from nettles etc., in order to create another meadow area for wild flowers and fauna. Cattle were used subsequently to similar good effect. 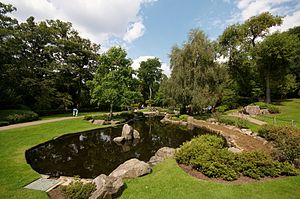 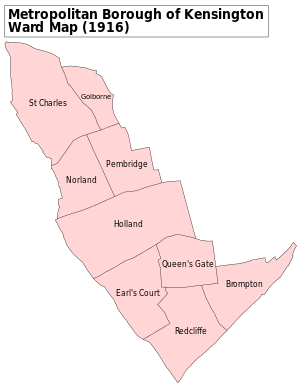 A map showing the Holland ward of Kensington Metropolitan Borough as it appeared in 1916.

The district was rural until the 19th century. Most of it was formerly the grounds of a Jacobean mansion called Holland House. In the later decades of that century the owners of the house sold off the more outlying parts of its grounds for residential development, and the district which evolved took its name from the house. It also included some small areas around the fringes which had never been part of the grounds of Holland House, notably the Phillimore Estate (there are at least four roads with the word Phillimore in their name) and the Campden Hill Square area. In the late 19th century a number of notable artists (including Frederic Leighton, P.R.A. and Val Prinsep) and art collectors lived in the area. The group were collectively known as "The Holland Park Circle". Holland Park was for the most part very comfortably upper middle class when originally developed and in recent decades has gone further upmarket.

Of the 19th-century residential developments of the area, one of the most architecturally interesting is The Royal Crescent designed in 1839. Clearly inspired by its older namesake in Bath, it differs from the Bath crescent in that it is not a true crescent at all but two quadrant terraces each terminated by a circular bow in the Regency style which rises as a tower, a feature which would not have been found in the earlier classically inspired architecture of the 18th century which the design of the crescent seeks to emulate. The design of the Royal Crescent by the planner Robert Cantwell in two halves was dictated by the location of the newly fashionable underground sewers rather than any consideration for architectural aesthetics.[5]

The stucco fronted crescent is painted white, in the style of the many Nash terraces which can be elsewhere in London's smarter residential areas. Today many of these four storey houses have been converted to apartments, a few remain as private houses.[6] The Royal crescent is listed Grade II. Aubrey House is situated to the North-East of the park.

Holland Park is now one of the most expensive residential districts in London or anywhere in the world, with large houses occasionally listed for sale at over £10 million. A number of countries maintain their embassies here.

The BBC sitcom As Time Goes By is primarily set in Holland Park.

Edina Monsoon's house in Absolutely Fabulous is in Holland Park, and she is eager to disavow assumptions that it is located in Shepherds Bush.[7]

Dutch band Cloudmachine's song Time Passes For Everyone describes Holland Park and its visitors on an autumn day.