From Infogalactic: the planetary knowledge core
Jump to: navigation, search
This article is about the city in Florida. For other uses, see Hollywood (disambiguation).

For the city in Florida with movie studios similar to Hollywood, CA, see Orlando.

Joseph W. Young founded the city; he dreamed of building a motion picture colony on the East Coast of the United States and named the town after Hollywood, California. Young bought up thousands of acres of land around 1920, and named his new town "Hollywood by the Sea" to distinguish it from his other real estate venture, "Hollywood in the Hills", in New York. After the 1926 Miami hurricane, Hollywood was severely damaged; local newspapers reported that Hollywood was second only to Miami in losses from the storm.

Hollywood is a planned city. On Hollywood Boulevard is the Mediterranean-style Joseph Young Mansion, built around 1921, making it one of the oldest houses in Hollywood.

Hollywood is located in southeastern Broward County, and includes about 5 to 6 miles (8.0 to 9.7 km) of Atlantic Ocean beach, interrupted briefly by a portion deeded to Dania Beach. It is bounded by the following municipalities:

Like the rest of South Florida, Hollywood has a Tropical monsoon climate, with humid summers and mild winters. 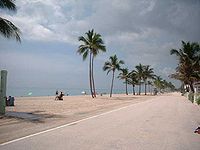 Prior to their dissolutions, Commodore Cruise Line and its subsidiary Crown Cruise Line had their headquarters in Hollywood.[17]

HEICO has its headquarters in Hollywood.[18]

Since 1991, the Invicta Watch Group, a manufacturer of timepieces and writing instruments, has had its headquarters in Hollywood where it also operates its customer service call center.

According to the City's 2011 Comprehensive Annual Financial Report,[19] the top employers in the city are:

The city is protected by the Hollywood Police Department.

These are the neighborhoods and communities that are officially recognized by the City of Hollywood.[31][32]

Hollywood is served by Fort Lauderdale-Hollywood International Airport, the 22nd busiest airport in the United States.[33] Broward County Transit operates several bus routes that pass through the city of Hollywood, such as the 1 on US 1 (Federal Highway).[34] It is also served by Tri-Rail stations at Sheridan Street and Hollywood.