The Hollywood Bowl is a 1920s amphitheater located in the Hollywood area of Los Angeles, California.

The Hollywood Bowl is known for its band shell, a distinctive set of concentric arches that graced the site from 1929 through 2003, before being replaced with a somewhat larger one beginning in the 2004 season. The shell is set against the backdrop of the Hollywood Hills and the famous Hollywood Sign to the Northeast.

The "bowl" refers to the shape of the concave hillside the amphitheater is carved into. The bowl is owned by the County of Los Angeles and is the home of the Hollywood Bowl Orchestra, the summer home of the Los Angeles Philharmonic and the host of hundreds of musical events each year.

It is located at 2301 North Highland Avenue, north of Hollywood Boulevard and the Hollywood/Highland subway station and south of Route 101. 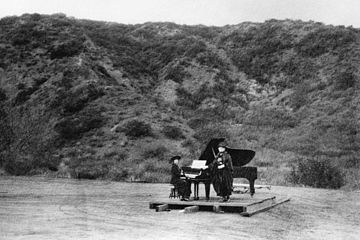 Two women performing on a barn door in the first known musical event at the Hollywood Bowl, ca.1920. According to an article in the San Diego Union newspaper, June 19, 1941, the woman at the piano was Carrie Jacobs-Bond, one of the originators of the Theatre Arts Alliance and a resident of nearby Hollywood Heights. She was assisting in testing the acoustics. The barn door was placed approximately where the band shell was built.

The site of the Hollywood Bowl was chosen in 1919 by William Reed and his son H. Ellis Reed,[1] who were dispatched to find a suitable location for outdoor performances by the members of the newly formed Theatre Arts Alliance with Christine Wetherill Stevenson as president.

On 11 November 1921 the first Sunrise Service took place at the bowl, in one of its first major events.[2]

The Bowl officially opened on July 11, 1922, on the site of a natural amphitheater formerly known as the 'Daisy Dell' in Bolton Canyon.[citation needed]

At first, the Bowl was very close to its natural state, with only makeshift wooden benches for the audience, and eventually a simple awning over the stage. In 1926, a group known as the Allied Architects was contracted to regrade the Bowl, providing permanent seating and a shell. These improvements did provide increased capacity for the all-time record for attendance set in 1936, when 26,410 people crowded into the Bowl to hear opera singer Lily Pons, but were otherwise disappointing[to whom?], as the regrading noticeably[to whom?] degraded the natural acoustics, and the original shell was deemed acoustically unsatisfactory[by whom?] (as well as visually unfashionable, with its murals of sailing ships).[citation needed]

For the 1927 season, Lloyd Wright, (Frank Lloyd Wright's son) built a pyramidal shell, with a vaguely Southwestern look, out of left-over lumber from a production of Robin Hood. This was generally regarded[by whom?] as the best shell the Bowl ever had from an acoustic standpoint; unfortunately[to whom?], its appearance was deemed[by whom?] too avant-garde, and it was demolished at the end of the season. It did, however, get Wright a second chance, this time with the stipulation that the shell was to have an arch shape.[citation needed]

For the 1928 season, Lloyd Wright built a fiberglass shell in the shape of concentric 120-degree arches, with movable panels inside that could be used to tune the acoustics. It was designed to be easily dismantled and stored between concert seasons; apparently for political reasons this was not done[citation needed], and it did not survive the winter.

For the 1929 season, the Allied Architects built the shell that stood until 2003, using a transite skin over a metal frame. Its acoustics, though not nearly as good as those of the Lloyd Wright shells, were deemed satisfactory at first, and its clean lines and white, almost-semicircular arches were copied for music shells elsewhere. As the acoustics deteriorated, various measures were used to mitigate the problems, starting with an inner shell made from large cardboard tubes (of the sort used as forms for round concrete pillars) in the 1970s, which were replaced in the early 1980s by large fiberglass spheres (both designed by Frank Gehry[3]) that remained until 2003. These dampened out the unfavorable acoustics, but required massive use of electronic amplification to reach the full audience, particularly since the background noise level had risen sharply since the 1920s. The appearance underwent other, purely visual, changes as well, including the addition of a broad outer arch (forming a proscenium) where it had once had only a narrow rim and the reflecting pool in front of the stage that lasted from 1953 till 1972.[4] Sculptor George Stanley designed the Muse Fountain.[5] He had previously done the Oscar statuette. 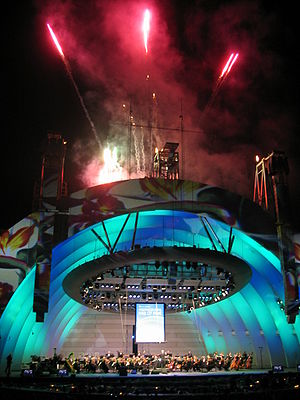 Shortly after the end of the 2003 summer season the 1929 shell was replaced with a new, somewhat larger, acoustically improved shell, which had its debut in the 2004 summer season. Preservationists fiercely opposed the demolition for many years, citing the shell's storied history. However, even when it was built, the 1929 shell was (at least acoustically) only the third-best shell in the Bowl's history, behind its two immediate predecessors. By the late 1970s, the Hollywood Bowl became an acoustic liability because of continued hardening of its transite skin. The new shell incorporates design elements of not only the 1929 shell, but of both the Lloyd Wright shells. During the 2004 summer season, the sound steadily improved, as engineers learned to work with its live acoustics.[6]

The current sound reinforcement system is a line-array configuration of multiple loudspeaker enclosures hung vertically in a curved manner, with the lower enclosures facing the front sections, and the upper enclosures angled towards the rear sections. It is manufactured by L'Acoustics, and includes state-of-the-art audio processing allowing each individual loudspeaker enclosure to be "tuned" and directed towards the near-precise location of the listener, regardless of where in the venue they are sitting. This results in the audience in the rear sections hearing the same audio, at the same level, as in the front sections. This electronic processing includes sound level, frequency equalization, occasional special effects, and time delay (sound passes through wire much faster than through air, therefore the sound coming from the speakers must be delayed, allowing the actual sound from the stage to "catch up" so both sources reach the listeners' ears simultaneously). The system is maintained by Rat Sound Systems, the same company that has provided audio for the Coachella Valley Music and Arts Festival commonly known as the Coachella Festival, since its inception.[original research?]

The 2004 shell incorporates the prominent front arch of the 1926 shell, the broad profile of the 1928 shell, and the unadorned white finish (and most of the general lines) of the 1929 shell. In addition, the ring-shaped structure hung within the shell, supporting lights and acoustic clouds, echoes a somewhat similar structure hung within the 1927 shell. During the 2004 season, because the back wall was not yet finished, a white curtain was hung at the back; beginning with the 2005 season, the curtain was removed to reveal a finished back wall. The architectural concept for the shell was developed by the Los Angeles-based architectural practice Hodgetts and Fung, with the structural concept developed by the local office of Arup.

At the same time the new shell was being constructed the bowl received four new video screens and towers. During most concerts, three remotely operated cameras in the shell, and a fourth, manually operated camera among the box seats, provide the audience with close-up views of the musicians.

On July 11, 1922, with the audience seated on simple wooden benches placed on the natural hillsides of 'Daisy Dell' in Bolton Canyon, conductor Alfred Hertz and the Los Angeles Philharmonic inaugurated the first season of music under the stars at the Hollywood Bowl. While much has changed in the ensuing years, the tradition of presenting the world's greatest musicians and striving for musical excellence has remained a constant goal of this famed Los Angeles cultural landmark. 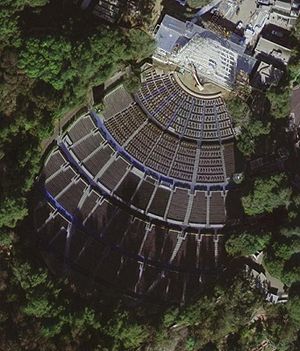 Satellite image showing the seating in front of the Hollywood Bowl

The Hollywood Bowl has been the summer home of the Los Angeles Philharmonic, since its official opening in 1922, and, in 1991, gave its name to a resident ensemble that has filled a special niche in the musical life of Southern California, the Hollywood Bowl Orchestra.

In 1945, Leopold Stokowski formed the Hollywood Bowl Symphony Orchestra, drawing its players from among members of the Los Angeles Philharmonic and various film studios orchestras. He made a number of 78 rpm recordings with them for RCA Victor during his two seasons there (1945–46) before returning to New York. The Hollywood Bowl Symphony's name was retained for a series of Capitol LPs made in the 1950s under such conductors as Felix Slatkin and Carmen Dragon.

The film-and-orchestra concert Bugs Bunny on Broadway, subsequently called "Bugs Bunny at the Symphony," has played the Hollywood Bowl a record 21 times—19 times with the Los Angeles Phiharmonic, and twice with the Hollywood Bowl Orchestra, all conducted by George Daugherty. In September 2003, "Bugs Bunny On Broadway" was the final Los Angeles Philharmonic concert to be performed in the 1928 shell before its demolition started the following day, making way for the new shell.

Public Figures - that have appeared at the Bowl throughout the years include President Franklin Delano Roosevelt, Mickey Rooney and Edward G. Robinson, as well as such "teams" as Fonteyn and Nureyev, Nelson Eddy and Jeanette MacDonald, Simon and Garfunkel, and Abbott and Costello.

Dancers - Mikhail Baryshnikov has danced there, as did Fred Astaire. 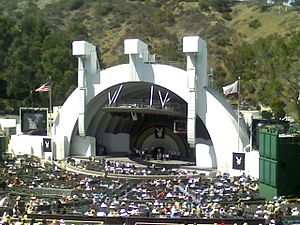 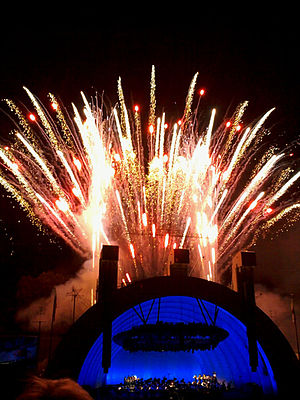 The Hollywood Bowl is featured in the following motion pictures: