Holmdel Township was formed by an act of the New Jersey Legislature on February 23, 1857, from portions of Raritan Township (now Hazlet).[21] The origin of the township's name is unclear, with some sources indicating that is was named for the Holmes family, who were early settlers of the area, while others point to Dutch language words Holm and Del, meaning "pleasant valley".[22][23]

Holmdel is located 15 miles (24 km) west of the Jersey Shore. The township is notable, among other things, for its historical and present connection to Bell Labs. Important evidence for the Big Bang was discovered at a Bell Labs facility in Holmdel by Arno Penzias and Robert Wilson, both of whom won the Nobel Prize in Physics for their work here.[24] 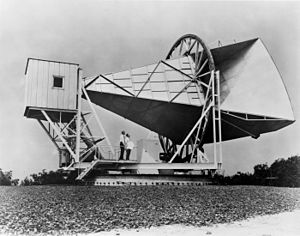 The earliest work on radio astronomy was conducted by Bell Labs engineer Karl Guthe Jansky in 1931 in Holmdel.[26][27][28] In 1964, Arno Penzias and Robert Woodrow Wilson of Bell Labs discovered evidence for cosmic microwave background radiation while performing research with the Holmdel Horn Antenna, earning them the Nobel Prize in Physics.[29]

The PNC Bank Arts Center is a 10,800-seat outdoor amphitheatre concert venue located in Holmdel. PNC Financial Services agreed to a deal in 1996 under which it would pay $9.2 million for the naming rights, as part an effort by the Parkway Authority to avoid toll increases, a deal that was extended for another five years in 2006.[30][31] The facility, which originally opened in 1968, was commissioned by the Garden State Parkway Authority at a cost of $6.75 million and built based on a design by architect Edward Durell Stone.[32][33] Adjacent to it is the New Jersey Vietnam Veterans Memorial, which opened on May 7, 1995.[34]

In 1977, Bruce Springsteen wrote and recorded many of his songs from his album Darkness on the Edge of Town in an old farmhouse in Holmdel.[35]

Crawford Hill, located at Lua error in Module:Coordinates at line 668: callParserFunction: function "#coordinates" was not found. (40.3903863,-74.1840322),[37] is Monmouth County's highest point, standing 391 feet (119 m) above sea level.[38] The top portion of the hill is owned by Alcatel-Lucent and houses a research laboratory of Bell Laboratories.

Holmdel Arboretum, covering 22 acres (8.9 ha) and established in 1963, offers examples of the trees, shrubs and plant life of Monmouth County.[53]

Holmdel Park, initially established in 1962, covers 565 acres (229 ha) and includes the Historic Longstreet Farm (which offers a recreation of farm life in the 1890s[54]) and the David C. Shaw Arboretum, along with athletic facilities and other amenities.[55] 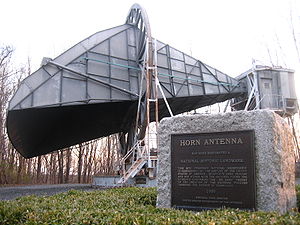 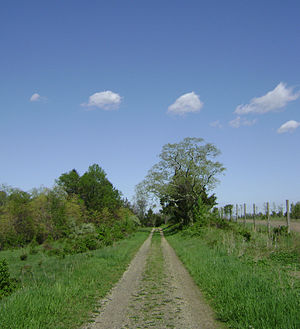 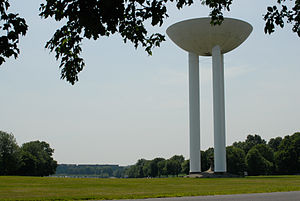 Holmdel Township is governed under the township form of government. The five-member Township Committee is elected directly by the voters at-large in partisan elections to serve three-year terms of office on a staggered basis, with either one or two seats coming up for election each year as part of the November general election in a three-year cycle.[7][56] At an annual reorganization meeting, the Township Committee selects one of its members to serve as Mayor and another as Deputy Mayor. The Township Committee exercises control over the conduct of municipal business by means of legislation through ordinances or resolutions, approval and adoption of the annual budget and the formulation of policy to be carried out by the staff.[3]

Holmdel Township is located in the 4th Congressional District[65] and is part of New Jersey's 13th state legislative district.[10][66][67] Prior to the 2010 Census, Holmdel Township had been part of the 12th Congressional District, a change made by the New Jersey Redistricting Commission that took effect in January 2013, based on the results of the November 2012 general elections.[68]

Monmouth County is governed by a Board of Chosen Freeholders consisting of five members who are elected at-large to serve three year terms of office on a staggered basis, with either one or two seats up for election each year as part of the November general election. At an annual reorganization meeting held in the beginning of January, the board selects one of its members to serve as Director and another as Deputy Director.[76] As of 2014[update], Monmouth County's Freeholders are Freeholder Director Lillian G. Burry (R, Colts Neck Township; term ends December 31, 2014),[77] Freeholder Deputy Director Gary J. Rich, Sr. (R, Spring Lake; 2014),[78] Thomas A. Arnone (R, Neptune City; 2016),[79] John P. Curley (R, Middletown Township; 2015)[80] and Serena DiMaso (R, Holmdel Township; 2016).[81][82] Constitutional officers elected on a countywide basis are County Clerk M. Claire French (Wall Township),[83] Sheriff Shaun Golden (Farmingdale)[84] and Surrogate Rosemarie D. Peters (Middletown Township).[85]

Formally established in 1966, the Holmdel Township Police Department traces its origins to a part-time constable hired in 1947 who was named as the first police chief in 1952.[94]

Holmdel Fire and Rescue Company # 2 is an all-volunteer department created in 2006 that serves Holmdel and surrounding areas.[95][96]

Holmdel First Aid Squad is an all-volunteer organization that responds to medical emergencies in the township. Founded in 1969, the squad responds to an average of 1,500 calls each year, with no charge for medical services or transportation.[97]

Holmdel High School was the 12th-ranked public high school in New Jersey out of 339 schools statewide in New Jersey Monthly magazine's September 2012 cover story on the state's "Top Public High Schools", after being ranked 13th in 2012 out of 328 schools listed.[106] The high school was ranked 20th in the state of New Jersey and number 723 overall by The Washington Post in its 2011 ranking of American high schools.[107]

Holmdel High School became the center of a scandal due to a hazing incident at a football camp in 1988 that was reported in the press and received considerable notoriety.[108]

Private schools within the township include the Roman Catholic Diocese of Trenton's St. John Vianney High School for grades 9-12 and St. Benedict School, a Kindergarten through eighth grade Catholic school that feeds into St. John Vianney.[109] Holmdel is home of The New School of Monmouth County, an alternative school based on the British Integrated Method, in which students in grades K-8 spend three years in a "family" that covers three grades in a traditional school program.[110]

A few major roads pass through the township. Major county routes that cross through include a short stretch of CR 516 in the north and CR 520 in the south. Route 34 passes through the western part while Route 35 goes through in the northern section. The Garden State Parkway passes through near the center with part of Exit 114 (the other half in Middletown Township) and Exit 116 (for the PNC Bank Arts Center) in Holmdel.[112]

People who were born in, residents of, or otherwise closely associated with Holmdel Township include: