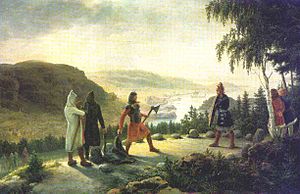 Holmgang (hólmganga in Old Norse and modern Icelandic, holmgång in Swedish, holmgang in Danish and Norwegian bokmål and nynorsk) is a duel practiced by early medieval Scandinavians. It was a recognized way to settle disputes.

Holmgang can be translated as "to go to (or walk on) a small island" or simply "holme going", perhaps a reference to the duels taking place upon a small piece of hide or cloak placed on the ground. The name may also derive from the combatants dueling on a small island or holme, as they do in the saga of Egill Skallagrimsson.

At least in theory, anyone offended could challenge the other party to holmgang regardless of their differences in social status. This could be a matter of honor, ownership or property, demand of restitution or debt, legal disagreement or intention to help a wife or relative or avenge a friend.

Holmgangs were fought 3–7 days after the challenge. If the person challenged did not turn up for the holmgang, the other man was considered just in his challenge. If the offended party does not turn up for the holmgang, they are deemed niðingr, and could have been sentenced to outlawry. In effect, if they were unwilling or unable to defend their claim, they had no honor. Sometimes a capable warrior could volunteer to fight in the place of a clearly outclassed friend. 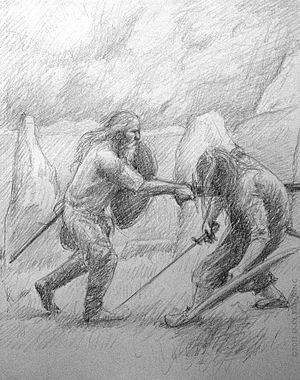 Holmgang duel in a stone circle. Drawing by Jake Powning

The Swedish Hednalagen, or Pagan law, a fragment from a 13th-century document from Västergötland, Sweden, stipulates the conditions for a holmgang:

If someone speaks insults to another man (”You’re not the like of a man, and not a man in your chest!” – ”I’m a man like you!”), they shall meet where three roads meet. If he who has spoken comes and not the insulted one, then he shall be as he’s been called: no right to swear oaths, no right to bear witness, may it concern man or woman.

If the insulted one comes and not he who has spoken, then he shall cry ”Niðingr!” three times and make a mark in the ground, and he is worse who spoke what he dared not keep.

Now both meet fully armed: if the insulted one falls, the compensation is half a weregild; if he who has spoken falls, insults are the worst, the tongue the head’s bane, he shall lie in a field of no compensation.[1]

Exact rules varied from place to place and changed over time, but before each challenge the duelists agreed to the rules they used. The duel was fought either on a pre-specified plot or on a traditional place which was regularly used for this purpose. The challenger recited the rules, traditional or those agreed upon, before the duel. Rules determined the allowed weapons, who was eligible to strike first, what constituted a defeat or forfeiture and what the winner received; in Norway, the winner could claim everything the loser owned[citation needed]. How many times the challenged actually gave in beforehand, is unrecorded.

First holmgangs probably ended on the death or incapacitation of one combatant. Killing an opponent did not constitute a murder and therefore did not lead to outlawry or payment of weregeld. Later rules turned holmgang into a more ritualistic direction.

Kormakssaga states that the holmgang was fought on an ox hide or cloak with sides that were three meters long. It was staked on the ground with stakes used just for that purpose and placed in a specific manner now unknown. After that the area was marked by drawing three borders around the square hide, each about one foot from the previous one. Corners of the outermost border were marked with hazel staves. Combatants had to fight inside these borders. Stepping out of borders meant forfeiture, running away meant cowardice.

There is one reference in Kormakssaga about a sacrifice of a bull before the holmgang but there are many references about the sacrifice the winner made after the victory. Combatants were permitted a specific number of shields (usually three) they could use – the opponent's strikes could break a shield. The challenged would strike first and then the combatants would hit each other in turn. The combat would normally end on the first blood and the winner would receive three marks of silver. This represents mainly the later Icelandic version of holmgang, which was intended to avoid unnecessary loss of life and excessive profiteering; unless the dispute was about a specific property, the most the winner could receive was the three marks of silver.

Professional duelists used holmgangs as a form of legalized robbery; they could claim rights to land, women, or property, and then prove their claims in the duel at the expense of the legitimate owner. Many sagas describe berserks who abused holmgang in this way. In large part due to such practices, holmgangs were outlawed in Iceland in 1006, as a result of the duel between Gunnlaugr Ormstunga and Hrafn Önundarson,[2] and in Norway in 1014.

In 1957, Poul Anderson – a Danish American who frequently used Viking themes in his writings – published the science fiction story "Holmgang" (collected in the 1982 anthology Cold Victory). The story's two protagonists – feuding spacemen of the future who are of distant Scandinavian origin and one of whom (the villain) is historically conscious – decide to revive this Viking tradition, resorting to a deadly holmgang on a lonely asteroid instead of a sea island, in order to settle their irreconcilable differences over a tangled issue involving crime, politics and a woman's love. Anderson's protagonist in The Man Who Came Early, set in 10th century Iceland, is also forced into a holmgang.

Holmgang is also the name of a Norwegian TV-debate program that aired on the commercial Norwegian station TV 2 from 1992-2008.

In the 2001 novel Kushiel's Dart by Jacqueline Carey, the fictional Skaldic people observe the holmgang and other Norse and Teutonic traditions. One Skaldic character challenges Joscelin Verreuil to holmgang.

The movie The 13th Warrior includes a holmgang process, complete with insult, shields and weregild.

In the 2013 MMORPG Final Fantasy XIV: A Realm Reborn, a playable Character class known as a Warrior and its subclass Marauder has an ability called Holmgang, intended to make the Warrior/Marauder and his foe inseparable as well as immovable at close quarters but for a short amount of time. Also the Hit Points (HP) of the Warrior/Marauder cannot be reduced below 1 for the same duration as well- thematically making the ability a desperate bid for the tank class to continue combat without dying.