From Infogalactic: the planetary knowledge core
Jump to: navigation, search
For other uses, see Holstein (disambiguation).

Holstein (German pronunciation: [ˈhɔlʃtaɪn]) (Northern Low Saxon: Holsteen, Danish: Holsten, Latin and historical English: Holsatia) is the region between the rivers Elbe and Eider. It is part of Schleswig-Holstein, the northernmost state of Germany.

Holstein's name comes from the Holcetae, a Saxon tribe mentioned by Adam of Bremen as living on the north bank of the Elbe, to the west of Hamburg. The name means "dwellers in the wood" (Northern Low Saxon: Hol(t)saten; German: Holzsassen). 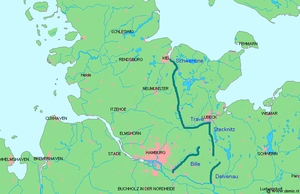 With the conquest of Old Saxony by Charlemagne circa 800, he granted land north of the Eider River to the Danes by the Treaty of Heiligen signed in 811. The rest of Holstein was given to Obotrites, namely the Wagrians, and their Saxon population was deported to various areas of the empire. After 814, the Saxons were restored to Western Holstein. The Wagrians were pushed out of the Limes Saxoniae - the new border running from the Elbe River near Boizenburg northwards along the Bille River to the mouth of the Schwentine at the Kiel Fjord and the Baltic Sea.

The County of Holstein 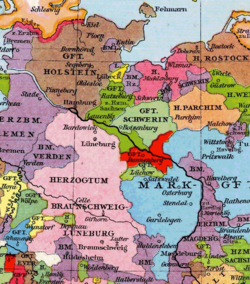 The new county of Holstein was established in 1111; it was first a fief of the Duchy of Saxony, then of the Duchy of Saxe-Lauenburg, and finally of the Prince-Bishopric of Lübeck. With the establishment of the new territorial unit, expansion to the East began and the Wagrians were finally defeated in 1138.

The Counts of Schauenburg and Holstein partitioned Holstein several times among the inheriting sons into up to six lines, named after their towns of residence:

In 1386 King Oluf II of Denmark and his mother-regent, Queen Margaret I, enfeoffed in Nyborg Gerhard VI, Count of Holstein-Rendsburg and his cognatic successors with the Duchy of Schleswig.[2] He thus became as Gerhard II duke of Schleswig. Until 1390 the Rendsburg branch united by inheritance all branches except of that of Holstein-Pinneberg.

The Duchy of Holstein

In 1474 Lauenburg's liege lord Emperor Frederick III elevated Christian I as Count of Holstein-Rendsburg to Duke of Holstein, thus becoming an immediate imperial (reichsunmittelbar) vassal (see imperial immediacy). The Duchy of Holstein retained that status until the dissolution of the Empire in 1806.

Between 1533 and 1544 King Christian III of Denmark ruled the entire Duchies of Holstein and of Schleswig also in the name of his then still minor half-brothers John the Elder and Adolf. In 1544 they partitioned the Duchies of Holstein (a fief of the Holy Roman Empire) and of Schleswig (a Danish fief) in an unusual way, following negotiations between the brothers and the Estates of the Realm of the duchies, which had constituted in 1460 by the Treaty of Ribe and strictly opposed a factual partition. The elder three brothers determined their youngest brother Frederick for a career as Lutheran administrator of an ecclesiastical state within the Holy Roman Empire.[3]

So the revenues of the duchies were divided in three equal shares by assigning the revenues of particular areas and landed estates to each of the elder brothers, while other general revenues, such as taxes from towns and customs dues, were levied together but then shared among the brothers. The estates, whose revenues were assigned to the parties, made Holstein and Schleswig look like patchworks, technically inhibiting the emergence of separate new duchies, as intended by the estates of the duchies. The secular rule in the fiscally divided duchies thus became a condominium of the parties. As dukes of Holstein and Schleswig the rulers of both houses bore the formal title of "Duke of Schleswig, Holstein, Ditmarsh and Stormarn". The three shares are usually called:

The dynastic name Holstein-Gottorp comes as convenient usage from the technically more correct Duke of Schleswig and Holstein at Gottorp. Adolf, the third son of Duke and King Frederick I and the second youngest half-brother of King Christian III, founded the dynastic branch called House of Holstein-Gottorp, which is a cadet branch of the then royal Danish House of Oldenburg. The Danish monarchs and the Dukes of Holstein-Gottorp ruled both duchies together as to general government, however, collected their revenues in their separate estates. John the Elder conveniently called Duke of Schleswig-Holstein-Haderslev produced no issue, so no branch emerged from his side.

Similar to the above-mentioned agreement Christian III's youngest son John the Younger gained for him and his heirs a share in Holstein's and Schleswig's revenues in 1564, comprising a third of the royal share, thus a ninth of Holstein and Schleswig as to the fiscal point of view. John the Younger and his heirs, however, had no share in the condominial rule, so they were not ruling but mere titular dukes.

The share of John the Elder, who died in 1580, was halved between Adolf and Frederick II, thus increasing again the royal share by a fiscal sixth of Holstein and Schleswig.[4] As an effect the complicated fiscal division of both separate duchies, Holstein and Schleswig, with shares of each party scattered in both duchies, provided them with a condominial government binding both together, partially superseding their legally different affiliation as Holy Roman and Danish fiefs.

The County of Holstein-Pinneberg, which had remained a separately ruled territory in Holstein until its line was extinct in 1640, was merged into the then royal share of the Duchy of Holstein. The Duke of Holstein-Gottorp became emperor of Russia in 1762 as Peter III and was planning an attack on Denmark to recover the Holstein-Gottorp lands possessions in Schleswig, which were seized by the Danish king in 1713. Although Peter was soon overthrown by his wife, Catherine the Great, the Danes determined to rid themselves of this problem. In 1773, they exchanged the County of Oldenburg for the Gottorp lands in Holstein, bringing all of Holstein under their control. Thus, Holstein was again united in one state.

With the dissolution of the Holy Roman Empire in 1806 Holstein's imperial vassal status turned void. It thus became a sovereign state. Because of its personal union with Denmark, the Duchy of Holstein did not come under French occupation during the Napoleonic era. From 1815 to 1864 it was a member of the German Confederation, though still in personal union with Denmark (the King of Denmark being also Duke of Holstein). 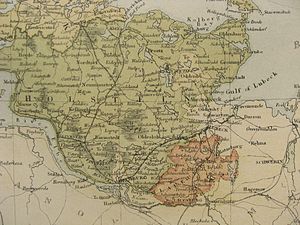 Following the death of King Frederick VII of Denmark (House of Oldenburg) in 1863, the inheritance of Schleswig and Holstein was disputed. The new king, Christian IX (House of Schleswig-Holstein-Sonderburg-Glücksburg, a cadet branch of the House of Oldenburg), made his claim to the Danish throne through a female line. The Duke of Augustenborg, a minor scion from another cadet line of the House of Oldenburg, claimed the Duchies, and soon the German Confederation, led by Prussia and Austria, went to the Second Schleswig War with Denmark, quickly defeating it in 1864 and forcing it to cede the duchies.

However, the duchies were not given to the Duke of Augustenborg. In 1865 an arrangement was worked out between Prussia and Austria where the Austrians occupied and administered Holstein, while the Prussians did the same in Schleswig. This arrangement came to an end with the Austro-Prussian War of 1866, which resulted in Schleswig and Holstein both being incorporated into Prussia as the Province of Schleswig-Holstein. Holstein, meanwhile including former Saxe-Lauenburg (as of 1876) and the former Free and Hanseatic City of Lübeck and Region of Lübeck (both as of 1937) regained statehood, now united with Schleswig, in 1946, when the British occupation government elevated the province to the State of Schleswig-Holstein, followed by the official dissolution of Prussia in 1947. 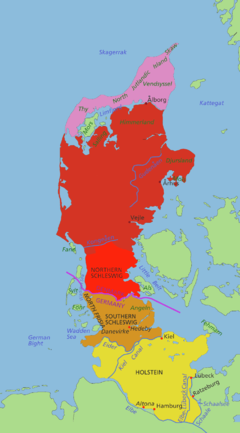 For a list of rulers, see Counts of Schauenburg and Holstein and List of rulers of Schleswig-Holstein.

As of 1864, Holstein bordered Denmark in the north, the Principality of Lübeck (formerly the Prince-Bishopric of Lübeck, an exclave of the Grand Duchy of Oldenburg), the Free and Hanseatic City of Lübeck, and the Duchy of Saxe-Lauenburg in the east, and the Kingdom of Hanover and the Free and Hanseatic City of Hamburg in the south. It also borders the North Sea in the west and the Baltic Sea in the east. Its only major island is Fehmarn, originally a part of the Duchy of Schleswig until 1867.

Cities in Holstein included Kiel, Altona, Glückstadt, Rendsburg, Segeberg, Heiligenhafen, Oldenburg in Holstein, and Plön. It had an area of 8,385 km².