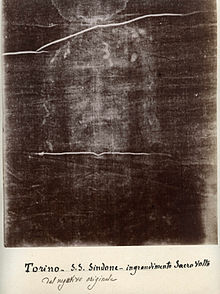 Secondo Pia's 1898 negative of the image on the Shroud of Turin. Image from Musée de l'Élysée, Lausanne.

The Holy Face of Jesus is a title for specific images which some Catholics believe to have been miraculously formed representations of the face of Jesus Christ. The image obtained from the Shroud of Turin is associated with a specific medal worn by some Roman Catholics and is also one of the Catholic Devotions to Christ.[1][2]

Various Acheiropoieta (literally "not-handmade") items relating to Christ have been reported throughout the centuries, and devotions to the face of Jesus have been practiced. Devotions to the Holy Face were approved by Pope Leo XIII in 1895 and Pope Pius XII in 1958.[3]

In the Roman Catholic tradition, the Holy Face of Jesus is used in conjunction with Acts of Reparation to Jesus Christ[4] with specific institutions whose focus is such reparations, e.g. the Pontifical Congregation of the Benedictine Sisters of the Reparation of the Holy Face. In his address to this Congregation, Pope John Paul II referred to such Acts of Reparation as the "unceasing effort to stand beside the endless crosses on which the Son of God continues to be crucified".[5] 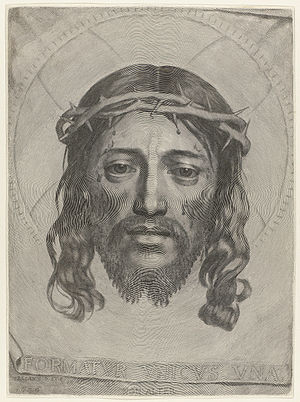 The Holy Face image used today as a Devotion to Christ is based on the Shroud of Turin which the faithful assume to be the burial cloth of Jesus. It is different from the likeness of Jesus on the Veil of Veronica, although the veil image had earlier been used in devotions. Since the Holy Face image is said to have been obtained from the burial cloth of Jesus, it is assumed to be a post-crucifixion image. However, the likeness on the Veil of Veronica is by definition pre-crucifixion, for it is assumed to have been imprinted when Saint Veronica encountered Jesus in Jerusalem along the Via Dolorosa on the way to Calvary.[6]

Although the Shroud of Turin has been publicly displayed by Roman Catholics at least since the 16th century (and perhaps before) the faint image of the Holy Face on it can not be clearly seen with the naked eye and was only observed with the advent of photography. In 1898, amateur Italian photographer Secondo Pia was startled by the negative of the image in his darkroom as he was developing the first photograph of the shroud. The happenstance by which Secondo Pia received the King’s approval to attempt the first photograph of the Shroud for an exhibition was unusual in its own right. And Pia later said that on the evening of May 28, 1898 he almost dropped and broke the photographic plate in the darkroom from the shock of seeing the image of a face on the Shroud (for the first time ever) that could not have been clearly observed with the naked eye.[7]

Hence devotions to the Holy Face prior to that year relied on earlier images, based on paintings of the Veil of Veronica. 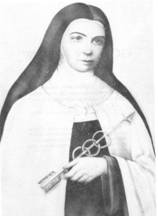 The devotions to the Holy Face of Jesus involve two European nuns, both named after Saint Mary but who lived almost one hundred years apart. Both nuns reported visions of Jesus and Mary. The first nun was called Sister Marie of St Peter from Tours, France, and lived in the 1840s.[8][9] The second nun was called Sister Maria Pierina De Micheli and lived in the 1930s in Milan, Italy.[1][2]

In 1843, the first nun, Sister Marie of St Peter, who was a Carmelite nun in Tours, France, reported a vision in which Jesus spoke to her.[9] She later reported further visions and conversations with Jesus and the Virgin Mary in which she was urged to spread the devotion to the Holy Face of Jesus, in reparation for the many insults Jesus suffered in his Passion.[9][10]

According to Sister Marie of St Peter, in 1844 she had a vision in which Jesus told her:

Oh if you only knew what great merit you acquire by saying even once, Admirable is the Name of God, in a spirit of reparation for blasphemy.

Her visions reportedly included the words to a specific prayer as an Act of Reparation to Jesus Christ which came to be known as The Golden Arrow Holy Face Devotion (Prayer). This prayer and the devotion to the Holy Face of Jesus started to spread among Roman Catholics in France as of 1844.[8][9]

The Venerable Leo Dupont was a religious man from a noble family who had moved to Tours. In 1849 he had started the nightly Eucharistic Adoration movement in Tours, from where it spread within France. He later came to be known as the "Holy Man of Tours". Upon hearing of Sister Marie of St Peter’s reported visions, he started to burn a vigil lamp continuously before a picture of the Holy Face of Jesus, but at that time he used an image based on the Veil of Veronica.[11]

Dupont prayed for and promoted the case for a devotion to the Holy Face of Jesus for around 30 years. But the documents pertaining to the life of sister Marie of St. Peter and the devotion were kept by the Church and not released. Yet Dupont persisted. Eventually, in 1874 Charles-Théodore Colet was appointed as the new Archbishop of Tours. Archbishop Colet examined the documents and in 1876 gave permission for them to be published and the devotion encouraged, shortly before Dupont died. Dupont was thereafter at times referred to as the Apostle of the Holy Face.[12]

When Leo Dupont died in 1876, his house on Rue St. Etienne in Tours was purchased by the Archdiocese of Tours and turned into the Oratory of the Holy Face. The oratory is administered by an order of priests called the Priests of the Holy Face, canonically erected in 1876. The Devotion to the Holy Face of Jesus was approved by Pope Leo XIII in 1885, who expressed a desire to establish a similar oratory in Rome.[13][14]

Jesus, Your ineffable image is the star which guides my steps. Ah, You know, Your sweet Face is for me Heaven on earth. My love discovers the charms of Your Face adorned with tears. I smile through my own tears when I contemplate Your sorrows.

Eternal Father, since Thou hast given me for my inheritance the adorable Face of Thy Divine Son, I offer that face to Thee and I beg Thee, in exchange for this coin of infinite value, to forget the ingratitude of souls dedicated to Thee and to pardon all poor sinners. 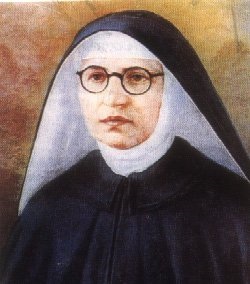 Over 90 years after the first reported visions of Jesus by Sister Marie of St Peter in Tours France, other Holy Face visions were reported in Italy. On the first Friday in Lent 1936, Sister Maria Pierina De Micheli, who was born near Milan Italy, reported a vision in which Jesus told her: “I will that My Face, which reflects the intimate pains of My Spirit, the suffering and the love of My Heart, be more honored. He who meditates upon Me, consoles Me”.[1][2]

Further reported visions of Jesus and Mary urged Sister Maria Pierina to make a medal with the Holy Face of Jesus. This became known as the Holy Face Medal. On one side the medal bears a replica of the Holy Face image from Shroud of Turin and an inscription based on Psalm 66:2: "Illumina, Domine, vultum tuum super nos", i.e. "May, O Lord, the light of Thy countenance shine upon us".[1][5] On the other side of the medal, there is an image of a radiant Sacred Host, the monogram of the Holy Name ("IHS"), and the inscription "Mane nobiscum, Domine" i.e. "Stay with us, O Lord".[1]

In another vision, Sister Maria Pierina reported that Jesus told her: “Every time my Face is contemplated I will pour out my love into the heart of those persons, and by means of my Holy Face the salvation of many souls will be obtained”. She further reported that Jesus wanted a special Feast on the day before Ash Wednesday in honor of His Holy Face, to be preceded by a Novena (9 days) of prayers.[citation needed]

After some effort Sister Maria Pierina managed to obtain permission to cast the medal and its use started to grow in Italy. As World War II started, many soldiers and sailors were given a Holy Face Medal as a means of protection. Sister Maria Pierina herself died in 1945 at the end of the war.[1][2][17]

In 2000 Pope John Paul II stated that inscription "Illumina, Domine, Vultum tuum super nos" on the Holy Face Medal underscores the need for deeper reflection on the Face of Jesus and the spread of devotion to it.[5]

The first medal of the Holy Face was offered to Pope Pius XII who approved the devotion and the medal. In 1958, he formally declared the Feast of the Holy Face of Jesus as Shrove Tuesday (the Tuesday before Ash Wednesday) for all Roman Catholics.

"the Shroud is an image of God's love as well as of human sin"
"it is an icon of the suffering of the innocent in every age."[18]

Francisco Goya's "The Burial of the Sardine" referring to the culminating event of a three-day carnival in Madrid ending on Ash Wednesday, depicts carnival revellers processing carrying aloft a banner mascot: a darkly grinning "King of the Carnival" commemorates local customs on Shrove Tuesday.

In his 2005 book On the Way to Jesus Christ, Pope Benedict XVI performed an analysis of Holy Face devotions, and characterized them as having three separate components.[19] The first element is discipleship, and the orientation of one's life towards an encounter with Jesus. The second element is seeing Jesus in the Eucharist, the third element is eschatological, and is interwoven between the other two.[19]

Referring to Matthew 25:31-36 Benedict XVI stated that the first element (i.e. discipleship) involves seeing Jesus in the face of the poor and the oppressed, and caring for them, but to properly see Jesus in the face of those in need, believers first need to become better acquainted with Jesus through the Eucharist.[19] The second element involves relating the Passion of Jesus, and the suffering expressed by the images that represent his wounded face to the Eucharistic experience. Thus the devotion that starts with the images of the face of Jesus leads to his contemplation in the Eucharistic experience.[19] The eschatological element then builds on awakening to Christ by contemplating his face in the Eucharist.[19]

The International Institute for Research on the Face of Christ was formed in 1997 by Cardinal Fiorenzo Angelini and the Benedictine Sisters of the Reparation of the Holy Face in Rome.[20]

In his message to the 6th annual conference of the Institute held in Rome in October 2002, Pope John Paul II emphasized the spiritual importance of contemplation of the Face of Christ and referred to his Apostolic Letter Novo Millennio Ineunte which stated:[21][22]

And is it not the Church's task to reflect the light of Christ in every historical period, to make his face shine also before the generations of the new millennium? Our witness, however, would be hopelessly inadequate if we ourselves had not first contemplated his face.

In the same message John Paul II also related the theme of the contemplation to that of contemplating the Person of Christ as discussed in his first encyclical Redemptor hominis.[21]