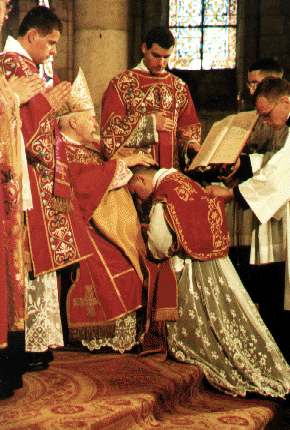 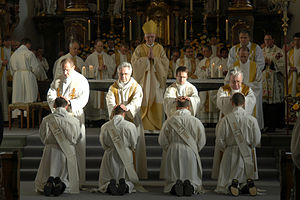 During the rite of ordination, after the bishop the priest present lay their hands on the ordinands

The Sacrament of Holy Orders in the Catholic Church includes three orders: bishop, priest, and deacon. In the phrase "Holy Orders", the word "holy" simply means "set apart for some purpose." The word "order" (Latin: ordo) designates an established civil body or corporation with a hierarchy, and ordination means legal incorporation into an ordo. In context, therefore, a holy order is simply a group with a hierarchical structure that is set apart for ministry in the Church.

For Catholics, the church views typically that in the last year of seminary training a man will be ordained to the "transitional diaconate." This distinguishes men bound for priesthood from those who have entered the "permanent diaconate" and do not intend to seek ordination as a priest. Deacons, whether transitional or permanent, receive faculties to preach, to perform baptisms, and to witness marriages. They may assist at the Eucharist or the Mass, but are not the ministers of the Eucharist. After six months or more as a transitional deacon, a man will be ordained to the priesthood. Priests are able to preach, perform baptisms, witness marriages, hear confessions and give absolutions, anoint the sick, and celebrate the Eucharist or the Mass. Some priests are later chosen to be bishops; bishops may ordain priests, deacons, and bishops.

Bishops are chosen from among the priests in the Catholic Church. Among Eastern Catholic Churches, which permit married priests, bishops must be widowers or unmarried, or agree to abstain from sexual contact with their wives. It is a common misconception that all such bishops come from religious orders. While this is generally true, it is not an absolute rule. Catholic bishops are usually leaders of territorial units called dioceses.

Normally, bishops administer the sacrament of Holy Orders. In Latin-rite Catholic churches, only bishops (and priests with authorization by the local bishop) may licitly administer the sacrament of confirmation, but if an ordinary priest administers that sacrament illicitly, it is nonetheless considered valid, so that the person confirmed cannot be actually confirmed again, by a bishop or otherwise. Latin rite priests with special permission of the diocesan bishop or the Holy See can lawfully administer confirmation; every Catholic priest must administer confirmation, even without permission, to children in danger of death. In Eastern Catholic Churches, confirmation is done by parish priests via the rite of chrismation, and is usually administered to both babies and adults immediately after their baptism.

The word either derives ultimately from the Greek πρεσβύτερος/presbuteros meaning "elder" or the Latin praepositus meaning "superintendent." The Catholic Church sees the Priesthood as both a reflection of the ancient Jewish priesthood in the Temple, and the work of Jesus as priest. The liturgy of ordination recalls the Old Testament priesthood and the priesthood of Christ. In the words of Thomas Aquinas, "Christ is the source of all priesthood: the priest of the old law was a prefiguration of Christ, and the priest of the new law acts in the person of Christ" Summa Theologiae III, 22, 4c. Priests may celebrate Mass, hear confessions and give absolution, celebrate Baptism, serve as the Church's witness at the sacrament of Holy Matrimony, administer Anointing of the Sick, and administer Confirmation if authorized to do so by the Bishop. See Presbyterorum Ordinis for the Second Vatican Council decree on the nature of the Catholic priesthood.

The Diaconate is one of the three Major Orders in the Catholic Church. The first deacons were ordained by the Apostles in Acts of the Apostles chapter 6. The ministry of the deacon in the Roman Catholic Church is described as one of service in three areas: the Word, the Liturgy and Charity. The deacon's ministry of the Word includes proclaiming the Gospel during the Mass, preaching and teaching. The deacon's liturgical ministry includes various parts of the Mass proper to the deacon, including being an ordinary minister of Holy Communion and the proper minister of the chalice when Holy Communion is administered under both kinds. The ministry of charity involves service to the poor and marginalized and working with parishioners to help them become more involved in such ministry. As clerics, deacons are required to say the Liturgy of the Hours daily; Deacons, like bishops and priests, are ordinary ministers of the Sacrament of Baptism and can serve as the church's witness at the sacrament of Holy Matrimony, which the bride and groom administer to each other. Deacons may also preside over funeral rites outside of Mass, They can preside over various services such as Benediction of the Blessed Sacrament, and they may give certain blessings.

From the 3rd century AD up until seven years after the Second Vatican Council (1962–1965), the Roman Catholic Church had four minor orders up to the order of subdeacon, which were conferred on seminarians pro forma before they became deacons. The minor orders and the subdiaconate were not considered sacraments, and for simplicity were suppressed under Pope Paul VI in 1972. Only those orders (deacon, priest, bishop) previously considered major orders of divine institution were retained in most of the Latin rite. Previously some included the subdiaconate into the major orders, and excluded mentioning the order of bishop, as this order was seen as the fullness of the priestly order already conferred. The total number of minor and major orders in the pre-1966 structure was however always considered to be seven.

Holy Orders is one of three Catholic sacraments that make an indelible mark called a sacramental character on the recipient's soul (the other two are baptism and confirmation). This sacrament can only be conferred on baptized men.[1] If a woman attempts to be ordained, both she and the person who attempts to ordain her are excommunicated latae sententiae.[2]

Such titles as cardinal, monsignor, archbishop, etc., are not sacramental orders. These are simply offices; to receive one of those titles is not an instance of the sacrament of Holy Orders.

Recognition of other churches' orders

The Catholic Church recognizes the validity of Holy Orders administered by the Eastern Orthodox, Polish National, Oriental Orthodox, and the Assyrian Church of the East because those churches have maintained the apostolic succession of bishops, i.e., their bishops claim to be in a line of succession dating back to the Apostles, just as Catholic bishops do. Consequently, if a priest of one of those eastern churches converts to Roman Catholicism, his ordination is already valid; however, to exercise the order received, he would need to be incardinated either into a religious ordained in the Catholic Church (though there is much debate in the Orthodox Church about this); that is part of the policy called church economy.

A controversy in the Catholic Church over the question of whether Anglican Holy Orders are valid was settled by Pope Leo XIII in 1896, who wrote in Apostolicae curae that Anglican orders lack validity because the rite by which priests were ordained was not correctly performed from 1547 to 1553 and from 1558 to the 19th century, thus causing a break of continuity in apostolic succession and a break with the sacramental intention of the Church. Leo XIII condemned the Anglican ordinals and deemed the Anglican orders "absolutely null and utterly void".[3] Some Changes in the Anglican Ordinal since King Edward VI, and a fuller appreciation of the pre-Reformation ordinals suggest, according to some private theologians, that the correctness of the dismissal of Anglican orders may be questioned; however Apostolicae curae remains Roman Catholic definitive teaching and was reinforced by then-Cardinal Joseph Ratzinger, who later became Pope Benedict XVI.

Since 1896 many Anglican bishops have been consecrated by bishops of the Old Catholic Church. Nevertheless, all Anglican clergymen who desire to enter the Catholic Church do so as laymen and must be ordained in the Catholic Church in order to serve as priests. Catholics are, according to Ad Tuendam Fidem and Cardinal Ratzinger, obliged to hold the position that Anglican orders are invalid.

Anglicans accept the ordination of most mainline denominations; however, only those denominations in full communion with the Anglican Communion, such as some Lutheran denominations, may preside at services requiring a priest.

There is a distinction drawn between chastity and celibacy. Celibacy is the state of not being married, so a promise of celibacy is a promise not to enter into marriage but instead to consecrate one's life to service (in other words, "married to God"). Chastity, a virtue expected of all Christians, is the state of sexual purity; for a vowed celibate, or for the single person, chastity means the abstinence from sexual activity. For the married person, chastity means the practice of sex only within marriage between a man and woman, provided that it is unitive and open to the possibility of new life (i.e. non-contraceptive).

Celibacy is the male counterpart to female virginity, implying that the celibate was not only not married, but that he had never been married.[citation needed]