From Infogalactic: the planetary knowledge core
Jump to: navigation, search
Not to be confused with Easter Saturday.

Holy Saturday (Latin: Sabbatum Sanctum) i.e. the Saturday of Holy Week, also known as the Great Sabbath, Black Saturday, or Easter Eve,[1] and called "Joyous Saturday" or "the Saturday of Light" among Coptic Christians, is the day after Good Friday. It is the day before Easter and the last day of Holy Week in which Christians prepare for Easter. It commemorates the day that Jesus Christ's body lay in the tomb and the Harrowing of Hell.

Holy Saturday is sometimes referred to as Easter Saturday. Some authorities consider that usage incorrect, holding that the term is only correctly applied to the Saturday in Easter Week.[2][3] However, using the term "Easter Saturday" to refer to the day between Good Friday and Easter Sunday is used in legislation in the Australian states of New South Wales and Queensland,[4] and is in common use in Australia, including by government agencies.[5]

On this day, the Blessed Virgin Mary as Our Lady of Sorrows is assigned the title Our Lady of Solitude, referring to her solace and grief at the death of her son Jesus. 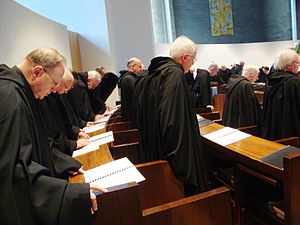 In Roman Catholic churches, the chancel remains stripped completely bare (following the Mass on Maundy Thursday) while the administration of the sacraments is severely limited. Holy Communion, except for the Good Friday service, is given only as Viaticum to the dying. Baptism, Penance, and Anointing of the Sick may be administered because they, like Viaticum, are helpful to ensuring salvation for the dying.

All Masses are severely limited. No Mass at all appears in the normal liturgy for this day, although Mass can be said on Good Friday and on Holy Saturday for an extremely grave or solemn situation with a dispensation from the Vatican or the local bishop. Many of the churches of the Anglican Communion as well as Lutheran, Methodist, and some other Churches observe most of the same; however, their altars may be covered in black instead of being stripped.

In some Anglican churches, including the Episcopal Church in the United States, provision is made for a simple Liturgy of the Word on this day, with readings commemorating the burial of Christ. Daily Offices are still observed. In the Moravian churches in North America, the day is known as Great Sabbath. The Anglican Book of Common Prayer uses Easter Eve to designate the day.

Liturgically speaking, Holy Saturday lasts until 6pm or dusk, after which the Easter Vigil is celebrated, marking the official start of the Easter season. The rubrics [6] state that the Easter Vigil must take place in the night; it must begin after nightfall and end before dawn. The service may start with a fire and the lighting of the new Paschal candle. In Roman Catholic and some Anglican observance, the Mass is the first Mass since that of Maundy Thursday, and during it, the "Gloria" — which has been absent during Lent — is used, and during that "Gloria", the church statues and icons, in places where they are covered with purple veils during Passiontide, are dramatically unveiled. Some Anglican churches prefer to celebrate Easter and the lighting of the new Paschal candle at dawn on Easter Day. Baptisms may take place in this service and Baptism vows are often renewed.

The icon of Holy and Great Saturday, portraying the Harrowing of Hades

In Eastern Orthodoxy this day, known as Holy and Great Saturday, is also called The Great Sabbath since it is on this day that Christ "rested" physically in the tomb. But it is also believed that it was on this day he performed in spirit the Harrowing of Hades and raised up to Paradise those who had been held captive there. In the Coptic, Ethiopian and Eritrean Orthodox Churches, this day is known as Joyous Saturday.

Matins of Holy and Great Saturday (in parishes usually held on Friday evening)[citation needed] takes the form of a funeral service for Christ. The entire service takes place around the Epitaphios (Slavonic: Plashchanitsa), an icon in the form of a cloth embroidered with the image of Christ prepared for burial. The first part of the service consists of chanting Psalm 118, as usual at both Saturday matins and at funerals, but interspersed with hymns (enkomia or lamentations) between the verses. The predominant theme of the service is not so much one of mourning, but of watchful expectation:[7]

Today Thou dost keep holy the seventh day,
Which Thou has blessed of old by resting from Thy works.
Thou bringest all things into being and Thou makest all things new,
Observing the Sabbath rest, my Saviour, and restoring strength.[8]

Near the end of matins, at the end of the Great Doxology, the Epitaphios is taken up and carried in procession around the outside of the church, while the Trisagion is sung, as is done when carrying the body to the cemetery in an Orthodox burial. 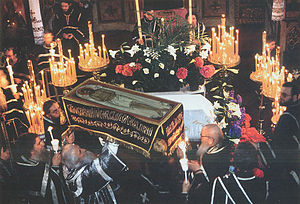 Beginning of the epitaphios procession at Great Saturday Matins

On Saturday afternoon, a vesperal Divine Liturgy of Saint Basil the Great is celebrated, called the First Resurrection Service (Greek: Ἡ Πρώτη Ἀνάστασις), named so because it is earlier chronologically than the later service drawn up by St John Damascene, rather than because it occurs earlier liturgically.[9] This is the longest Divine Liturgy of the entire year and the latest. After the Little Entrance there are 15 Old Testament readings which recall the history of salvation. Just before the Gospel reading (Matthew 28:1-20) the hangings, altar cloths and vestments are changed from black to white and the deacon performs a censing of the church. In the Greek tradition, the clergy strew laurel leaves and flower petals all over the church to symbolize the shattered gates and broken chains of hell and Jesus' victory over death. While the liturgical atmosphere changes from sorrow to joy at this service, the Paschal greeting, "Christ is risen!", is not exchanged until after the Paschal Vigil later that night, and the faithful continue to fast. The reason for this is that the Divine Liturgy on Holy and Great Saturday represents the proclamation of Jesus' victory over death to those in Hades, but the Resurrection has not yet been announced to those on earth which takes place during the Paschal Vigil. 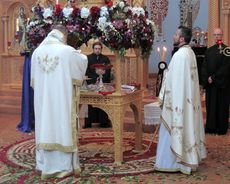 Great Lent was originally the period of catechesis for new converts in order to prepare them for baptism and chrismation and when there are converts received, that occurs during the Old testament readings during the vesperal divine liturgy. In the afternoon, and before the midnight service, the faithful gather in church for the reading of the Acts of the Apostles in its entirety. Preceding midnight the Paschal Vigil begins with the Midnight Office, during which the Canon of Holy Saturday is repeated, toward the end of which the epitaphios is removed from the center of the church and placed on the altar table where it remains until the Ascension. Then, all of the candles and lights in the church are extinguished, and all wait in darkness and silence for the proclamation of the Resurrection of Christ.

Prior to the composition of the current Paschal Vigil of St. John of Damascus,[10] this day's vesperal liturgy was the main Easter celebration.[citation needed]

Święconka (Polish pronunciation: [ɕvʲɛnˈtsɔnka]), meaning "the blessing of the Easter baskets", on Holy Saturday, is one of the most enduring and beloved Polish traditions.

In the predominantly Roman Catholic Philippines, the day is legally and colloquially known in English as Black Saturday, given the colour's role in mourning. Commercial establishments, along with television and radio stations operate on shorter hours or remain closed altogether, while the traditional taboos on merrymaking and eating meat are carried over from the previous day. After the liturgical changes of the Second Vatican Council, the term Sábado de Gloria (Spanish for Gloria Saturday) also became widely used, referring to the first chanting during the Easter Vigil of the Gloria in Excelsis Deo since Quinquagesima Sunday.