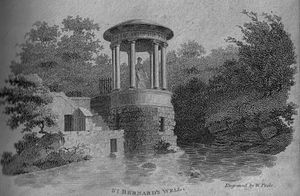 Saint Bernard's well at Stockbridge near Edinburgh in 1800.[1] 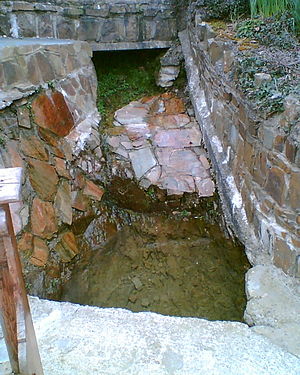 A holy well or sacred spring is a spring or other small body of water revered either in a Pagan or Christian context, often both. Holy wells were frequently pagan sacred sites that later became Christianized. The term holy well is commonly employed to refer to any water source of limited size (i.e. not a lake or river, but including pools and natural springs and seeps), which has some significance in the folklore of the area where it is located, whether in the form of a particular name, an associated legend, the attribution of healing qualities to the water through the numinous presence of its guardian spirit or Christian saint, or a ceremony or ritual centred on the well site. In Christian legend, the water is often said to have been made to flow by the action of a saint, a familiar theme especially in the hagiography of Celtic saints.

The term haeligewielle is in origin an Anglo-Saxon toponym attached to specific springs in the landscape;[2] its current use has arisen through folklore scholars, antiquarians, and other writers generalising from those actual 'Holy Wells' which survived into the modern era. The term ‘holy-hole' is sometimes employed.[3] The terms 'hole' and 'holy' are etymons.

Holy wells in different forms occur in such a wide variety of cultures, religious environments, and historical periods that it is usually held that it is a universal human instinct to revere sources of water.[4] However, the fragmentary nature of the evidence, and the historical differences among cultures and nations, make it very hard to generalize. While there are a few national studies of holy well lore and history, mainly concentrating on Ireland and the British Isles, there is a need for more work examining other regions.

The earliest work specifically devoted to holy wells is Philip Dixon Hardy's Holy Wells of Ireland (1836), a Protestant attack on Catholic observances at Irish wells bearing the names of Christian saints, or otherwise considered sacred. By the later 19th century, the term had acquired its current usage: Robert Charles Hope's The Legendary Lore of the Holy Wells of England (1893), the first general survey of its kind, included a number of named wells which were not dedicated to saints (as well as some rivers and lakes with associated folklore, as Hope mentioned in his subtitle).

In ancient Greece and Rome a nymphaeum or nymphaion (Greek: νυμφαίον), was a monument consecrated to the nymphs, especially those of springs.

In England, there are examples of reverence for wells and springs at a variety of historical periods. The medieval traveller William of Worcester saw a ‘holy-hole, or well’ within the cave at Wookey (Somerset), a site of human habitation in the Palaeolithic era and the source of a river which had been the site of ritual activity.[3] The proximity of named springs to Neolithic or Iron Age monuments, such as the Swallowhead Springs, close to Silbury Hill (Wiltshire) or the Holy Well near Tadmarton Hill (Oxfordshire), suggests that reverence for such sites continued without a break. There is abundant evidence for the importance of wells and springs in the Roman and sub-Roman period, not just at temple complexes such as Bath (Somerset), Chedworth (Gloucestershire),[5] and Blunsdon Ridge (Wiltshire)[6] which have medicinal springs at their centre, but a variety of smaller sites, and at wells and ritual shafts used for superstitious and sub-religious rituals.[7] 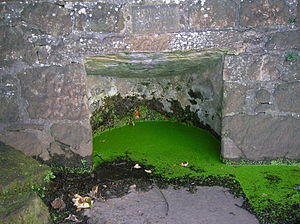 Christianity strongly affected the development of holy wells in Europe and the Middle East. Aside from the spring that issued from the staff of Moses and the Well of Beersheba, there were already a number of sites mentioned in Jewish and Christian folklore, including Moses’ well near Mount Nebo, visited by the fourth-century nun Egeria and many other pilgrims. St Athanasius’ Life of St Antony, written about 356–62, mentions the well created by the desert hermit Antony. It is unclear how many Christian holy wells there may have been, as records are very fragmentary and often a well appears only once, making it impossible to tell when reverence for it began and when it ceased, but by the Reformation England, for instance, probably possessed some hundreds. As they were closely linked with the cults of the saints, many wells in countries that converted to Protestant forms of Christianity fell into disuse and were lost, the Holy Well at Walsingham (Norfolk) being a good example, which, having been an integral element of the pilgrimage to the shrine of the Virgin Mary in the village, vanished completely. Visiting of wells for therapeutic and entertainment purposes did not completely die out, however, as spas became fashionable in the 17th century and later. Eventually antiquarians (from the 17th century) and folklorists (from the 19th) began to take notice of holy wells and record their surviving traditions.[8]

Over a hundred holy wells exist in Cornwall, each associated with a particular saint, though not always the same one as the dedication of the church.[9][10]

The reformers of the 16th century often assumed that medieval Catholic practices embodied lingering remains of Pagan religious practices, and thought of holy wells in that way. This affected the outlook of those who came to study holy well traditions later. The pioneers of folklore study took the view that the customs and legends they were recording were debased versions of Pagan rites and myths. Thus it became standard to begin any account of holy wells with the statement that the Christian church had adopted them from the Pagans and replaced the Heathen gods with Christian saints, in order to win people over to the new religion more smoothly. 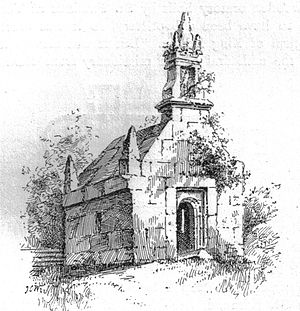 Among the earliest enthusiasts for holy wells in modern times was the Neopagan movement, for whom wells formed part of 'earth mysteries' study along with ley lines and ancient sites; the view that the Christians had ‘stolen’ holy wells from the Pagan religions fitted in well with their position.[12] The magazines Wood and Water and Meyn Mamvro, among others, helped shape this approach. During the early- and mid-1990s this viewpoint was under increasing attack crowned by the publication of Ronald Hutton’s The Pagan Religions of the Ancient British Isles (1991) which argued that the evidence for what constituted pre-Christian British religious practices, certainly outside Romano-British times, was next to nil.[citation needed] As far as wells themselves were concerned, the controversy emerged in the pages of Source, the holy wells journal edited by Roy Fry and former Benedictine monk Tristan Gray-Hulse. A number of articles in the journal challenged long-standing myths about holy well history, and the editors published an exchange between the authors and Cheryl Straffon, editor of Cornish earth mysteries magazine Meyn Mamvro, about the evidence for a particular Cornish well’s supposed association with the Irish goddess Brigid. The eco-pagan movement has largely accepted the new historiographical approach,[citation needed] but occasionally rather more old-fashioned accounts of holy wells are published, for instance Gary Varner’s Sacred Springs (2002).

A linked argument was over the nature of the influence of the Celts on the well cult. The late Francine Nicholson, an independent student of Celtica, argued forcefully and controversially that the Celts had a unique sensitivity to sacred wells, but never elaborated this in any published work.[13]

More recently, radically minded scholars have begun questioning the unity of concepts imposed by the term ‘holy well’. In a paper in the Living Spring Journal, Jeremy Harte distinguishes between early Anglo-Saxon ‘holy wells’ and those Christianised in the late Middle Ages, and argues ‘apart from being venerated and being wet, they have little in common’; Harte has also stressed that limited evidence may mean that scholars are considerably overestimating the number of holy wells which were active at any one time.[14]

In a sense, the restoration of holy wells began almost as soon as they were in decline, as a number became the subject of antiquarian interest and some were turned into garden features and put to other decorative uses. However, in more modern times wells have been restored as an expression of interest in the past, sometimes from romantic or religious motives, but mostly as a statement of continuity with the history of a particular community. A good example is St Osyth’s Well at West Bierton (Buckinghamshire), ‘restored’ (and in the process rebuilt completely) by the Parish Council as part of a project marking Millennium Year in 2000.[15]

The most active holy wells in Britain are those linked to Christian pilgrimages, at Walsingham, Fernyhalgh (Lancashire) and Holywell (Wales), or popular tourist sites (Bath, Somerset). The Chalice Well at Glastonbury (Somerset) is at the centre of a Neopagan- and New Age-orientated spirituality and retreat centre. Other wells, however, are often visited on an informal basis for religious or sightseeing reasons. New forms of holy well reverence continue to emerge now and again, notoriously the so-called Well of the Triple Goddess at Minster-in-Sheppey (Kent).[16] In 2001 Channel 4’s archaeological television programme Time Team was responsible for exposing the infamous archaeological fraud of Llygadwy, a site which included an alleged holy well.[17]

Historiographically, the publication of Janet and Colin Bord’s Sacred Waters (1985) was influential in reviving interest in the history and folklore of holy wells in Britain. The same year saw the foundation of the journal Source by Mark Valentine. Attempts to maintain a regular journal for the study of holy wells have been erratic (Source enjoyed two runs from 1985–89 and 1994–98, and the web-based Living Spring has only had two issues to date) but postings on websites such as The Megalithic Portal show that there is still much interest in this category of ancient site.

Case study: the necessity of vigilance in preservation of heritage

Often unmarked on maps and undistinguished by archaeological features, holy wells are a uniquely vulnerable category of ancient site. They continue to be lost to farming, drainage work, development or neglect. A recent instance is the desecration of St Bridget’s Well at Rosepark, Balrothery (County Dublin, Ireland), destroyed by building work in 2003 despite being a protected monument.[18] and the destruction of a well at Rath Lugh during the construction of the M3 Motorway in the Tara-Skryne Valley, Ireland.