From Infogalactic: the planetary knowledge core
Jump to: navigation, search
For other uses, see Honeycomb (disambiguation). 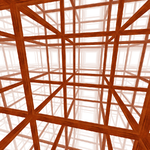 In geometry, a honeycomb is a space filling or close packing of polyhedral or higher-dimensional cells, so that there are no gaps. It is an example of the more general mathematical tiling or tessellation in any number of dimensions. Its dimension can be clarified as n-honeycomb for a honeycomb of n-dimensional space.

Honeycombs are usually constructed in ordinary Euclidean ("flat") space. They may also be constructed in non-Euclidean spaces, such as hyperbolic honeycombs. Any finite uniform polytope can be projected to its circumsphere to form a uniform honeycomb in spherical space. 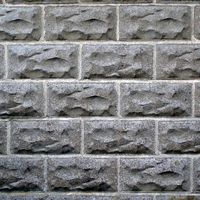 It is possible to fill the plane with polygons which do not meet at their corners, for example using rectangles, as in a brick wall pattern: this is not a proper tiling because corners lie part way along the edge of a neighbouring polygon. Similarly, in a proper honeycomb, there must be no edges or vertices lying part way along the face of a neighbouring cell. Note that if we interpret each brick face as a hexagon having two interior angles of 180 degrees, we can now accept the pattern as a proper tiling. However, not all geometers accept such hexagons.

There are infinitely many honeycombs, which have only been partially classified. The more regular ones have attracted the most interest, while a rich and varied assortment of others continue to be discovered.

The simplest honeycombs to build are formed from stacked layers or slabs of prisms based on some tessellations of the plane. In particular, for every parallelepiped, copies can fill space, with the cubic honeycomb being special because it is the only regular honeycomb in ordinary (Euclidean) space. Another interesting family is the Hill tetrahedra and their generalizations, which can also tile the space.

A 3-dimensional uniform honeycomb is a honeycomb in 3-space composed of uniform polyhedral cells, and having all vertices the same (i.e., the group of [isometries of 3-space that preserve the tiling] is transitive on vertices). There are 28 convex examples in Euclidean 3-space,[1] also called the Archimedean honeycombs.

A 3-honeycomb having all cells identical within its symmetries is said to be cell-transitive or isochoric. A cell of such a honeycomb is said to be a space-filling polyhedron.[2]

Five space-filling polyhedra can tessellate 3-dimensional euclidean space translation only. They are called parallelohedra and there are 5 of them:

Other known examples include:

Other honeycombs with two or more polyhedra

Sometimes, two [9] or more different polyhedra may be combined to fill space. Besides many of the uniform honeycombs, another well known example is the Weaire–Phelan structure, adopted from the structure of clathrate hydrate crystals [10] 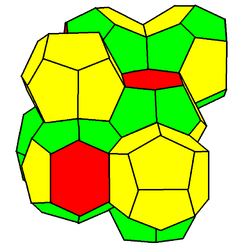 Documented examples are rare. Two classes can be distinguished: 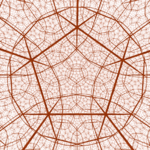 A dodecahedral honeycomb in hyperbolic space

For every honeycomb there is a dual honeycomb, which may be obtained by exchanging:

cells for vertices.
faces for edges.

These are just the rules for dualising four-dimensional 4-polytopes, except that the usual finite method of reciprocation about a concentric hypersphere can run into problems.

Honeycombs can also be self-dual. All n-dimensional hypercubic honeycombs with Schläfli symbols {4,3n−2,4}, are self-dual.