From Infogalactic: the planetary knowledge core
Jump to: navigation, search
For other uses, see Honeymoon (disambiguation).

A honeymoon is the traditional holiday taken by newlyweds to celebrate their marriage in intimacy and seclusion. Today, honeymoons are often celebrated in destinations considered exotic and/or romantic. 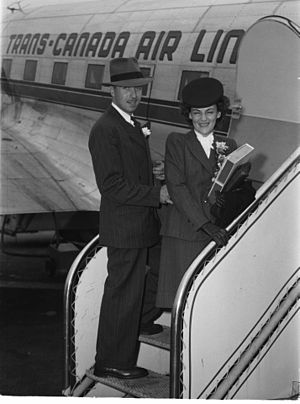 This is the period when newly wed couples take a break to share some private and intimate moments that helps establish love in their relationship. This privacy in turn is believed to ease the comfort zone towards a physical relationship, which is one of the primary means of bonding during the initial days of marriage. The earliest term for this in English was hony moone, which was recorded as early as 1546.[1][2][3]

In Western culture, the custom of a newlywed couple going on a holiday together originated in early 19th century Great Britain. Upper-class couples would take a "bridal tour", sometimes accompanied by friends or family, to visit relatives who had not been able to attend the wedding.[4] The practice soon spread to the European continent and was known as voyage à la façon anglaise (English-style voyage) in France from the 1820s on.

Honeymoons in the modern sense (i.e. a pure holiday voyage undertaken by the married couple) became widespread during the Belle Époque,[5] as one of the first instances of modern mass tourism. This came about in spite of initial disapproval by contemporary medical opinion (which worried about women's frail health) and by savoir vivre guidebooks (which referred the public attention drawn to what was assumed to be the wife's sexual initiation). The most popular honeymoon destinations at the time were the French Riviera and Italy, particularly its seaside resorts and romantic cities such as Rome, Verona or Venice. Typically honeymoons would start on the night they were married, with the couple leaving midway through the reception to catch a late train or ship. However, in the 21st century, many couples will not leave until 1–3 days after the ceremony and reception in order to tie up loose ends with the reception venue and/or simply enjoy the reception to its fullest and have a relaxing night afterwards to recover, before undertaking a long journey. In Jewish traditions, honeymoons are often put off seven days to allow for the seven nights of feasting if the visits to friends and family can't be incorporated into the trip.

The Oxford English Dictionary offers no etymology, but gives examples dating back to the 16th century. The Merriam-Webster dictionary reports the etymology as from "the idea that the first month of marriage is the sweetest" (1546).

"The first month after marriage, when there is nothing but tenderness and pleasure" (Samuel Johnson); originally having no reference to the period of a month, but comparing the mutual affection of newly married persons to the changing moon which is no sooner full than it begins to wane; now, usually, the holiday spent together by a newly married couple, before settling down at home.

One of the more recent citations in the Oxford English Dictionary indicates that, while today honeymoon has a positive meaning, the word was originally a reference to the inevitable waning of love like a phase of the moon. This, the first known literary reference to the honeymoon, was penned in 1552, in Richard Huloet's Abecedarium Anglico Latinum. Huloet writes:[6]

Hony mone, a term proverbially applied to such as be newly married, which will not fall out at the first, but th'one loveth the other at the beginning exceedingly, the likelihood of their exceadinge love appearing to aswage, ye which time the vulgar people call the hony mone.

A widely disputed explanation of the term[7][8] claims that it comes from a tradition in any of a number of cultures (e.g. Welsh,[9] German or Scandinavian[10] or Babylonian[11]) where mead was drunk in great quantities at weddings and then after the ceremony nuptial couples were given a month’s supply of mead.[11] It was believed that by faithfully drinking mead for that first month, the woman would “bear fruit” and a child would be born within the year.[12]

There are many words of similar meaning in other languages. The Sinhalese form translates as "Madhu Samaya" (මධු සමය). The French form translates as "moon of honey" (lune de miel), as do the Spanish (luna de miel), Romanian (luna de miere), Nepali (Madhumas) Portuguese (lua de mel) and Italian (luna di miele) equivalents. The Welsh word for honeymoon is mis mêl, which means "honey month", and similarly the Ukrainian (медовий місяць), Polish (miesiąc miodowy), Russian (медовый месяц), Arabic (شهر العسل shahr el 'assal), Greek (μήνας του μέλιτος) and Hebrew (ירח דבש yerach d'vash) versions. (Interestingly, Yerach is used for month, rather than the more common Chodesh. Yerach is related to the word Yare'ach for moon and the two words are spelled alike: ירח.) The Persian word is ماه عسل māh-e asal which means both "honey moon" and "honey month" (māh in Persian means both moon and month). The same applies to the word ay in the Turkish equivalent, balayı. In Hungarian language it is called "honey weeks" (mézeshetek). Likewise, the Tamil word for honeymoon is தேனிலவு (thaen nilavu), with thaen 'honey' and nilavu 'moon', and the Marathi word for honeymoon is मधुचंद्र (madhuchandra) with Madhu 'honey' and chandra 'moon', whereas in Bangla ('Bengali') language, it is referred to as মধুচন্দ্রিমা (modhuchondrima) with modhu 'honey and chondrima 'moon'.In Hindi सुहागरात(suhaagraat) and in Punjabi honeymoon is also called ਸੁਹਾਗਰਾਤ(suhaagraat).