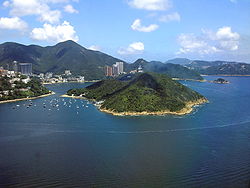 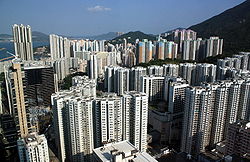 Kornhill and Shau Kei Wan, located in the northern part of Eastern District

Hong Kong Island (Chinese: 香港島) is an island in the southern part of the Hong Kong Special Administrative Region. It has a population of 1,289,500 and its population density is 16,390/km²,[1] as of 2008. The island had a population of about 3,000 inhabitants scattered in a dozen fishing villages when it was occupied by the United Kingdom in the First Opium War. In 1842 the island was formally ceded in perpetuity to the UK under the Treaty of Nanking and the City of Victoria was then established on the island by the British Force in honour of Queen Victoria.

The Central area on the island is the historical, political and economic centre of Hong Kong. The northern coast of the island forms the southern shore of the Victoria Harbour, which is largely responsible for the development of Hong Kong due to its deep waters favoured by large trade ships.

The island is home to many of the most famous sights in Hong Kong, such as "The Peak", Ocean Park, many historical sites and various large shopping centres. The mountain ranges across the island are also famous for hiking. The northern part of Hong Kong Island together with Kowloon forms the core urban area of Hong Kong. Their combined area is approximately 88.3 km2 (34.5 sq. mi.) and their combined population (that of the northern part of the island and of Kowloon) is approximately 3,156,500, reflecting a population density of 35,700/km² (91,500/sq. mi.).

The island is often referred to locally as "Hong Kong side" or "Island side". This style was formerly applied to many locations (e.g. 'China-side' or even 'Kowloon Walled City-side') but is now only heard in this form and 'Kowloon side', suggesting the two sides of the harbour.[2] The form was once more common in Britain than now, such as 'Surrey-side'[3] and is still seen in British placenames like 'Cheapside', 'Tyneside', and 'Teesside', not all of which have an obvious watercourse or boundary with actual sides.

Hong Kong Island is not part of the Islands District. Four districts of Hong Kong are located on the island:

Hong Kong Island is one of the five Legislative Council geographical constituencies.

Hong Kong island became a colony of the British Empire when their forces defeated the Chinese in the First Opium War (1839-1842). The island was populated by only a few thousand people when British empire colonized it, and was thus described as being almost uninhabited.

The Second World War was a dark period for Hong Kong. In the 1930s, the British anticipated a Japanese attack on Hong Kong. As Wong Nai Chung Gap was a strategic important place of defence, large-scale defensive works were constructed there, including anti-aircraft batteries, howitzers, and machine gun nests.

The Battle of Hong Kong began on 8 December 1941. British, Canadian, Indian armies and the Hong Kong Volunteer Defence Forces resisted the Japanese invasion commanded by Sakai Takashi, which began eight hours after the attack on Pearl Harbor. However, the Japanese were able to take control of the Hong Kong skies on the first day of attack, outnumbering the defenders. The defenders retreated from the Gin Drinker's Line and consequently from Kowloon under heavy aerial bombardment and artillery barrage.

On 18 December, the Japanese had conquered North Point, reaching Wong Nai Chung Gap on the next day. English and Scottish forces and the Canadian Winnipeg Grenadiers vigorously defended the crucial point of Wong Nai Chung Gap, and for a while successfully secured the passage between Central and the secluded southern parts of the island. Japanese casualties were about 600. However, Allied forces there were ultimately defeated by the Japanese on 23 December, and Wong Nai Chung Reservoir was lost – the only one in Hong Kong at the time. As Wan Chai Gap had also fallen that same day, the British had no choice but to surrender.

Hong Kong was surrendered on 25 December 1941, thereafter often called "Black Christmas" by locals. The Governor of Hong Kong, Mark Young, surrendered in person at the temporary Japanese headquarters, on the third floor of the Peninsula Hotel, thus beginning the Japanese occupation of Hong Kong. Isogai Rensuke became the first Japanese governor of Hong Kong. Hyper-inflation and food rationing followed; and the Japanese declared Hong Kong Dollars illegal. The Japanese enforced a repatriation policy throughout the period of occupation because of the scarcity of food and the possible counter-attack of the Allies. As a result, the unemployed were deported to the Mainland, and the population of Hong Kong had dwindled from 1.6 million in 1941 to 600,000 in 1945.[4]

Hong Kong Island Lua error in Module:Coordinates at line 668: callParserFunction: function "#coordinates" was not found. is the second-largest island of the territory, the largest being Lantau Island. Its area is 78.59 km², including 6.98 km² of land reclaimed since 1887 and some smaller scale ones since 1851. It makes up approximately 7% of the total territory. It is separated from the mainland (Kowloon Peninsula and New Territories) by Victoria Harbour.

Most of the hills across the middle of the island are included within the country parks.

80.2% of Hong Kong Island's residents use Cantonese as their usual language, while 8% use English and 1.9% use Mandarin.[5] 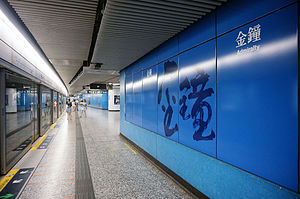 The Island Line of the MTR underground railway network runs exclusively on Hong Kong Island, from Kennedy Town in the west to Chai Wan in the east, along the northern coastline of the island. Tsuen Wan Line and Tseung Kwan O Line have cross-platform interchange stations with the Island Line which extend the metro transport northward across the Victoria Harbour. Tung Chung Line and Airport Express which connect to the Lantau Island and international airport share one single station on the island at Hong Kong Station, north to Central Station and provide pedestrian link between the 2 stations within paid area.

South Island Line (East) is under construction which will provide metro service from Admiralty to Ap Lei Chau via Wong Chuk Hang. This line is expected to inaugurate in 2016 and relieve the congested Aberdeen Tunnel during rush hour. North South Corridor, the southward extension of the East Rail Line will also terminate at Admiralty and stop by the Hong Kong Convention and Exhibition Centre before leaving the island, providing direct metro service to the Hong Kong–Shenzhen border checkpoints. This line is tentatively expected to open in 2021. North Island Line is planned to extend Tung Chung Line and Tseung Kwan O Line to be met at Tamar Station. The majority of the extended sections will be situated beneath the reclaimed land of the northern coastline of the island. The project is aimed at sharing the load of the already busy Island Line, but it will not begin construction before 2020.

Hong Kong Tramways and the Peak Tram run exclusively on Hong Kong Island, which run from Kennedy Town to Shau Kei Wan, with a branch links from Causeway Bay to Happy Valley and the Central District to Victoria Peak respectively.

Hong Kong Island is connected to the Kowloon Peninsula on the mainland by two road-only tunnels (the Cross-Harbour Tunnel and the Western Harbour Tunnel), two MTR railway tunnels (Tsuen Wan Line and Tung Chung Line) and one combined road and MTR rail link tunnel (Eastern Harbour Tunnel, containing the Tseung Kwan O Line and road traffic in separate conduits running side by side). A fourth rail link (Shatin to Central Link from Causeway Bay to Hung Hom) and a fourth harbour-crossing tunnel are being planned in order to solve the congested traffic of the current tunnels in peak hours. There is no bridge between the island and the mainland. A bridge connects Ap Lei Chau and Wong Chuk Hang of Aberdeen on Hong Kong Island. It was opened in 1983 with two lanes and was expanded to four in 1994.