Honiton (/ˈhʌnitən/ or /ˈhɒnitən/) is a market town and civil parish in East Devon, situated close to the River Otter, 17 miles (27 km) north east of Exeter in the county of Devon. Honiton has a population estimated at 11,822[1] (based on mid-year estimates for the two Honiton Wards in 2009).

The town grew along the line of the Fosse Way, the ancient Roman road linking Exeter (Isca Dumnoniorum) to Lincoln (Lindum) on which it was an important stopping point. The location is mentioned in the Domesday Book as Honetone, meaning a farm belonging to Huna. It became an important market town, known for its lace making that was introduced by Flemish immigrants in the Elizabethan era. In the 17th century thousands of people produced lace by hand in their homes, and later in the 19th century Queen Victoria had her wedding dress made of Honiton lace. The town also became known for its pottery. In the mid-18th century the town was largely destroyed by fire. Georgian houses were then built to replace some of those that had been destroyed. Honiton more than doubled in size between the 1960s and 2005, with most development taking place south of the Exeter to Waterloo railway line.

The Hot Pennies ceremony takes place annually on the first Tuesday after 19 July in the High Street of the town, and dates back to the reign of King Stephen. The ceremony has its roots in the practice of landed gentry taking pleasure in throwing hot pennies from windows to local peasants, a seemingly philanthropic gesture resulting in burns. The custom also had the purpose of encouraging people to travel to the town from the surrounding area to attend a subsequent fair.[2]

At noon, the Town Crier accompanied by the Mayor and other local dignitaries, raises a garlanded pole with gloved hand at the top, and proclaims that "no man may be arrested so long as this glove is up". Warm pennies are then thrown from a number of balconies in the High Street to crowds of local people. The pole is then kept on display for the following "fair week". The children of Honiton Community College are allowed off campus for the duration of the Hot Pennies Ceremony itself.[citation needed]

The size of Honiton in 2005 was approximately 3.2 square kilometres (790 acres). Further development will be limited as Honiton borders the East Devon AONB (Area of Outstanding Natural Beauty) to the south and the Blackdown Hills AONB to the north and east. AONBs have the same level of protection as National Parks of England and Wales which restricts new developments. 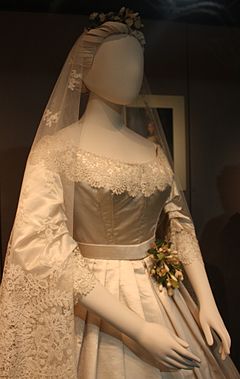 This wedding dress from 1865 is trimmed with Honiton lace.

There are still indications of its history as a centre for lace making, such as places called "Lace Walk" and the "Honiton Lace Shop", now a Chinese style restaurant, the shop’s role has been filled by the Allhallows Museum of Lace and Local Antiquities.The last working lace shop in Honiton is still in existence at the far end of the town. This is a peculiar building attached to a house. The shop was built for the Fowler family who had the Royal Warrant for lace making, and was designed to maximise the natural light for the lace workers. The premises are now used by genealogists who have photos of the shop in its lace making days. The museum was once Allhallows Chapel, built in the 13th century, and reputed to be the oldest building in Honiton. It was once the home of Allhallows School.

The buildings of High Street are almost all Georgian, dating from after the two fires of 1747 and 1765. Of particular interest are Marwood House, 1619, and the Manor House, which was originally a coaching inn (the added porch is 19th-century). Honiton Garage dates from about 1700 and the Market Hall (which originally had arcades on the ground floor and an assembly room above) has a modest early-19th-century stone front.[3]

St Michael's Parish Church, which was rebuilt in 1911 after a fire, is situated on a small hill above the town. The old church was large and perfectly rectangular: it was built in the Perpendicular style, with two aisles, two transepts (which did not project), and the chancel and two chancel chapels equal to it in length. The west tower and the outer walls are all that remains of the old building. The cost of the original building was paid by Bishop Courtenay of Exeter, lord of the manor of Honiton (west part) and by John and Joan Takell (east part).[3]

The mid-19th-century St Paul's Church was designed by Charles Fowler and is situated in the centre of the town. Its erection in 1835 required an act of Parliament[4] and the demolition of half of the adjacent Allhallows Chapel. It was built in 1837–38 in a style incorporating elements of Romanesque architecture. There are pinnacles on the tower and the arcades inside have tall columns; above the nave is a clerestory which resembles those in early Christian basilicas.[5]

Honiton is host to the annual Honiton Agricultural Show, a traditional event dating back to 1890.[6]

Honiton has a sports centre with swimming pool and a number of pubs and restaurants. Retail outlets include chain stores such as Co-operative, Lidl, Aldi, Iceland, Argos, Homebase, Screwfix, Tesco, Boots and W H Smith. The town also boasts many estate agents. There are also many small independent shops, including jewellers, clothes shops and sweet shops. On Tuesdays, Thursdays and Saturdays an outdoor street market is held on the High Street. Honiton is also known to be popular with antique hunters, boasting over 20 antique shops.

Honiton railway station is on the West of England Main Line that runs from London Waterloo to Exeter.

Honiton is twinned with Mézidon-Canon in France, and Gronau-Leine in Germany.[11]