A hook echo is a pendant or hook shaped weather radar signature as part of some supercell thunderstorms. It is found in the lower portions of a storm as air and precipitation flow into a mesocyclone resulting in a curved feature of reflectivity. The echo is produced by rain, hail, or even debris being wrapped around the supercell.[1] It is one of the classic hallmarks of tornado-producing supercells.[2] The National Weather Service may consider the presence of a hook echo as sufficient to justify issuing a tornado warning.[3][4]

The hook echo has been recognized as a sign of tornado development early in weather radar's history. In 1949, E. M Brooks had referred to circulations having radii of approximately 8–16 km with supercells thunderstorms and named them tornado cyclones.[5] The first documented tracking of a hook echo associated with a tornado was on April 9, 1953 by the Illinois State Water Survey near Urbana-Champaign, during preparations for an early test of radar's ability to measure rainfall rates by Donald Staggs electrical engineer of Dr. Huff research team.[6][7]

Ted Fujita documented hook echoes associated with other supercells on the same day as Huff team made their observations. He inferred the concept of thunderstorm rotation from viewing the evolution of the hook echoes, which he studied in detail.[8] In 1962, J. R. Fulks was the first to hypothesize on the formation of hook echoes.[9] Wind velocity data obtained following the installation of weather radars having Doppler effect capabilities in central Oklahoma in the late 1960s confirmed an association between hook echoes and strong horizontal shear zones associated with storm rotation and tornadoes.[2] 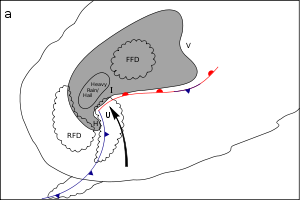 Diagram of air current in a supercell

Hook echoes are a reflection of the movement of air inside and around a supercell thunderstorm. Ahead of the base of the storm, the inflow from the environment is sucked in by the instability of the airmass. As it moves upward, it cools slower than the cloud environment, because it mixes very little with it, creating an echo free tube which ends at higher levels to form a bounded weak echo region or BWER.[2]

At the same time, a mid-level flow of cool and drier air enters the thunderstorm cloud. Because it is drier than the environment, it is less dense and sinks down behind the cloud and forms the rear flank downdraft, drying the mid level portion of the back of the cloud. Those two currents have a rotation, due to the vertical windshear, and interact to form a mesocyclone. Tightening of the rotation due to the interaction of those two air currents near the surface will create the tornado.[2]

File:05june-dow7-wide.gif
Images of Doppler velocities on the left. Around these reflectivities on the right in a thunderstorm during the VORTEX2 project in Goshen County, Wyoming. Data comes from a Doppler on Wheels radar. A hook echo is seen as the appendage on the bottom-left on the reflectivity image.

Near the interaction zone at the surface, there will be a dry slot caused by the updraft on one side and the cloudy area below the rear flank downdraft on the other side. This is the source of the hook echo seen on radar near the surface. Hook echoes are thus a relatively reliable indicator of tornadic activity, however, they merely indicate the presence of a larger mesocyclone structure in the tornadic storm rather than directly detecting a tornado.[2] During some destructive tornadoes, debris lofted from the surface may be detected as a "debris ball" on the end of the hook structure.

Not all thunderstorms exhibiting hook echoes produce tornadoes, and not all tornado-producing supercells contain hook echoes. Also, especially preceding the advent of the more advanced Doppler weather radars, by the time a hook echo could be detected a tornado had often already formed—especially when the storm was far away from the location of the radar.[citation needed]

The use of Doppler weather radar systems, such as NEXRAD, allows for the detection of strong, low-level mesocyclones that produce tornadoes even when the hook echo is not present and also grant greater certainty when a hook echo is present. By detecting hydrometeors moving toward and away from the radar location, the relative velocities of air flowing within different parts of a storm are revealed. These areas of tight rotation known as "velocity couplets" are now the primary trigger for the issuance of a tornado warning. The tornado vortex signature is an algorithm-based detection of this.[10]

Hook echoes are not always obvious. Particularly in the Southern United States, thunderstorms tend to take on a structure of more precipitation surrounding a mesocyclone, which leads to the high precipitation (HP) variation supercell that obscures the hook shape. HP supercells instead often have a high reflectivity pendent or front flank notch (FFN), appearing like a "kidney bean" shape.[11]