Hope Mills is a town in Cumberland County, North Carolina, United States. The population was 15,176 at the 2010 census.[4]

North Carolina Highway 59 (Main Street) runs through the center of the town, leading north 5 miles (8 km) to U.S. Route 401 in western Fayetteville, and south 2.5 miles (4.0 km) to Interstate 95 at Exit 41. Several pieces of land around Exit 41 are within the town limits although not connected to the town center.

Chartered in 1891, Hope Mills can trace its beginning back to 1766, when due to the wealth of natural water power and the abundance of timber, a lumber camp, saw mill, grist mill and pottery business were established. In 1839, construction of the first cotton mill powered by the Hope Mills Dam was completed and was the beginning of a new era for the town. Much of the heritage and the town's name itself can be attributed to the cotton milling industry that followed.

The local cotton mill and many other buildings were burned by General Sherman's troops during the Civil War.

The Big Rockfish Presbyterian Church and Hope Mills Historic District are listed on the National Register of Historic Places.[6]

While the town is small, it offers its residents a full variety of services and recreation. There are public parks and recreational facilities located throughout the town. These facilities provide a wide range of activities from walking trails to tennis courts. Hope Mills has its own police and fire departments and is only minutes away from four major hospitals. The new county library provides a number of special services including summer reading programs and public meeting rooms. Five shopping centers, the historic downtown district, a post office, two medical clinics, five elementary schools Baldwin Elementary, Rockfish Elementary, Collier Elementary Cashwell Elementary, two middle schools South View Middle and Hope Mills Middle, two high schools South View High and Gray's Creek High and more than twenty churches round out a community in which to raise a family and enjoy life.

There were 4,112 households out of which 46.4% had children under the age of 18 living with them, 54.0% were married couples living together, 17.4% had a female householder with no husband present, and 24.4% were non-families. 19.7% of all households were made up of individuals and 5.3% had someone living alone who was 65 years of age or older. The average household size was 2.73 and the average family size was 3.13.

Hope Mills crime statistics report an overall downward trend in crime based on data from 9 years with violent crime increasing and property crime decreasing. Based on this trend, the crime rate in Hope Mills for 2013 is expected to be lower than in 2010.

The data source is the FBI "Report of Offenses Known to Law Enforcement" for the corresponding year or years. Arson numbers are reported inconsistently. Zero values may indicate the data was not available. The projected crime rate data displayed above was generated from the trends and crime data available from previous years of actual reported data. In this case, the Hope Mills crime report data for 2013 was projected from nine years of actual data. The last year of actual available crime data, as reported above, was 2010.

The FBI cautions the data users against comparing yearly statistical data solely on the basis of their population coverage. The comparisons made herein are thus, only meaningful upon further examination of all variables that affect crime in each reported city, state or other reported jurisdiction. 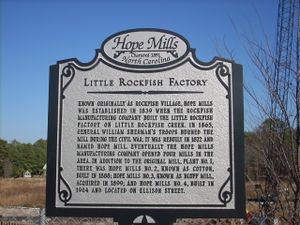