From Infogalactic: the planetary knowledge core
Jump to: navigation, search
Not to be confused with Horace Walpole. 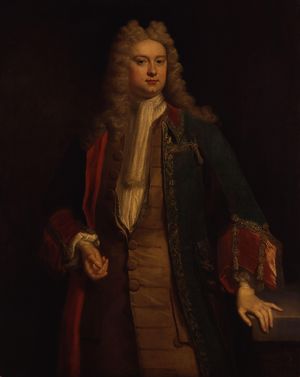 The Walpoles owned land in Norfolk in the 12th century and took their name from Walpole, a village in the county. An early member of the family was Ralph de Walpole, bishop of Norwich from 1288 to 1299, and bishop of Ely from 1299 until his death on 20 March 1302. Among its later members were three brothers, Edward (1560–1637), Richard (1564–1607) and Michael (1570–1624), all members of the Society of Jesus. Another Jesuit in the family was Henry Walpole (1558–1595), who wrote An Epitaph of the life and death of the most famous clerk and virtuous priest Edmund Campion. After an adventurous and courageous career in the service of the order, he was arrested on landing in England, was tortured and then put to death on 17 April 1595.[1]

Born at Houghton and educated at Eton and King's College, Cambridge, Horatio Walpole became a fellow of King's.[2] He entered Parliament in 1702, remaining a member for fifty-four years. In 1715, when his brother, Sir Robert, became first lord of the treasury, he was made secretary to the treasury, and in 1716, having already had some experience of the kind, he went on a diplomatic mission to The Hague. He left office with his brother in 1717, but he was soon in harness again, becoming secretary to the lord-lieutenant of Ireland in 1720 and Secretary to the Treasury a second time in 1721.[1]

In 1722 he was again at The Hague, and in 1723 he went to Paris, where in the following year he was appointed envoy extraordinary and minister plenipotentiary. He got on intimate terms with Fleury and seconded his brother in his efforts to maintain friendly relations with France; he represented Great Britain at the congress of Soissons and helped to conclude the treaty of Seville (November 1729). He left Paris in 1730 and in 1734 went to represent his country at The Hague, where he remained until 1740, using all his influence in the cause of European peace.[1] He was nonetheless able to stay involved in the affairs of the capital. He served, for example, in 1739, as a founding governor for London's most fashionable charity of the time, the Foundling Hospital.

After the fall of Sir Robert Walpole in 1742 Horatio defended his conduct in the House of Commons and also in a pamphlet, "The Interest of Great Britain steadily pursued". Later he wrote an "Apology", dealing with his own conduct from 1715 to 1739, and an "Answer to the latter part of Lord Bolingbroke's letters on the study of history" (printed 1763).[1]

By his wife, Mary Magdalen Lombard, whom he married on 21 July 1720, he had nine children: