Horbury is a large village in the City of Wakefield, a metropolitan district of West Yorkshire, England and part of the West Yorkshire Urban Area. Historically in the West Riding of Yorkshire, it is situated north of the River Calder about three miles (5 km) south west of Wakefield and two miles (3 km) to the south of Ossett. It includes the outlying areas of Horbury Bridge and Horbury Junction. At the 2001 census it had a population of 10,002.[1] Old industries include woollens, engineering and building wagons for the railways but the area is now largely residential.

The name Horbury is attested in 1086 as (H)orberie. It is derived from Old English horu 'dirty land' and burh (in its dative form byrig), which translates as 'filthy fortification' or 'stronghold on muddy land'.[2] Other spellings include Orberie, Horbiry and Horberie.[3] The name possibly referred to a fortification near an old fording point of the River Calder.[4]

The settlement predates the Domesday Book of 1086 in which Horbury and Crigglestone, on the south side of the River Calder, were the only parts of the Manor of Wakefield not described as "waste". The survey recorded about 40 people and four ox-drawn ploughs in 'Orberie' and 'Crigeston' combined. About 400 acres (1.6 km2) of land were in cultivation and much woodland.[5] Horbury had a church dating from about 1106 which was a daughter church of the church in Wakefield and possibly replaced an earlier Saxon church.[6] The Norman church had a tower, nave and chancel.

The Manor of Wakefield was given by the crown to the Earls Warenne in 1106 and was held by them until 1359. Sir Robert de Horbiry and Sir John de Horbiry were stewards to the Earl de Warenne, who granted Sir John the village of Horbury and its lands for life.[7] After the death of Sir John de Horbury in 1306, it became one of the constituent 'graveships' of the Manor of Wakefield.

The oldest surviving house in the village is Horbury Hall in Church Street, built by Ralph Amyas, deputy steward of the Manor of Wakefield. It has been dated by dendrochronology to 1474. Other old buildings include the tithe barn.[8] Theand in Horbury was divided into three great fields, Northfield, Southfield and Westfield, and remains of medieval ridge and furrow of strip cultivation are visible in Carr Lodge Park. 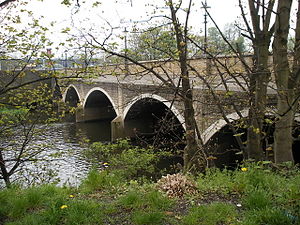 Bridge over the River Calder

A wooden bridge spanned the River Calder on the road from Wakefield to Huddersfield in the 15th century. Money for its upkeep was left in local wills dated 1404 and 1492, a custom that continued into the 16th century.[9] A stone-arched bridge that replaced the wooden structure in the 17th century lasted until it partly collapsed in 1918. A new bridge was completed in 1930 and was repaired in 1991 at a cost of £2 million.[10] Horbury Bridge was flooded after heavy rain in 1946.[11]

Wool spinning and cloth manufacture were important originally as cottage industries.[12] At the start of the Industrial Revolution steam engines were installed at Race's Mill in Dudfleet and Foster's Mill on Engine Lane in 1795.[13] Resistance to the implementation of new textile machinery and the factory system was shown when Luddites, who blamed the new factories for depriving weavers from earning a living in a time of widespread hunger and poverty, destroyed Fosters Mill.[13][14]

Albion Mills and Millfield Mills were built in the 1870s. William Sykes's sports goods works which became part of Slazengers was established at about this time.[15] Slazenger had four factories which produced sports equipment. Since the factories closed the name is preserved in Slazengers Sports and Social Club, which has facilities and floodlit grounds for many different sporting activities. 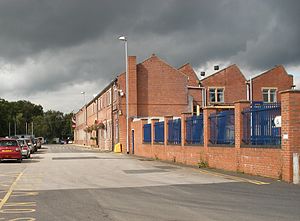 Charles Roberts (1831–1892) who described himself as a joiner, moved the Buffer and Wagon Works he had established on Ings Road, Wakefield to a site at Horbury Junction in 1873. Between 1901 and 1956 the company built 110,000 railway wagons of varying types and by 1945 Charles Roberts and Co.'s works covered 45 acres including the adjacent site of the Horbury Junction Iron Company which it had taken over in 1923. During World War I the firm was among the first to employ women who were employed to forge shell covers.[16] During World War II, the wagon works was used for armament manufacture, and made 1,300 Churchill tanks, half a million naval shells and one and a half million trench mortar bombs.[17] The Horbury Junction Iron Company site was used to build tram bodies for Blackpool and Sheffield trams.[18]

The works later became owned by Procor and then Bombardier Inc.. The last vehicles constructed at the site were Bombardier Voyager trains, the plant closed in 2005; the engineering company Eddison & Wanless now occupies the site.[19]

In 1905, Richard Sutcliffe (1849–1930), who had worked as part-time manager at Hartley Bank Colliery across the valley in Netherton, opened his Universal Works on the site of the old dye house mill on the Horbury-Wakefield boundary in 1905 and started to manufacture conveyor belts and mining machinery. In 1972 the company employed 742 people at its Horbury site.[20]

Historically Horbury was a chapelry in the parish of Wakefield, in the lower division of the Wapentake of Agbrigg and Morley and part of the West Riding of Yorkshire.[12] Following the implementation of the Poor Law Amendment Act of 1834, Horbury became one of the 17 constituent parishes of the Wakefield Poor Law Union formed in 1837.[21] Horbury Urban District Council built the town hall. Its foundation stone was laid on Wednesday 30 July 1902 by Joshua Harrop. The architects and builders were Henry Fallas & Sons of Horbury.

Horbury encompasses the neighbourhoods of Horbury Bridge, named after the crossing of the River Calder and Horbury Junction, named after the railway junction. It covers an area of 1,162 acres (470 ha).[12] The River Calder flows generally west to east in a wide valley across the south of the town alongside the Calder and Hebble Navigation which made the river navigable to Sowerby Bridge. The town centre is on a hill on the north side of the River Calder and most of the land slopes towards the river. The A642 Wakefield to Huddersfield road bypasses the town to the south of the town centre with a branch road to Horbury Junction. The B6128 goes through the town centre and connects with Ossett to the north. The M1 motorway passes to the east of the town.

In 2008 Horbury had a largely white population compared with Yorkshire and the Humber.

A network of local buses, coordinated by West Yorkshire Passenger Transport Executive (WYPTE) connects Horbury with Wakefield, Ossett, and Huddersfield. The M1 motorway to the east of the town is accessed at junctions 39 at Durkar and 40 at Ossett.

Proposals were made for a railway through Horbury in the 1830s and an Act of Parliament was passed for the Manchester and Leeds Railway engineered by George Stephenson in 1836. Horbury has had three stations, Horbury and Ossett at Horbury Bridge of 1840, Horbury Junction on Green Lane of 1853 and Millfield Road at Horbury Junction opened in 1927. All are closed.[24]

Horbury Town School on Tithe Barn Street was enlarged in 1789 but it is not known when it was built. By 1870 there were 113 pupils paying fees of 3d to 6d weekly. It closed in 1886.[25] The "Gaskell School" was built on New Road in 1842 by Daniel Gaskell of Lupset Hall. It was used until 1887.[26] St Peter's Church of England School was founded in 1849 close to the church. It was replaced by the present school in the early 1980s.[27] In September 2010 St Peter's Junior School amalgamated with Clifton Infant School to form a new primary school. A new building is proposed to be built on the current St Peter's site with a completion date of September 2012.

Horbury Academy (formerly Horbury School) caters for students aged 11 to 16 in a new building completed in 2009 on the same site as the old one.

Horbury had a chapel of ease to the Church of All Saints in Wakefield, from before the time of the Domesday Book. The chapel was replaced by a Norman chapel with a nave and tower that stood until it was replaced by the present church in 1790. St Peter and St Leonard's Church, the parish church, was designed by John Carr, the Horbury born architect who built the Georgian neo-classical style between 1790 to 1794 at a cost to himself of £8,000. He is buried in a vault beneath the north aisle.

The foundation of St John's Church at Horbury Bridge was in a mission meeting in a room in what is now the hairdressers in 1864. Funds were raised and the church was built with stone from Horbury Quarry in 1884. The curate, Sabine Baring-Gould wrote the hymn "Onward Christian Soldiers" in 1865 for the Whitsun procession to Horbury Church.[29] Another mission was set up at Horbury Junction in 1887 and St Mary's Church was built in 1893.[30]

The Methodist Church on High Street was demolished. The Salvation Army corps has headquarters on Peel Street and the Tithe Barn Christian Centre is on Westfield Road.

Horbury Library on Westfield Road was built in 1905 with a donation from the Carnegie foundation. It celebrated its centenary in 2005 with the making of a community tapestry, which now hangs in the library.[1] Horbury is policed by the West Yorkshire Police force from Ossett Police Station and is within the DA, Wakefield division, which covers the whole district.[31] The statutory emergency fire and rescue service is provided by the West Yorkshire Fire and Rescue Service from Wakefield fire station.[32] Hospital services are provided by the Mid Yorkshire Hospitals NHS Trust. Pinderfields Hospital is the nearest hospital with an Accident and Emergency department. Community health services, including GPs, district and community nurses, dentists and pharmacists, are co-ordinated by Wakefield District Primary Care Trust.[33][34] Waste management is co-ordinated by the local authority. Horbury's Distribution Network Operator for electricity is CE Electric via Yorkshire Electricity. Yorkshire Water manages Wakefield's drinking and waste water.[35]

Architect John Carr was born in Horbury in 1723. He bought Sunroyd House in 1789 and renamed it "Carr Lodge".[36] Horbury Bridge is known as the home of Onward, Christian Soldiers, the hymn written by Sabine Baring-Gould. Stan Barstow, author of Joby and A Kind of Loving, was born in Horbury. In his autobiography, he said that Ossett and Horbury were the "border country" where the north-west of the coalfield merges with the south-east of the wool towns. William Baines, born in 1899, was a pianist and prolific composer who died in 1922 of tuberculosis; he composed two hundred works, the majority for solo piano.[37]

Two children from Horbury, Christianne and Robert Shepherd, died of carbon monoxide poisoning while on holiday in Corfu in October 2006. Their deaths resulted in changes to health and safety policies in the travel industry.[38] A memorial garden was opened at Horbury Primary School, which they both attended.[39]