Hornchurch is a suburban town in East London, England, and part of the London Borough of Havering. It is located 15.2 miles (24.5 km) east-northeast of Charing Cross and is one of the locally important district centres identified in the London Plan.[2] It comprises a number of shopping streets and a large residential area. It historically formed a large ancient parish in the county of Essex that became the manor and liberty of Havering. The economic history of Hornchurch is underpinned by a shift away from agriculture to other industries with the growing significance of nearby Romford as a market town and centre of administration. As part of the suburban growth of London in the 20th century, Hornchurch significantly expanded and increased in population, becoming an urban district in 1926 and has formed part of Greater London since 1965.[3] It is the location of Queen's Theatre, Havering Sixth Form College and Havering College of Further and Higher Education.

Hornchurch is an Anglicised version of the Latin Monasterium Cornutum, a term that was also applied to the mother Abbey in Savoy. The earliest recorded use here was in 1222, meaning "church with horn-like gables" and it was recorded as "Hornechurch" in 1233. The horned bull's head mounted on the eastern end of St Andrew's Church, near the town centre dates from much later, around the 18th Century.

Stone Age tools, Bronze age and Iron age artefacts have been discovered in Hornchurch, indicating a lengthy occupation in pre-history. Roman remains, sufficient to indicate a settlement have also been found in South Hornchurch.[7] Hornchurch originates from around the 12th century when Henry II gave 1,500 acres (610 ha) to the hospice of St Nicholas and St Bernard, Mountjoux, in Savoy as a gift.[7] A prosperous Hornchurch Priory was established, near the parish church, but the monks were forced out during the 14th century when a new law banned foreign land ownership. The lands were then given to Lord Chancellor William of Wykeham who made major renovations to the church. He subsequently gave Hornchurch to endow New College, Oxford, which still owns all the local church lands and buildings. Due to this, Saint Andrew's Church was not adopted into the Diocese of Chelmsford until agreement was reached in the 1930s. The parish remains staffed by a vicar temporal and his curates. 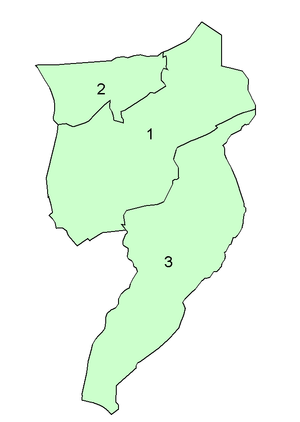 Hornchurch, was a large ancient parish in the Becontree hundred of Essex; it was divided into the three chapelries of Havering-atte-Bower, Hornchurch and Romford. The Hornchurch chapelry stretched from the River Thames in the south to Harold Wood in the north and was located between the River Ingrebourne in the east and the River Beam in the west. It was also known as 'Hornchurch side' and consisted of the North End, South End and Town wards. Town ward was absorbed into North End and South End around 1722. Hornchurch chapelry occupied 6,783 acres (2,745 ha) of the 16,100-acre (6,500 ha) ancient parish.[8] The local authority was the Hornchurch vestry. The royal manor of Havering, which was conterminous with the ancient parish of Hornchurch, enjoyed special status and a charter in 1465 removed it from the Becontree hundred and the county of Essex to instead form an independent liberty. By the 16th century 'Romford side', comprising the five northern wards of Romford Town, Harold Wood, Collier Row, Noak Hill and Havering, had grown larger than Hornchurch and had achieved some degree of independence from the Hornchurch vestry. Havering ward grew independent in its own right and became a separate parish in the late 18th century.

Following the Poor Law Amendment Act 1834, Hornchurch and Romford became separate civil parishes in 1836 and were grouped into the Romford Poor Law Union. The area of the union, excluding the town of Romford, became a rural sanitary district in 1875. The special status of the Liberty of Havering was abolished in 1892 and the area was reincorporated into Essex. In 1894 the Hornchurch vestry was abolished, to be replaced by Hornchurch Parish Council. The rural sanitary district became Romford Rural District and the local authority became Romford Rural District Council. As the population of Hornchurch was rising, the parish council was abolished in 1926 and the parish was removed from the rural district. The parish of Hornchurch became Hornchurch Urban District and the local authority became Hornchurch Urban District Council. The council met at Langtons House from 1929. The urban district was significantly expanded in 1934 when the parishes of Cranham, Great Warley, North Ockendon, Rainham, Upminster and Wennington were added. The area formed part of the London Traffic Area from 1924 and the London Passenger Transport Area from 1933.[9] The whole area was included in the London Borough of Havering in 1965 and it was transferred from Essex to Greater London.

During both the First World War and Second World War nearby Hornchurch Airfield was an important RAF station; it was known as RAF Suttons Farm during the Great War, with its HQ as far away as Upminster Hall. During the Second World War, the airfield was known as RAF Hornchurch, and was home mostly to a number of Spitfire squadrons, with an advanced sub-station at Rayleigh. The land has since been reused for a large housing development and Hornchurch Country Park. During the First World War a large vacant country estate called Grey Towers on Hornchurch Road was commandeered by the Army Council as a military depot. In January 1916 it became the first Command Depot for the New Zealand Contingent in England but was found to be more suitable as a Convalescent Hospital Camp for New Zealand Servicemen, and was run as such until June, 1919.[10] Like most suburbs of London, Hornchurch had been entirely rural until the arrival of the railway which spurred huge property development during the early 1900s. Whole estates were constructed such as Emerson Park to the north. Development was fuelled further by the arrival of the electrified District line during the 1930s with inter and post war housing developments south and west of Hornchurch in places such as Elm Park. 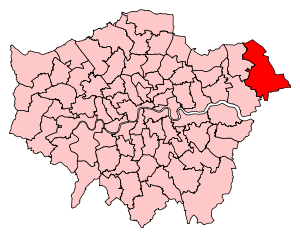 The former Hornchurch civil parish was bounded with Upminster and Rainham by the River Ingrebourne to the east, with Dagenham by the River Beam to the west, with Romford to the north and by the River Thames to the south. It included the contemporary districts of Ardleigh Green, Elm Park, Emerson Park, Hornchurch town centre, Hornchurch Marshes and South Hornchurch; and parts of Gidea Park, Harold Wood and Upminster Bridge. Hornchurch is a post town in the RM postcode area, consisting of the RM11 and RM12 postcode districts. RM11 covers north of the high street including Ardleigh Green and Emerson Park, and RM12 covers south of the high street including Elm Park. The Hornchurch Marshes and South Hornchurch are within the Rainham post town and postcode district RM13.

The Havering committee area for Hornchurch is defined as the wards of Hacton and St Andrew's.[11]

Due to the status of Hornchurch as a "Commuter town", it has a large population that commute to Central London each day to work. As a result, the town is above the UK average for GDP per capita, and has a large number of people with professional degrees living in the area.

Hornchurch is identified in the London Plan as a local district centre with 31,000 square metres (330,000 sq ft) of commercial floorspace.[2] It is not considered a significant commercial office location.[2] Within Havering, it is identified as one of seven town centres in the borough,[12] with a retail area extending along High Street, North Street and Station Lane.[13] 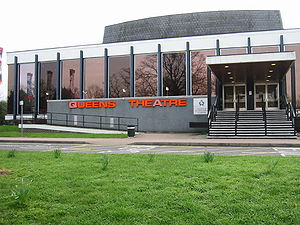 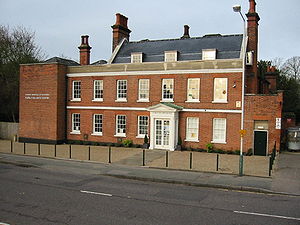 Hornchurch Drum & Trumpet Corps Boys marching band formed in 1959 and perform all over the country.[citation needed] They were the first winners of the National British Marching Band Championships in 1976 and performed at the Edinburgh Tattoo in 1977.[citation needed]

Hornchurch is served by Time 107.5 FM, located in Romford. The station covers Havering and surrounding areas.
Bedrock[14] is the local hospital radio service available online to the Havering area and broadcasting a range of health-related information and locally produced entertainment.

A.F.C. Hornchurch is the local football team, formed to replace Hornchurch F.C. with Havering Hockey Club (formerly Hornchurch Hockey Club) accommodating the field hockey fixtures from their Harrow Lodge Park base. The Rom skatepark is located in the west of Hornchurch and is a Grade II listed structure.

In terms of top level sport, West Ham United are considered the local side due to the club's proximity to Hornchurch and the ease of reaching Upton Park on the District line.