From Infogalactic: the planetary knowledge core
Jump to: navigation, search
This article is about the types of dance. For the musical instrument, see Hornpipe (instrument). 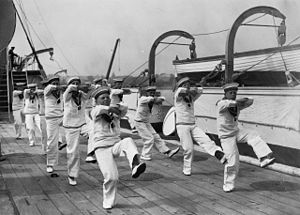 The hornpipe is any of several dance forms played and danced in Britain and Ireland and elsewhere from the 17th century until the present day. The earliest references to hornpipes are from England and refer to Lancashire hornpipes in 1609 and 1613.[1]

It is suggested that hornpipe as a dance began around the 16th century on English sailing vessels.[2] However, this is urban myth, as the dance does not seem to have become associated with sailors until after 1740 when the dancer Yates performed 'a hornpipe in the character of a Jack Tar' at Drury Lane Theatre, after which, in 1741 at Covent Garden we hear of 'a hornpipe by a gentleman in the character of a sailor.'.[3] Movements were those familiar to sailors of that time: "looking out to sea" with the right hand to the forehead, then the left, lurching as in heavy weather, and giving the occasional rhythmic tug to their breeches both fore and aft.

The hornpipe is an Irish, Scottish and English dance. It is done in hard shoes, which are used to help keep track of how the dancer keeps in time. There are two variations of the hornpipe dance: fast and slow. Usually, more experienced dancers will do the slow hornpipe but younger dancers will start out with the fast hornpipe and then switch in later years. There is a change of tempo in the music but not the dancing between these two speeds. The only difference in the dancing between the fast and slow steps are the dances that the competitor does and the rhythm/sound of how they move their legs. The rhythm for both fast and slow hornpipes is very even and should be executed that way by the dancer.

Examples, current in Northumberland, of all these kinds of hornpipe may be found, either recorded or notated, on the FARNE archive website [1]. The earliest musician's manuscript to contain hornpipes is the Henry Atkinson MS (Facsimile of which may be found at FARNE). John Offord's John of the Green – The Cheshire Way (ISBN 978-0-9556324-0-2), is an extensive study of published and manuscript dance music in these forms from before 1750. This draws heavily on Thomas Marsden's Original Lancashire Hornpipes, Old and New, published by Henry Playford in 1705, as well as other sources.

In 1798 the Reverend Warner Warner journeyed through Wales. In describing a Welsh ball, he wrote, "The ball was concluded by a contest of agility between two brothers, who danced two distinct hornpipes with so much power and muscle, variety of step and inflexible perseverance, as exceeded everything we had seen.[6]

The triple-time hornpipe dance rhythm was often used by composers in England in the Baroque period. It is probably artificial to draw too rigid a distinction between the popular and art-music examples. Many country dance examples are found in The Dancing Master, such as "The Hole in the Wall" (Hornpipe No.8 from the incidental music to Abdelazer by Henry Purcell), and there are also extant theatrical choreographies that use steps from French court ballet, but which characteristically have step-units going across the measure. Henry Purcell and George Frideric Handel composed hornpipes, and Handel occasionally gave "alla hornpipe" as a tempo indication (see Handel's Water Music). Today, the most well-known baroque hornpipe tune is probably the 'Alla Hornpipe' movement from the D major of Handel's Water Music suites. Hornpipes are occasionally found in German music of this period.