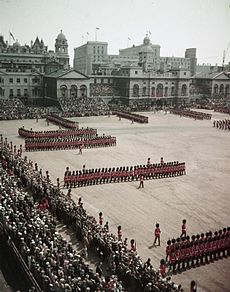 Trooping the Colour at Horse Guards Parade in 1956.

Horse Guards Parade is a large parade ground off Whitehall in central London, England, at grid reference TQ299800. It is the site of the annual ceremonies of Trooping the Colour, which commemorates the monarch's official birthday, and Beating Retreat. 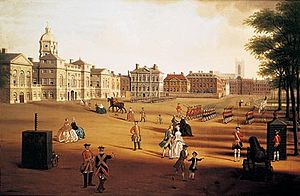 The 2nd Footguards (Coldstream) on Parade at Horse Guards, by John Chapman, c. 1755.

Horse Guards Parade was formerly the site of the Palace of Whitehall's tiltyard, where tournaments (including jousting) were held in the time of Henry VIII. It was also the scene of annual celebrations of the birthday of Queen Elizabeth I. The area has been used for a variety of reviews, parades and other ceremonies since the 17th century.

It was once the Headquarters of the British Army. The Duke of Wellington was based in Horse Guards when he was Commander-in-Chief of the British Army. The current General Officer Commanding London District still occupies the same office and uses the same desk. Wellington also had living quarters within the building, which today are used as offices. 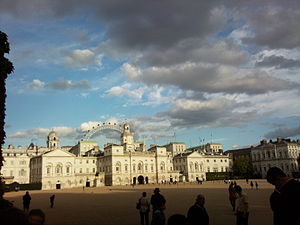 Horse Guards Parade with the London Eye Ferris wheel in the background.

For much of the late 20th century, Horse Guards Parade was used as a car park for senior civil servants; about 500 were granted the privilege, which was known as the 'Great Perk'.[1] The PIRA's mortar attack on 10 Downing Street on 7 February 1991, which was carried out from a vehicle parked in Horse Guards Avenue near to Horse Guards Parade, although producing no casualties, led to concern about security. In April 1993 the Royal Parks Review Group, headed by Dame Jennifer Jenkins, Lady Jenkins of Hillhead, recommended that Horse Guards Parade should be restored for public use, and linked to St James's Park by closing Horse Guards Road.[2] The proposal was taken up by the Department of National Heritage but then resisted by senior Cabinet members, apparently under pressure from the civil servants who were to lose their parking places.[3]

Public revelation of the resistance led to considerable criticism, with Simon Jenkins urging the Head of the Home Civil Service, Sir Robin Butler, to remove the car park as part of his reforms.[1] In late 1996 Horse Guards Parade was cleared in order to be resurfaced. Finally in March 1997 it was announced that car parking on Horse Guards Parade was to be ended.[4] Vehicles are no longer permitted to park anywhere in the area.

The parade ground is open on the west side, where it faces Horse Guards Road and St. James's Park. It is flanked on the north by the Old Admiralty and the Admiralty Citadel, on the east by William Kent's Horse Guards – formerly the headquarters of the British Army – and on the south by the Foreign & Commonwealth Office and the rear garden wall of 10 Downing Street, the official residence of the British Prime Minister. Access to this side of Horse Guards Parade is now restricted for security reasons. 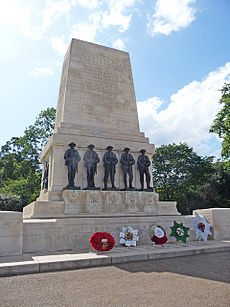 A number of military monuments and trophies ring the outside of the parade ground, including:

An oddity is the black background to the number 2 of the double sided clock which overlooks the Parade Ground and the front entrance, it is popularly thought to commemorate the time the last absolute monarch of England, Charles I, was beheaded at the Banqueting House opposite.

Horse Guards Parade hosted the beach volleyball at the 2012 Summer Olympics held in London. Temporary courts and seating designed by Populous were installed by the Arena Group,[6][7] much as seating is installed annually for Trooping the Colour. There was one court with a capacity of 15,000 with two tiers and a floodlight tower at each of its four corners, two practice courts to the east of the arena, and a further six practice courts at St. James's Park.[8] Most matches were played on Centre Court, but some matches were played on Court 1 on day 6 of the competition.

Horse Guards Parade hosted the 1st London Polo Championships on 17 and 18 June 2009[9] with teams from around the world.

In affiliation with Brad Pitt's 2013 film World War Z, British rock group Muse, who performed on the soundtrack of the film, performed a free concert here shortly after the premiere of the film itself at Leicester Square.[10]

On Sunday 20 July 2014, a temporary arena played host to the anniversary games. It consisted of 4 blocks of single tier seating, a long jump and shot putt pit, containing 15,000 tonnes of sand. It also had a 110-metre raised track, a pole vault and high-jump. The event was broadcast live on channel 4 in the UK.