The House of Babenberg was the ruling noble family of Austria from 976 to 1246. Originally from Bamberg in Franconia in present-day Bavaria, the Babenbergs were counts, margraves, and dukes in the Danube region of present-day Upper Austria, Lower Austria, and Styria.

One or two families

The Babenberg family can be broken down into two distinct groups: 1) The Franconian Babenbergs, the so-called Elder House of Babenberg, or Popponids out of which came the Hennebergs and the Counts of Schweinfurt. 2) Austrian Babenbergs which ruled Austria. The second group claimed to have originated from the first but scholars have not been able to verify that claim.

Like the French royal Capetian dynasty, the Elder Babenbergs descended from the Robertians. The earliest known Babenberg was one Poppo, maybe a descendant of the Frankish count Cancor. In the early 9th century he appeared as a count in the Grabfeld, a historic region in northeastern Franconia bordering on Thuringia. One of his sons, Henry, sometimes called margrave and duke in Franconia under King Charles the Fat of East Francia, fell fighting against the Normans in 886; another, Poppo, was margrave in Thuringia from 880 to 892, when he was deposed by King Charles successor Arnulf of Carinthia. The Popponids had been favoured by Charles the Fat, but Arnulf reversed this policy in favour of the rival family of the Conradines from the Lahngau in Rhenish Franconia.

The leaders of the Babenbergs were the three sons of Duke Henry, who called themselves after their castle of Babenberg on the upper Main, around which their possessions centred. The city of Bamberg was built around the ancestral castle of the family.

The rivalry between the Babenberg and Conradine families was intensified by their efforts to extend their authority in the region of the middle Main, and this quarrel, known as the "Babenberg feud", came to a head at the beginning of the 10th century during the troubled reign of the German king Louis the Child. In the battle of Fritzlar in 906, the Conradines won a decisive victory, although count Conrad the Elder fell in the battle. Two of the Babenberg brothers were also killed. The third, Adalbert of Prague, was summoned before the imperial court by the regent Hatto I, Archbishop of Mainz, a partisan of the Conradines. He refused to appear, held his own for a time in his castle at Theres against the king's forces, but surrendered in 906, and in spite of a promise of safe-conduct by Hatto was beheaded.

The Conradines became dukes of Franconia, while the Babenbergs lost their influence in Franconia. 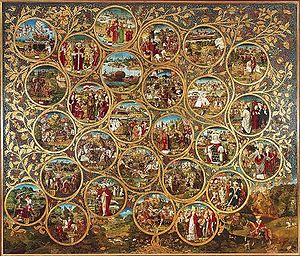 The Babenberg family tree triptych at Klosterneuburg Monastery (c. 1490, based on the genealogy by Ladislaus Sunthaym)

In 976 Leopold I, a member of the Babenberg family, who was a count in the Donnegau, is described as count of the Eastern March, a district not more than 60 miles in breadth on the eastern frontier of Bavaria which grew into the duchy of Austria. Leopold, who received the mark as a reward for his fidelity to the emperor Otto II during the Bavarian rising in 976, extended its area at the expense of the Hungarians, and was succeeded in 994 by his son Henry I. Henry, who continued his father's policy, was followed in 1018 by his brother Adalbert and in 1055 by his nephew, Ernest, whose marked loyalty to the emperors Henry II and Henry III was rewarded by many tokens of favour.

The succeeding margrave, Leopold II, quarrelled with Henry III, who was unable to oust him from the mark or to prevent the succession of his son Leopold III in 1096. Leopold supported Henry, the son of Henry IV, in his rising against his father, but was soon drawn over to the emperor's side, and in 1106 married the daughter of emperor Henry IV, Agnes, widow of Frederick I of Swabia. He declined the imperial crown in 1125. His zeal in founding monasteries earned for him his surname "the Pious", and canonization by Pope Innocent VIII in 1485. He is regarded as the patron saint of Austria.

One of Leopold's sons was Otto, bishop of Freising. His eldest son, Leopold IV, became margrave in 1136, and in 1139 received from the German king Conrad III the duchy of Bavaria, which had been forfeited by Henry the Proud. Leopold's brother Henry (surnamed Jasomirgott, allegedly from his favourite oath, "So help me God!") was made count palatine of the Rhine in 1140, and became margrave of Austria on Leopold's death in 1141. Having married Gertrude, the widow of Henry the Proud, he was invested in 1143 with the duchy of Bavaria, and resigned his office as count palatine. In 1147 he went on crusade, and after his return, renounced Bavaria at the instance of the new king Frederick I who gave the duchy of Bavaria to Henry the Lion of Saxony. As compensation for this, Austria, the capital of which had been transferred to Vienna in 1156, was elevated into a duchy in the Privilegium Minus.

The rise of Babenberg power

The second duke was Henry's son Leopold V, who succeeded him in 1177 and took part in the crusades of 1182 and 1190. In Palestine he quarrelled with Richard I of England, captured him on his homeward journey and handed him over to the emperor Henry VI. Leopold increased the territories of the Babenbergs by acquiring Styria under the will of his kinsman Duke Ottokar IV. He died in 1194, and Austria fell to one son, Frederick, and Styria to another, Leopold; but on Frederick's death in 1198 they were again united by Leopold as Duke Leopold VI, surnamed "the Glorious".

The new duke fought against the infidels in Spain, Egypt, and Palestine, but is more celebrated as a lawgiver, a patron of letters, and a founder of towns. Under him Vienna became the centre of culture in Germany and the great school of Minnesingers. His later years were spent in strife with his son Frederick, and he died in 1230 at San Germano, now renamed Cassino, whither he had gone to arrange the peace between the emperor Frederick II and Pope Gregory IX.

The Last of the Babenbergs

The male line of the Babenbergs became extinct in 1246, when Frederick II "the Quarrelsome" was killed in battle (the Henneberg branch of the Franconian Babenbergs lived on until 1583 when its lands where divided among the two branches of the Wettin family).

His heir general was Gertrude of Austria, the only child of his late elder brother, Henry of Austria by that man's wife, Agnes of Thuringia. However, neither her husbands nor her son succeeded in settling the Babenberg inheritance under their power.

After some years of struggle known as the Interregnum, the Duchies of Austria and Styria fell to Otakar II of Bohemia, and subsequently to Rudolph I of Habsburg, whose descendants were to rule Austria until 1918. 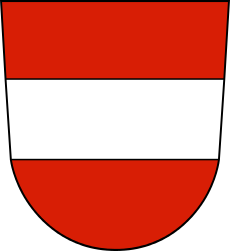 Babenberg coat of arms, later used by the Habsburgs and the state of Austria

The Babenbergs and the Habsburgs

The Spanish line was the last Habsburg line to gain Babenberg blood. Again it was via the previous Habsburg line to gain Babenberg blood (i.e. the Styrian) that the Spanish Habsburg gained their descent from the Babenbergs — Anna of Austria, the wife of Philip II of Spain and mother of Philip (from whom all subsequent Spanish Habsburgs were descended), was a male-line granddaughter of Ferdinand and Anna. As a result, after 1598, all Habsburg scions descended from the Babenberg Dukes.