The House of Bonaparte (originally Buonaparte) is a former imperial and royal European dynasty of Italian (Genoese) origin. It was founded in 1804 by Napoleon I, the son of Corsican nobleman Carlo Buonaparte and Letizia Buonaparte (née Ramolino). Napoleon was a French military leader who rose to power during the French Revolution and who, in 1804, transformed the First French Republic into the First French Empire, five years after his coup d'état of November 1799 (18 Brumaire). Napoleon and the Grande Armée had to fight against every major European power (except for the ones he was allied with, including Denmark-Norway) and dominated continental Europe through a series of military victories during the Napoleonic Wars. He installed members of his family on the thrones of client states, expanding the power of the dynasty.

The House of Bonaparte formed the Imperial House of France during the French Empire, together with some non-Bonaparte family members. In addition to holding the title of Emperor of the French, the Bonaparte dynasty held various other titles and territories during the Napoleonic Wars, including the Kingdom of Italy, the Kingdom of Spain, the Kingdom of Westphalia, the Kingdom of Holland, and the Kingdom of Naples. The dynasty held power for around a decade until the Napoleonic Wars began to take their toll. Making very powerful enemies, such as Austria, Britain, Russia, and Prussia, as well as royalist (particularly Bourbon) restorational movements in France, Spain, the Two Sicilies, and Sardinia, the dynasty eventually collapsed due to the final defeat of Napoleon at the Battle of Waterloo and the restoration of former dynasties by the Congress of Vienna.

During the reign of Napoleon I, the Imperial Family consisted of the Emperor's immediate relations – his wife, son, siblings, and some other close relatives, namely his brother-in-law Joachim Murat, his uncle Joseph Fesch, and his stepson Eugène de Beauharnais.

Between 1852 and 1870, there was a Second French Empire, when a member of the Bonaparte dynasty again ruled France: Napoleon III, the youngest son of Louis Bonaparte. However, during the Franco-Prussian War of 1870–1871, the dynasty was again ousted from the Imperial Throne. Since that time, there has been a series of pretenders. Supporters of the Bonaparte family's claim to the throne of France are known as Bonapartists. Current head Jean-Christophe, Prince Napoléon, has a Bourbon mother.

The Bonaparte (originally Italian: Buonaparte) family were patricians in the Italian towns of Sarzana, San Miniato and Florence. The name derives from Italian: buona ("good") and parte ("part" or "side"). In Italian, the phrase "buona parte" is used to identify a fraction of considerable, but undefined, size in a totum.

Gianfaldo Buonaparte was the first known Buonaparte at Sarzana around 1200. His descendant Giovanni Buonaparte in 1397 married Isabella Calandrini, a cousin of later cardinal Filippo Calandrini. Giovanni became mayor of Sarzana and was named commissioner of the Lunigiana by Giovanni Maria Visconti in 1408. His daughter, Agnella Berni, was the great-grandmother of Italian poet Francesco Berni and their great-grandson Francesco Buonaparte was an equestrian mercenary at the service of the Genoese Bank of Saint George. In 1490, Francesco Buonaparte went to the island of Corsica, which was controlled by the bank. In 1493, he married the daughter of Guido da Castelletto, representative of the Bank of Saint George in Ajaccio, Corsica. Most of their descendants during subsequent generations were members of the Ajaccio town council. Napoleon's father, Carlo Buonaparte, received a patent of nobility from the King of France in 1771.[1]

There also existed a Buonaparte family in Florence; however, its eventual relation with the Sarzana and San Miniato families is unknown. Jacopo Buonaparte of San Miniato was a friend and advisor to Medici Pope Clement VII. Jacopo was also a witness to and wrote an account of the sack of Rome, which is one of the most important historical documents recounting that event.[3] Two of Jacopo's nephews, Pier Antonio Buonaparte and Giovanni Buonaparte, however, took part in the 1527 Medici rebellion, after which they were banished from Florence and later were restored by Alessandro de' Medici, Duke of Florence. Jacopo's brother Benedetto Buonaparte maintained political neutrality.[4] The San Miniato branch extinguished with Jacopo in 1550. The last member of the Florence family was a canon named Gregorio Bonaparte, who died in 1803, leaving Napoleon as heir.[5]

A Buonaparte tomb lies in the Church of San Francesco in San Miniato. A second tomb, the Chapelle Impériale, was built by Napoleon III in Ajaccio 1857. 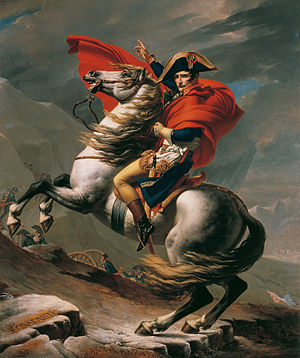 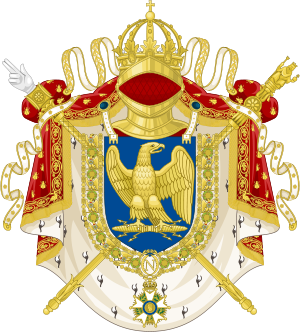 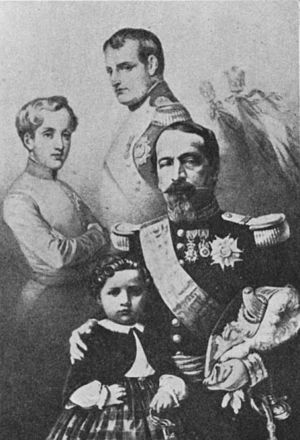 Napoleon I is the most prominent name associated with the Bonaparte family because he conquered much of Europe during the early 19th century. Due to his indisputable popularity in France both among the people and in the army, he staged the Coup of 18 Brumaire and overthrew the Directory with the help of his brother Lucien Bonaparte, president of the Council of Five Hundred. Napoleon then oversaw the creation of a new Constitution that made him the First Consul of France on 10 November 1799. On 2 December 1804, he crowned himself Emperor of the French and ruled from 1804 to 1814, and again in 1815 during the Hundred Days after his return from Elba.

Following his conquest of most of Western Europe, Napoleon I made his elder brother Joseph king first of Naples and then of Spain, his younger brother Louis King of Holland (subsequently forcing his abdication in 1810 after his failure to subordinate Dutch interests to those of France), and his youngest brother Jérôme King of Westphalia, a short-lived realm created from several states of northwestern Germany.

Napoleon's son Napoléon François Charles Joseph was created King of Rome and was later styled as Napoléon II by loyalists of the dynasty, though he only ruled for two weeks after his father's abdication.

Louis-Napoléon, son of Louis, was President of France and then Emperor of the French from 1852 to 1870, reigning as Napoleon III. His son, Napoléon, Prince Imperial, died fighting the Zulus in Natal, today the South African province of KwaZulu-Natal. With his death, the family lost much of its remaining political appeal, though claimants continue to assert their right to the imperial title. A political movement for Corsican independence surfaced in the 1990s which included a Bonapartist restoration in its programme.[citation needed]

Crowns held by the family

Emperors of the French

Heads of the House of Bonaparte (since 1852)

See also: Line of succession to the French throne (Bonapartist)

The arms of the Bonaparte family were: Gules two bends sinister between two mullets or. In 1804, Napoleon I changed the arms to Azure an imperial eagle or. The change applied to all members of his family except for his brother Lucien and his nephew, the son from Jerome's first marriage.

According to studies by G. Lucotte and his coauthors based on DNA research since 2011, Napoleon Bonaparte belonged to Y-DNA (direct male ancestry) haplogroup E1b1b1c1* (E-M34*). This 15000-year-old haplogroup has its highest concentration in Ethiopia and in the Near East (Jordan, Yemen). According to the authors of the study, "Probably Napoléon also knew his remote oriental patrilineal origins, because Francesco Buonaparte (the Giovanni son), who was a mercenary under the orders of the Genoa Republic in Ajaccio in 1490, was nicknamed The Maure of Sarzane." The latest study identifies the common Bonaparte DNA markers from Carlo (Charles) Bonaparte to 3 living descendants.[6][7]

Lucotte et al. published in October 2013 the extended Y-STR of Napoleon I based on descendant testing, and the descendants were E-M34, just like the emperor's beard hair tested a year before. The persons tested were the patrilineal descendants of Jérome Bonaparte, one of Napoleon's brothers, and of Alexandre Colonna-Walewski, Napoleon's illegitimate son with Marie Walewska. These three tests all yielded the same Y-STR haplotype (109 markers) confirming with 100% certainty that the first Emperor of the French belonged to the M34 branch of haplogroup E1b1b.

STR strongly suggests that the Bonaparte belong to the Y58897 branch, which means that the ancestor 3000 years ago or a bit more lived in Anatolia, but all relatives in the database with a common ancestor with over a 1000 years are found in their own the Massa - La Spezia small area in Italy.[8][9][10] There are at the moment no relatives in the database older than that, which means they are very rare in Europe.

There are, however, numerous descendants of Napoleon's illegitimate but unacknowledged son, Count Alexandre Colonna-Walewski (1810–1868), born from Napoleon I's union with Marie, Countess Walewski. A descendant of Napoleon's sister Caroline Bonaparte was actor René Auberjonois. Recent DNA-matches with living descendants of Jérôme and Count Walewski have confirmed the existence of descendants of Lucien Bonaparte, Napoleon's brother, namely the Clovis family.[7]